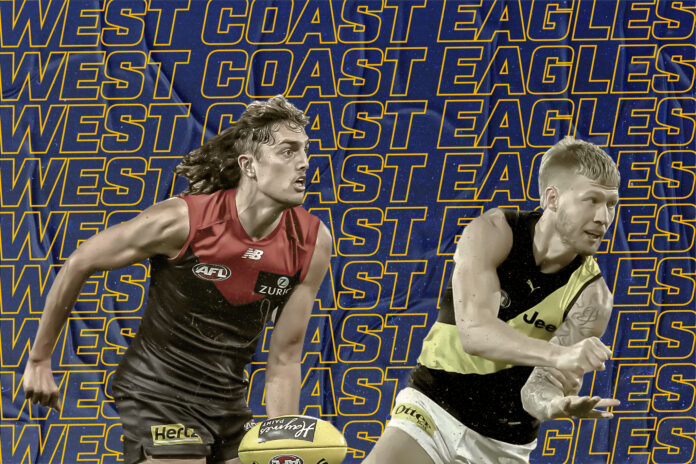 The Eagles have had a less than ideal season 2021, however still amazingly find themselves inside the eight despite some harrowing displays.

It seems as though Adam Simpson and his side's time in the sun is up, with many of their major stars heading into the twilight years of their careers and the competition starting to pass them by.

However, the slide down the table and into a rebuild might not be as painful or lengthy as it could be should the Eagles backroom staff get it right over the next few years.

We continue our ‘Five trade targets for every club’ series with West Coast.
The idea of these stories is to identify potentially gettable targets who could fill roles, not just link every club to superstars, the likes of Marcus Bontempelli or Patrick Cripps.

In no particular order, here are five players which the Eagles recruitment team would do well to target and potentially poach.

The Cats speed demon is off-contract at the end of season 2022 and might be looking for a way out of Kardinia Park should his playing time not increase over the next 12 months.

The 2020 Grand Final Sprint winner hasn't exactly hit his straps at the Cattery since he went pick 15 in the 2018 national draft, but still has age on his side being only 20 years old.

He featured heavily in his 2019 debut year, playing 18 matches under Chris Scott prior to an elbow injury. However the midfielder only managed three appearances in a stunted 2020 and seven so far this year, meaning he is clearly on the outer at Geelong.

Should he fail to break into the team next year expect rival clubs to be sniffing around especially those in his home state of WA, with the Dockers reportedly already on the case.

The Eagles could use a next-generation midfielder to complement the likes of Andrew Gaff, Elliott Yeo, Tim Kelly and most importantly the up-and-coming Luke Edwards as the side goes through a transitional phase.