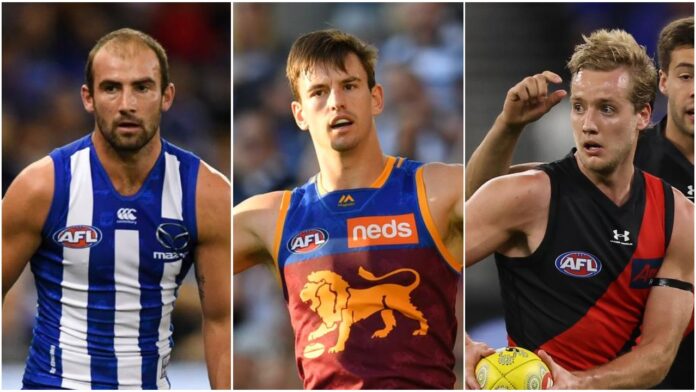 While discussions on who will claim the 2021 Brownlow Medal will continue to manifest, each club's fanbase are sure to be keen to see who polls the most votes for their club.

Some sides will have short-priced favourites to edge out their teammates, while others will see their stars come down to the wire on Sunday's count.

To give fans the advantage of knowing who may come out on top for each club, we've put together the leaders from this season's Zero Hanger MVP race, culminating a top-five list for all 18 sides.

Throughout the season, four members from Zero Hanger voted on every match, awarding 5,4,3,2 and 1 votes for the best players in each game.

With these results, we've been able to identify who will be close to finishing near the podium on Brownlow night, as well as each club's predicted leader.

The defender-turned-midfielder has enjoyed a career-best season this year, claiming the club's best and fairest honours to go along with a 19th-placed finish in our overall MVP leaderboard.

Despite another poor campaign for the Crows, Laird was a shining light and will be looking to steer his side back toward the top-eight next season.

Another stellar season for the Brisbane ball-magnet, who was rewarded with a spot in the All-Australian 40-man squad this year.

A bargain recruit for Brisbane, Lyons was among a star-studded midfield that is looking to lead the club to premiership glory for the first time since 2003.

The Carlton rising star took his game to new heights this season, emerging as the Blues' best onballer and earning a place in the All-Australian midfield.

A near-guarantee to take home the John Nicholls Medal, Walsh was a clear leader among the Blues in our MVP votes, finishing equal third in the league.

It was a poor year for the Magpies, recording a 17th-placed finish and recording just the six wins for the season.

However, one constant for Collingwood was the dominance of midfielder Taylor Adams, who added another strong season in the black and white despite being limited to just 14 appearances.

Bombers fans have plenty to be excited about following their 2021 campaign, with the likes of Parish and Zach Merrett commanding the ball from midfield en route to a finals finish.

Parish had a breakout year, claiming the ANZAC Day Medal, Yiooken Award and was named best afield for the Country Game, while putting on an immense outing for the Bombers in their elimination final defeat.

A big-game player it must be said.

The Dockers veteran doesn't look to be slowing down anytime soon, having a dazzling campaign at the tender age of 36.

Mundy stood up when it mattered most for the Dockers, leading a young midfield in the absence of skipper Nat Fyfe.

The Cats star made the midfield his own in 2021, adding to his All-Australian and Best and Fairest campaign of yesteryear.

Guthrie was only one of two Geelong players to surpass 100 MVP votes for the season, a surprising statistic given the club's dominance.

One of just five players to poll over 200 MVP votes, Miller was a bright light in what was another dark season for the Suns.

Despite being tipped to go close to the podium on Sunday evening, Miller is among those ineligible to take 'Charlie' home after receiving a suspension this year.

The silky Giants onballer was at his best once again in 2021, leading a packed engine room and young side to a finals return.

Highlighted by triggering an eight-year extension, this season has been a memorable one for Josh Kelly.

The Hawthorn ball-magnet had another strong campaign in the brown and gold, once again amassing record numbers around the ground.

A difficult season for the Hawks, however Mitchell was among plenty of positives for the Waverley club.

A season like no other for 'Clarry', the Demons' midfielder has sky-rocketed into Brownlow contention this season as Melbourne eye Grand Final success next weekend.

The AFLCA Champion Player of the Year, a Brownlow Medal is in reach for the Demons superstar.

The Kangaroos veteran led a young North Melbourne midfield to a promising campaign, albeit collecting the wooden spoon along the way.

Although with its setbacks, Cunnington's season was one to behold as the Roos' future looks bright with the aid of their contested ball-winner.

The first-ever Zero Hanger MVP winner, Wines has been a consistent threat in the Power's strong 2021 campaign.

The Port Adelaide jet has enjoyed a career-best season and should be right in contention for a high Brownlow Medal finish, perhaps even claiming the top gong should our votes suggest anything.

A disappointing season in the end for the back-to-back reigning premiers, who failed to finish in the top-eight by season's end.

'Dusty' was as prolific as ever, and despite injuries managed to finish atop the standings among his teammates to claim the Tigers' MVP crown thanks to a strong start to the year.

Another strong season for the Saints co-captain, Steele's second half of the year has placed him as a dark horse for the Brownlow Medal.

Unable to get his side into the eight, the silky onballer rmanaged to have a career-best season and will be keen to start next year with a bang.

A move into the midfield has seen Callum Mills flourish in what was a sensational season for the Swans.

Despite the finals heartbreak, 2021 was a huge success for Sydney, with many plaudits going to their new star in midfield.

A bitter end to the Eagles season saw them crash out of finals contention, but it was their midfield that shined once again.

Gaff led the long list of Eagles onballers in the club's MVP standings, but will be hoping a strong season next year will have his side playing in the September action.

The Bulldogs ball-magnet came mightily close to reaching 200 MVP votes, but was able to finish atop his side's standing and even out-polling Brownlow fancy Marcus Bontempelli.

Another All-Australian nod and a bevy of 30+ disposal outings saw Macrae enjoy a stellar 2021 campaign.

Can he pip his skipper on Brownlow night?