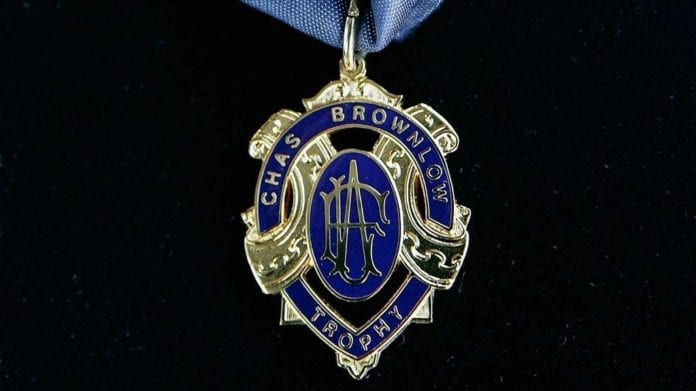 The ultimate individual award in the AFL, the Brownlow Medal, is set to be handed out on Sunday, September 19. This is Zero Hanger's guide to watching the event on TV, or live streaming it online.

The AFL's elite awards night is being held at multiple locations around Australia, including a Western Australian event at Perth's Optus Stadium, on Sunday night at 7:30pm (AEST), 5:30pm (local - AWST). Invited players will attend the location closest to where they are currently residing.

What is the Brownlow Medal?

The Charles Brownlow Trophy - better known as the Brownlow Medal - is the most prestigious award on the AFL calendar, awarded each year to the league's fairest and best player/s.

Voted on throughout the course of the year by the umpires on a 3-2-1 basis from each game, the votes are then tallied up and the winner is announced at the AFL's 'night of nights.'

The count seems to be a three-horse race with Western Bulldogs skipper Marcus Bontempelli set to battle it out with Port Adelaide star Ollie Wines, and Melbourne ball magnet Clayton Oliver.

Bontempelli has been seen as a contender all year but a late surge of form has seen Wines take over favouritism.

How to watch the 2021 Brownlow Medal on TV

If you're in Melbourne or Hobart, then you'll be able to watch the broadcast on Channel 7 from 7pm (AEST). Sydney, Melbourne and Canberra residents will also be able to tune in from 7pm, but on sister station, 7Mate.

Perth's broadcast will kick off at 5pm on 7 before switching over to 7Mate at 6pm, and returning to Channel 7's flagship station at 7pm.

Adelaide and Darwin viewers can watch from 6:30pm on 7Mate before the broadcast moves over to Channel 7 at 7pm.

How to live stream the 2021 Brownlow Medal

Unfortunately, Channel 7 don't have the digital rights, meaning they aren't able to stream the Brownlow on 7Plus.

It means your only option to watch the Brownlow is on Channel 7, or 7Mate, depending on your location.

Make sure to stay tuned to Zero Hanger in the lead-up and throughout the count for all your Brownlow Medal news and updates.