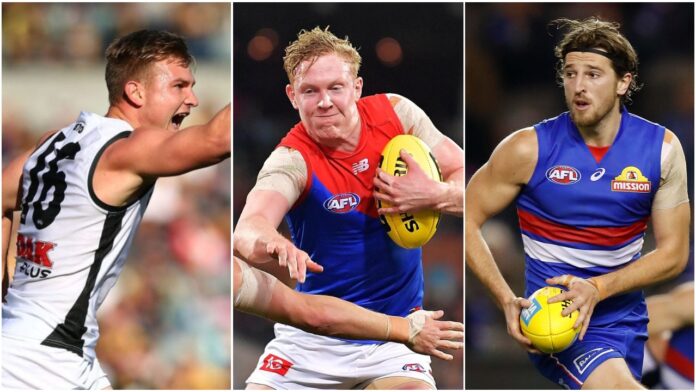 The 2021 Brownlow Medal looks like it will go down to the wire this year with multiple stars expected to poll strongly in what should be an exciting event to occupy the weekend off footy before the Grand Final next week.

With the season over and Brownlow night nearing, we've taken a shot at predicting the winner, podium and top five for this year's count.

Check out who we believe will be at the top of the pecking order when the count has concluded.

The Port midfielder has been an absolute bull this year, averaging a career-high 32.4 disposals per game and even took home the Zero Hanger MVP Award with 255 votes.

A Short-priced favourite for the Brownlow by most betting agencies and with good reason. Expect him to poll three votes in several rounds. Had big games including a 43-disposal, six-tackle and 20 Zero Hanger vote game against Gold Coast in Round 14, as well as a 36-disposal, five-tackle, one-goal and 19 Zero Hanger vote game against St. Kilda in Round 18.

Expect him to poll a fair few two and one-vote games from when Travis Boak was best on ground and when the opposition won - which wasn't often. A consistent performer throughout the year who will take some beating.

The Bont has had a stellar year averaging a career-high 26.8 disposals to go along with 1.1 goals per game. He's just so impactful in games and when he's on, you know he's on - and hopefully, so do the umpires.

Polled lower than expected on the Zero Hanger MVP in 7th position with 196 votes but he has been the favourite for the Brownlow for most of the year before dropping away in the last three rounds of the season.

Expect the Bont to poll three votes in at least six games and be a definite contender to take 'Charlie' home.

Don't be surprised if this talented Demons midfielder takes home the crown. A career-best year for the country kid, averaging 31.5 disposals per game.

A contested bull who was consistent the whole way through the season and finished second on the Zero Hanger MVP leaderboard with 238 votes for a second-place finish.

Produced the best individual performance of the year, ironically in a loss, where he amassed 38 disposals, 27 contested disposals, nine tackles and three goals, which went for 204 Supercoach points and 19 Zero Hanger votes against Adelaide in Round 10.

Expect him to poll three votes in at least five games, and should definitely be in the top three with a big chance to win it all.

The Saints superstar has had a great season this year, earning All-Australian honours whilst averaging a career-high 29.1 disposals and 8.4 tackles per game.

In what was an underwhelming year for the Saints, Steele was a shining light and should poll well as teammates aren't a large threat to steal votes.

Finished in the top five of the Zero Hanger MVP with 218 votes. Had a consistent year, probably won't poll too many votes in the first half of the season, but came home as arguably the most in-form player in the second half of the season.

Big performances include a 33-disposal, one-goal and 16 Zero Hanger vote game against West Coast in Round 4, and a 36-disposal, 14-tackle and 154 Supercoach point game against Collingwood in Round 16.

Expect him to poll three votes in at least six games, and is a definitive dark horse to take claim top spot.

The 'Trac' is such a dynamic player and is bound to attract some votes in the Brownlow count.

Averaged a career-high 28.8 disposals to go along with 1.1 goals per game. Will be hard to see Petracca winning it all, with all the tough competition around him and Oliver taking a lot of the Demons' votes too, but he'll still poll strongly.

Expect him to poll three votes in at least four games, and would be good value to finish in the top five when Gillon McLachlan reads out the last name.

In what looks to be one of the highest-scoring and closest Brownlows to date, it's hard to choose an outright winner, which is why I wouldn't be surprised if we have a tie or even a three-way tie.

If there is to be a tie, I reckon the Bont and Oliver will be the top two, and if there is a three-way tie then add Steele to the list. If I had to choose an outright winner, I would still go with the Bont for just how good he was for the first 80% of the season, whilst Steele is my smokey to potentially come from behind to pip the leader in the last round. Wines and Petracca will poll strongly and round out the top five.