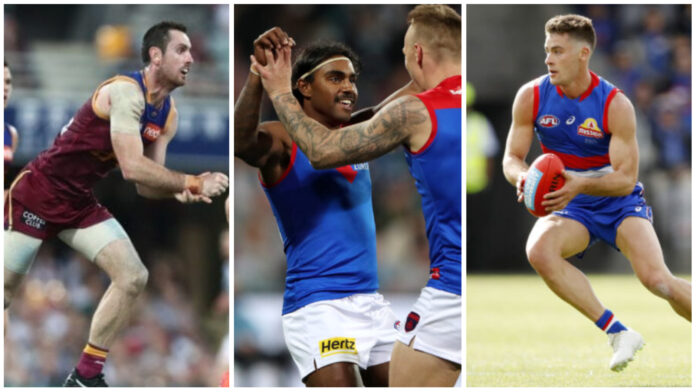 With the home and away season in its final month, trade news and speculation is beginning to ascend on the AFL landscape.

The past week has seen several stars of the game heavily linked to rival clubs in the open market, while contract calls for others still loom

The likes of Liam Baker and Angus Brayshaw put pen to paper this week on new deals, ending conjecture around their respective futures.

But with their names now off the market, rival clubs may be ramping up their interest in others who are yet to decide their tenures past 2022.

Here's our trade wrap for the last week...

Port, WA clubs understood to have sights on Kysaiah Pickett

Contracted Melbourne small forward Kysaiah Pickett is understood to be gaining interest from Port Adelaide, Fremantle and West Coast as the Demons brace for a surge of external advances on their premiership stars.

According to The Herald Sun, the three clubs are "coming hard" for Pickett ahead of the final year of the livewire forward's current contract.

Pickett last re-signed with the Demons in 2020, extending his stay in the red and blue at the end of his first season at the club after joining from SANFL side the Woodville-West Torrens.

The Demons are understood to be confident in prolonging Pickett's tenure beyond next year, but that extension is unlikely to come until midway through 2023.

READ MORE: Pickett on the radar of three clubs

The Western Bulldogs have reportedly tabled a three-year contract to former Carlton defender Liam Jones, an offer the retired defender is set to accept.

Jones has gained interest from several sides since the AFL's easing of their vaccine policy in recent weeks, which will now allow players who are unvaccinated to play and train in the competition.

Now, according to SEN's Sam Edmund, Jones has been offered a deal that would see him contracted until the end of 2025, a season he would conclude at the age of 34.

“Liam Jones has made his decision,” Edmund said on SEN.

“The 31-year-old defender, who stepped away from Carlton after refusing to adhere to the AFL’s COVID-19 vaccine mandate, has decided where he wants to play next year.

“Liam Jones wants to go back to where it all began at the Western Bulldogs."

The Blues are expecting the AFL to consider handing them compensation should Jones gain an exemption to join the league before the start of next season, with retired players unable to return for 18 months after deciding to hang up the boots.

Western Bulldogs veteran Jason Johannisen is reportedly assessing his options ahead of the off-season, with the 2016 Norm Smith Medal winner eligible to exercise his rights as a free agent in 2022.

According to 7 News' Mitch Cleary, Johannisen has “parked contract talks” in favour of “assessing the free agency market” this year.

Johannisen is yet to recommit to the Bulldogs beyond this year, having last re-signed with the club in 2017 on a five-year deal.

Johannisen has played seven matches this season after battling a calf injury throughout the opening half of the season, making his return to Luke Beveridge's side in Round 14.

Out-of-contract Demon Luke Jackson has put off contract talks with the club until the end of the season, according to Melbourne's head of footy Alan Richardson.

Speaking on AFL Nation, Richardson was asked if anything had changed regarding Jackson's contract status following the breakthrough signings of his star teammates.

“No it hasn’t,” Richardson said on AFL Nation.

“He’ll wait until the end of the year and then sit down with management and his family. Obviously those conversations have been happening all the way through.

“We’d love him to have already committed, that hasn’t happened. But we respect that he's a young bloke and he just wants to get his game and his footy out of the way.

“We all hope that it goes really late for him and he ends up signing and committing to us, but we’re unsure.”

Jackson has played 47 matches for the Demons across his three-years at the club, including 2021's drought-breaking premiership win.

Port Adelaide are understood to be among the rival AFL clubs showing interest in out-of-contract Bulldogs midfielder Josh Dunkley.

The 25-year-old last re-signed with the Bulldogs in 2019, signing a three-year deal amid a career-best campaign and pledging his future to the red, white and blue.

Dunkley remained at the Bulldogs and is now facing the expiry of his contract, prompting further interest from circling clubs.

One side that is believed to be showing strong interest in his services is Port Adelaide, according to AFL.com.au.

Dunkley has been previously linked to a move to South Australian clubs this year, under the thought that he and his partner, Adelaide Thunderbirds player Tippah Dwan, would find life easier in the same state.

Collingwood CEO Mark Anderson has swatted away rumours that million-dollar ruckman Brodie Grundy is set to exit the AIA Centre at the cessation of the season, despite remaining contracted until the end of 2027.

When speaking with Sportsday, the Magpies chief claimed that it wasn't his job to respond to baseless claims, especially when Grundy remained under contract.

“We understand there’s going to be a lot of speculation around and there is for a whole range of players," Anderson said.

“Brodie is coming back after 15 weeks, he’s going to play in the VFL this week on Saturday and being out 15 weeks, all of our focus is on him coming back.

"He’s got a contract and committed to that. Clearly, anything that is changed would be his decision.

“Now’s not the time for doing that.

“Brodie getting back and playing some great footy is our absolute focus.

“We’re a better team with Brodie in it, there is no doubt about that.”

Grundy is expected to earn within the vicinity of $5 million from the club across the course of the next five seasons.

Rival clubs are reportedly keeping tabs on contracted Suns duo Brayden Fiorini and Sam Flanders ahead of the off-season.

Despite their contractual status, sides are understood to have made inquiries about both Flanders and Fiorini, who hail from Victoria.

According to News Corp, the pair are seen as potential trade targets given their place in Dew's engine room pecking order, headlined by trio Touk Miller, Noah Anderson and Matt Rowell.

The Suns have shown a willingness to part ways with contracted players in the last 12 months, with Will Brodie sent to the Dockers in a pick-heavy trade, while utility Darcy Macpherson was floated for a move to North Melbourne in a potential salary dump in the same window.

Contract discussions between Gardiner and the Lions were reported to have begun long ago, but no deal has been reached as Gardiner approaches his 150th game, with the end of the home and away season looming.

"He’s a bit of a forgotten free agent, he’s one of only three restricted free agents that are left unsigned at this late stage of the year,” AFL reporter Callum Twomey told SEN.

"Rival clubs are watching that one with some interest given the lack of key position players on the free agency market.

"I still think the most likely result is that he stays at the Lions but he’s the best key back out there in the free agency group.

"Attention is on Darcy Gardiner there at the Lions."

Forgotten Demon on the outer

With all the big Melbourne names signing long-term deals to stay at the club, one player who seems gettable is Oskar Baker.

Baker's contract expires this year, and if he is to re-sign, he'll be the ninth player to do so, with Angus Brayshaw signing on for six years this week.

While there remain no obvious suitors in the market for the Aspley product's services, Jon Ralph of The Herald Sun has claimed that Baker fits within North Melbourne's age bracket.

With Ed Langdon starring on the wing and the rise of James Jordon, opportunities have proven scarce for Baker.

The 24-year-old hasn't featured at senior level this season, and has only played 15 games in his five years at Gosch's Paddock.

Essendon captain Dyson Heppell is reportedly unsatisfied with his contract extension offer, and is a "50-50" chance to remain at the club in 2023.

Heppell was presented a one-year extension by the Bombers, but remains underwhelmed by its duration, according to leading AFL journalist Damian Barrett.

"It’s a strange one. His form has been OK,” Barrett said on Triple M Melbourne.

"He’s stayed with Essendon throughout the entire problems they’ve had. And he’s been well imbursed to do so beyond the drugs saga.

"There’s an offer to him to play in 2023 as a Bomber. But it’s not from what I’ve been told to his near liking.

"What we have now established is other interest from other clubs.

"As we speak with four games to go of this season, there is a chance. I’d say it’s a 50-50 chance that he will be exploring options outside of Essendon, unless they improve the offer."

Heppell will be out of contract and is eligible to become an unrestricted free agent at the end of the season.

Adelaide senior coach Matthew Nicks has slammed a recent report suggesting he notified midfielder Matt Crouch his days at West Lakes were numbered, expressing he was "extremely disappointed" to hear the rumour.

Crouch, who has been on the outer of Nicks' side across multiple weeks this year, was reportedly told his current contract would not be extended.

When questioned on the rumour linking Crouch to a premature departure, Nicks stressed that the midfielder is a "required player" at the Crows, quickly looking to put the rumour to rest.

“Let me set the record straight and I won’t answer 100 questions around this,” Nicks told media on Friday.

“There was a news article on Tuesday night that was incorrect."

Fremantle forward Rory Lobb is reportedly expected to request a trade to a Victorian team at the conclusion of this season, despite being contracted at Cockburn through 2023.

The former Giant, who was picked 29th overall at the 2013 National Draft, has played 135 AFL games since debuting during the 2014 season.

Lobb has reached unprecedented heights this season, averaging a career-high 1.9 goals per game and having already achieved his highest goal tally in a season (30) in just 16 matches, topping his next best season total (29) from 24 games in 2016.

With numerous Victorian clubs said to be preparing to make a play for Lobb this off-season, we examine five potential landing spots for the 29-year-old.