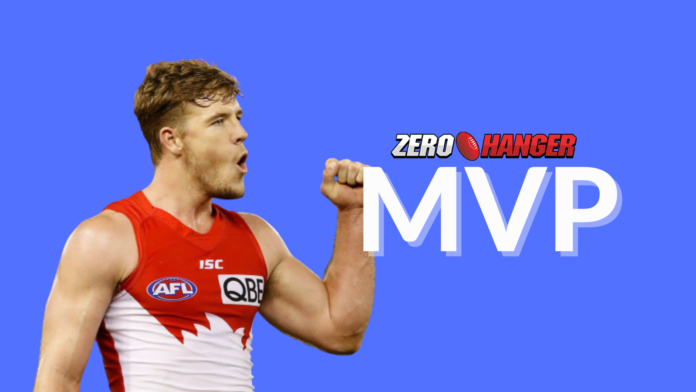 Round 18 saw another exciting round of football, with a number of upsets as well as statements made by the best.

With the 2021 AFL Premiership season starting to well and truly heat up en route to the finals, we take a look at our Zero Hanger MVP votes for Round 18.

A hard-hitting physical contest out west quickly soured for Fremantle as they failed to convert early.  Geelong where able to withstand and match the Dockers pressure before dismantling them with their uncontested possession game and methodical ball movement going inside 50.

Once the flood-gates opened the cats kept pouring on the goals as Fremantle struggled until the finish.

Sam Menegola starred for Geelong with 30 touches, 7 clearances and a goal with Patrick Dangerfield chipping in with a casual 20 plus possessions and 3 majors.

A desperate Tigers outfit started off red-hot by kicking away in the opening minutes, only for Brisbane to fight back and keep things close heading into quarter time.

The Lions were then able to give the Richmond a taste of their own medicine as they battled hard to take the lead going into the major break. Richmond then proceeded to do Richmond things as they slowly grabbed a strangle hold on the game, even when Dusty went down with a kidney injury, eventually kicking away in the final term to secure the needed win and keep their finals bid in sight.

Jack Riewoldt was spectacular in his 300th game as he booted 6 majors from 14 touches, not far behind him was Mabior Chol with four goals of his own and the Nank also got in the action as his 22 touches, 25 hit outs and 7 clearances highlighted his dominance.

A hot St Kilda side managed to outplay Port early as they took a 10 point lead into quarter time despite their kicking woes at goal. Conversely, Ports ability to hit the lead at the half was due to their ability to capitalise on their opportunities.

A trend that continued in the tightly contested bout and was ultimately the difference as the Power’s class shone through during the dying stages as they  claimed victory.

Ollie Wines had a monster game as he amassed 36 disposals, 11 clearances and a goal, while Karl Amon contributed with 26 touches, 10 tackles and 2 goals.

The Suns came prepared to fight in this clash as they stunned the Dogs to take a quick lead, this eventually dwindled as the favourites quickly adapted and closed the gap. Still determined, the young and hungry Suns managed to keep it close as the Dogs went into the half up by 10.

Yet the Dogs were able to maintain control of the contest and slowly but surely rise to the challenge and edge out Gold Coast by 11 points as they maintained their top two spot.

Jack Macrae was on fire as he collected his usual 30 plus touches and added to this with 8 clearances and 2 goals, while young gun Bailey Smith also shined with his 33 disposals, 9 clearances and 4 tackles.

What had all the signs of an early blowout was slowly made into a tightly contested game of footy as the Hawks were able to absorb and counterpunch some of the Demons best shots to go into the half down 11.

It was Hawthorn’s willingness to bang the ball inside 50 low, hard and ugly that unsettled arguably the games best back 6 as chaos balls derailed Melbourne all night. Finally, just as the D’s were on the cusp of victory it was the same old story that led to a Luke Breust goal inside a minute to tie it all up. From here both sides held on and that was all she wrote to complete one of the strangest results of the year.

Both sides midfield bulls came to play as Tom Mitchell answered his critics with 39 disposals, 6 clearances, 6 tackles and a goal, whereas Clayton Oliver tallied 35 touches, 9 clearances and 6 tackles.

A lacklustre Bombers started this one uninspired which allowed a brave North outfit to take the lead and hold it for a half of footy. Essendon eventually clawed their way back as their attack on the footy was too much for the young Roos, yet their inability to convert off of turnovers kept North in the game.

This was until Essendon’s constant pressure finally cracked North Melbourne in the final term as they were eventually able to capitalise by kicking 4 goals from intercepts to finish 18 point winners.

The Bomber’s dynamic duo had their fingerprints all over this one as Zach Merrett wrapped up his day with 39 disposals, 9 clearances and 3 tackles and Darcy Parrish added 8 clearances and 6 tackles to his 34 touches.

In unusual fashion, Collingwood started the game with quick and deliberate ball movement to compliment their solid defence, which allowed them to head into the first break up 11.

Yet Carlton showed signs of life as they continually managed to hang in the game by exploding late in both quarters to the half. This was the them of the day as the Pies tried desperately to put away their rival but ultimately ran out of legs as the Blues surged home in the final term to win by 29.

Young star Sam Walsh was all over the field as he racked up 39 touches, 5 clearances, 5 tackles and a snag, with Mathew Kennedy also impressing with his 26 disposals, 6 clearances, 7 tackles and a goal of his own.

Neither team looked like they could be bothered playing a game of footy during the opening quarter and despite the scoring increasing during the second, West Coast never really changed gears which kept a hungry Crows team in the hunt.

However, this wasn’t the case in the second half as the Eagles began to fire in their attacking efforts as goals began flowing consistently before being piled on in by the final term. Despite Adelaide’s best efforts the class difference between the sides stood out as West Coast left South Australia 42-point winners.

Jamie Cripps was having a day as he slotted 5 majors to go along with 25 touches, while Andrew Gaff contributed with 34 disposals and Liam Ryan chipped in with a handy 3 goals.

Sydney were outplayed and looked dead in the water before a late flurry of foals kept them in touch with the Giants going into the half. Both teams were missing crucial players due to Covid related chaos, with the Swans feeling the pinch early as they fielded three players who participated in a scratch-match the day prior to step in with little to no notice.

Sydney was then able to maintain their late momentum and carry it into the second half where they went on a scoring tear, kicking 6 unanswered goals in the third. This onslaught was too much for the Giants as they failed to rally late, eventually succumbing to a 26 point loss.

Luke Parker was spectacular as he took home his third Brett Kirk Medal after finishing with 31 disposals, 9 clearances, 6 tackles and a goal, while fellow veteran Josh Kennedy finished with 30 touches, 10 clearances and 4 tackles