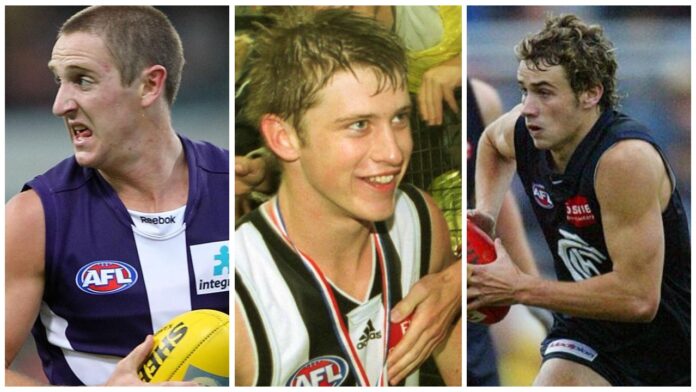 Over the years, we have had stand out debuts but have also seen some very poor first games.

Some of the all-time greats have had horrid debuts, such as the likes of Jonathon Brown, Nick Riewoldt and Sam Mitchell.

While others have had impressive to unbelievable debuts, like Riley Thilthorpe's 16 disposals and five goals in round 6 this year.

Some honourable mentions from prior to 2000 include:

39 disposals, most ever on debut.

Six goals, including four from his first four kicks.

Adrian McAdam (North Melbourne, 1993) Seven goals and two behinds from 10 kicks on debut, left Wayne Carey to play second fiddle. Interesting to note, he followed this with 10 goals and six behinds the following week and seven goals the week after.

Eight goals from 10 kicks. Only three players have ever kicked more on debut.

It has become football folklore, the beginning of Chris Judd's AFL career.

The No.3 pick in the 2001 Draft was overlooked by coach John Worsfold for round one, and Judd responded by absolutely torching West Perth in the WAFL, with 15 disposals and four goals.

Worsfold learned from his mistake, and the Sandringham Dragon never played in the WAFL again.

As for his AFL debut, it too was pretty handy.

At the home of football, the MCG, against a powerhouse club in Collingwood, the midfielder's dash caught the eye of the football world. And they never took their eye off him again.

He finished with 19 disposals, 12 contested possessions, six inside 50s, five clearances and a goal.

Everyone knows how the career of the 2021 Hall of Famer would pan out at both the Eagles and Carlton.

Mark McGough will always be remembered for winning the 2002 Anzac Medal in just his second game, and for good reason.

He was just 17 at the time and still in high school when the chunky youngster made his name on one of the biggest stages in AFL.

It was only five days prior that he made his debut, another standout game.

In a 41-point win against the Hawks, McGough recorded 22 disposals, six clearances and two goals from four scoring shots.

He earned himself two Brownlow votes for his brilliant debut.

That tells the tale of the boy from Mulwala, as the rest of his career didn't really pan out like his first games suggested it would.

After three seasons he was delisted by the Pies and spent two years at the Saints, only managing 12 games before being delisted once more.

His career was over at 22-years-old and 49 games, but he and everyone else will never forget Anzac Day 2002 and an impressive debut the week before.

Essendon weigh in on AFLW venue change for Round 1 blockbuster