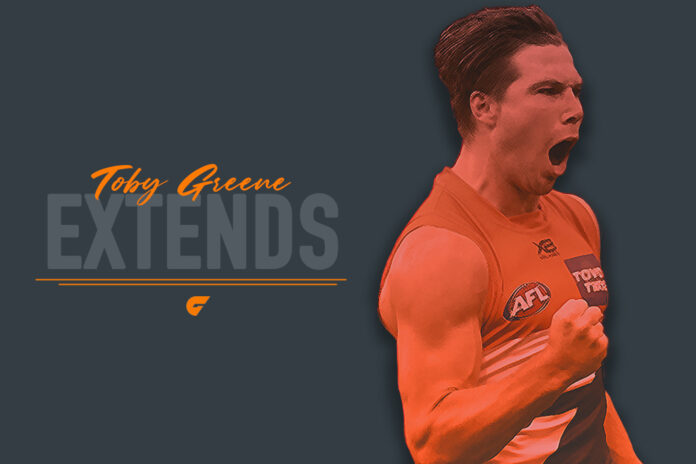 Good news GWS fans - star forward Toby Greene has penned a two-year extension with the club until the end of 2026.

Originally signed until 2024, the stand-in skipper has added two years to his six-year deal penned in 2018, effectively making him a Giant for life.

The 27-year old was thrilled to commit the rest of his career Western Sydney.

“I’ve always known my future was at the Giants, it’s been my home since I was 18,” he told gwsgiants.com.

“We’ve got a young and exciting group this season and I’m privileged to lead them out until Cogs (Stephen Coniglio) returns.

“It’s been a really enjoyable start to the season and I’m looking forward to being back in Sydney in front of our orange army this weekend.

Greene has enjoyed one of the best seasons of his career in 2021, averaging 18.6 disposals and booting 19 goals from seven games, and has especially stood up since taking over the captaincy reigns from injured incumbent Stephen Coniglio.

The exciting forward has now played 165 AFL games for GWS since joining the club with Pick 11 in their inaugural draft.

Giants General Manager of of football Jason McCartney said tying Greene to the club for life was always in their vision.

“Toby’s obviously a star of the competition and is having a brilliant start to the season,” McCartney said.

“He’s flourished with the added responsibility this season which is really pleasing.

“It was a pretty easy option for us to add another couple of years to his contract, we’ve always known he’ll be a Giant for life.”