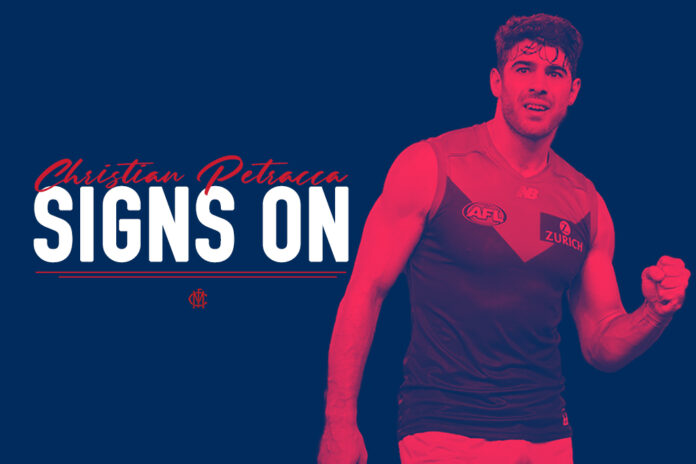 Melbourne superstar Christian Petracca has signed a monster contract extension with the club until the end of the 2029 season, as first reported by Seven News.

Set to be one of the biggest names to hit free agency at the end of 2022, the gun midfielder has instead recommitted to the Demons on a record seven-year deal.

Seven News reported that Petracca’s management put the landmark contract to Melbourne worth $900,000 per season.

“Christian will now be a Melbourne player for life and our members and supporters can look forward to cheering him on through what we are sure will be the best years of his career,” Demons list boss Tim Lamb told melbournefc.com.au.

“Over the past couple of seasons, Christian has established himself as one of the competition’s elite players and we are confident his best is still to come.

“To turn his back on free agency, and what would have undoubtedly been significant offers from other clubs, is a testament to his character and shows how much he loves this club, his teammates, coaches and the environment we have worked so hard to create.

“It is an exciting time to be a part of the club and Christian has been unwavering in his commitment to being part of the journey we are on.

“He is focused on helping lead us to where we want to get to, and we can’t wait to see what he can produce in the red and blue for many more years to come.”

Collingwood had been linked to Petracca and were expected to target the star onballer in 2022 free agency, who the 25-year old grew up barracking for.

But the contract extension has officially ended the Magpies’ and other rival clubs’ pursuits in a major coup for the Demons.

The former Pick 2 enjoyed a breakout 2020 season, averaging a then career-high 23.5 disposals from 17 games, booting 15 goals, finishing equal-third in the Brownlow Medal and winning Melbourne’s best and fairest.

The current equal Brownlow favourite has continued his superb form in 2021, going at 29 disposals per game and booting seven goals.

It caps off a massive retention spree for the top-of-the-ladder Demons, who are undefeated with a 7-0 record, locking away Jack Viney, Max Gawn, Kysaiah Pickett and Luke Jackson in recent times.

Christian Petracca is on the verge of a monster deal to remain at Melbourne. @TomBrowne7 with exclusive details. https://t.co/5zYfOfohG3 #7AFL #7NEWS pic.twitter.com/QOTxpZ6Ebs