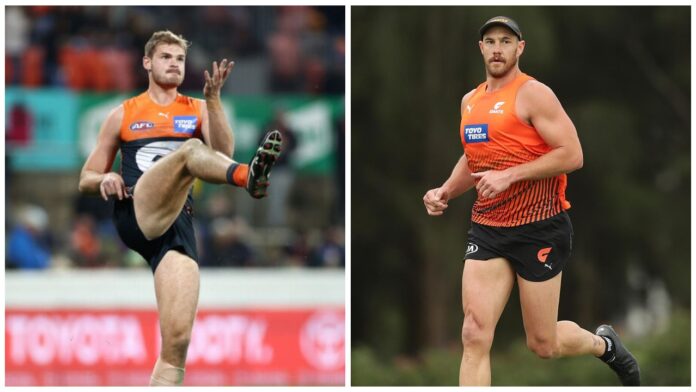 The Giants are yet to make a call on which ruckman will come up against Adelaide gun Reilly O'Brien this weekend.

But don't expect to see Shane Mumford and Matthew Flynn rucking together for GWS anytime soon.

Mumford, who turns 35 later this year and was retained on the rookie list as both a ruck coach and player, is largely serving to nurture his younger teammate this season.

The pair spoke exclusively to Zero Hanger about the plan of attack for Saturday's matchup against O'Brien and the ruck schemes moving forward.

"To be fair we're not really sure what's happening this weekend yet," Mumford said.

"He's (O'Brien) a fair athlete and comes close to winning their time trials and things like that. You've got to be able to try and stop his run around the ground, he's pretty bloody strong in the ruck.

"He's got a fair few attributes that we're going to have to try and nullify, whether it be me or Matt, whoever comes up against him. Or whether it is both of us. Who knows, Leon might throw a curveball and play the two of us."

Flynn, 23, made his long-awaited AFL debut for GWS in Round 1 this year after five years on the list.

He said it would be a horses for courses approach in the ruck each week.

"At the end of the day it comes down to team balance and how he (Mumford) pulls up after each game, and who we come up against. A lot of teams do opt to go for the two rucks these days. It's not something we've traditionally done but I'm sure Leon would be open for it if it came to it."

Mumford joked: "I think one of us is just going to have to kick half a dozen goals in the twos to try and make it happen," before adding "I think it's more unlikely that we'll see two ruckman in our team."

Mumford wound back the clock in GWS' first win of the season against Collingwood in Round 4 in a game where Flynn was rested.

The veteran held his spot the following week before Flynn was reprieved to face the Dogs last weekend.

While Flynn has put in some strong performances in the role - averaging 13.2 disposals, 4.8 marks and 24.5 hitouts from his four matches - the Giants are 2-0 when Mumford has played.

Asked if his inclusion against Collingwood was a tactical move to bash and crash with star ruckman Brodie Grundy, Mumford responded: "I think there was always a bit of a thought in Leon's head to bring me in against Brodie.

"I wouldn't say I've had success against him but I've been able to try and nullify his impact the last couple of times we've played them.

"I think it was always in the back of Leon's mind and Matt had had a few big weeks. I don't know if he wanted the rest, but it's going to be beneficial for him to play a few games on then maybe one off here and there.

"Hopefully by the end of the year we'll have the big boy up and flying and I'll be kicked to the curb and you won't see me again."

Flynn and Mumford aren't the only two rucks on the list vying for a spot in the senior team, with Kieren Briggs currently plying his trade in the VFL, while Braydon Preuss - who was touted as the No. 1 ruck pre-season - is on the road back from shoulder surgery.

Mumford said the untried Briggs is in the selection frame and constantly getting in Leon Cameron's ear about finding a spot for him.

"He's putting his hand up, it's quite good we're all battling it out at the moment for the spot in the team," Mumford said.

"Briggsy has certainly been putting his case forward. He's banging Leon's door down just about every day I think trying to get himself in."

Meanwhile, Preuss is back running and on the mend, expected to return to the field in around five weeks.

But a shoulder injury in the pre-season that required a full reconstruction meant he would have to wait some more to get his chance to announce himself as a first-choice gun ruckman.

"Running really well and I'm sure he'll be a great asset when he's around. He's a big boy so it'll be great to have him out there."

The Giants have looked reinvigorated under stand-in skipper Toby Greene after Stephen Coniglio went down with an ankle in Round 3.

It has raised questions about Coniglio's leadership moving forward and led to calls for the club to permanently hand the captaincy to Greene.

Flynn said they are both great leaders in their own right and highly valued within the four walls of the club.

"As individuals they are just different people as it is. Cogs is a little bit more a natural leader and Toby is a bit more reserved.

"Toby's leadership style is more on field, he plays with heart on the line kind of stuff and Cogs is great at getting the boys up and about, getting around them and supporting, loving and caring for everyone.

"Toby's natural leadership is that on field stuff and everyone sees that externally, but internally we see what Cogs brings which is his love and care for everyone.

"Both of them are absolutely unreal leaders and we love them both endlessly."

And Mumford has been around the traps long enough to know you can never have too many good leaders at a footy club.

"In the end the more guys you've got like that around the club, the more beneficial it is going to be for the whole group."

Four guys competing for one spot doesn’t fit. But what they do have is three bright emerging prospects and maybe the perfect tutor coaching them. Safe to say they are in good hands.

The Giants will be searching for their third win this season when they make the trip to Adelaide Oval to face the Crows on Saturday at 2.10pm AEST.