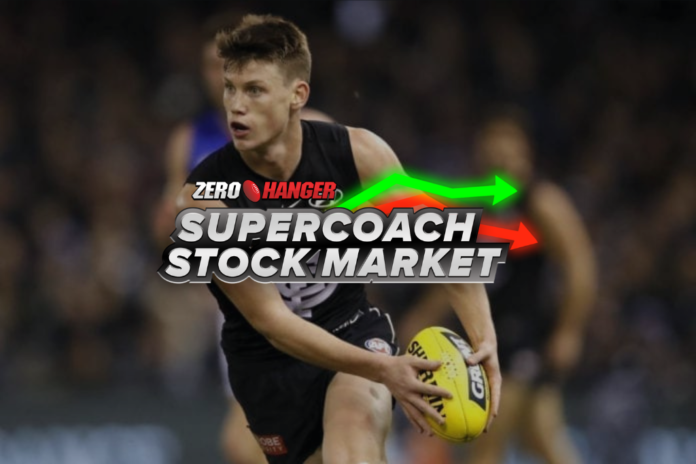 If you haven't already jumped on the Blues gun, now is your time.

With a breakeven set at 68 heading into Round 7, this week is going to be your best chance to add Walsh to your side before a further string of price rises.

Currently sitting 7th for overall points and third between non-DDP midfielders, Walsh is a must have.

His 167 on the weekend was more than enough to back up his 108 against Hawthorn the week prior.

Those two scores have aided the Demons defender to a breakeven of just 25 for this week, with his overall price set to soar should he remain in form.

For those turned off by call to trade in Salem, just know he currently averages the same as Swans defender Jake Lloyd and is placed $70k cheaper.

If you're on the hunt for a premium midfielder (which most coaches are given the injury crisis) and you are one of the 26,392 coaches to have the aforementioned Sam Walsh, Boak should be the next on your hitlist.

The Port veteran continues to age like a fine wine with a 2021 average of 115.8 from his six matches.

With casualties left, right and centre impacting premium players, a one-week sit for the Tigers superstar might not be your biggest worry.

Forwards in particular have been hindered by some untimely injuries, and Dusty frames as one of the must haves across the next few months of the season.

Still within the top six forwards so far this season, there is little reason to move on the three-time Norm Smith medallist when upgrades, cash cows or forced trades are on the cards.

The Tigers defender hasn't been at his best across the past fortnight, with scores of 74 and 61 taking $30k off Short's asking price.

A breakeven of 160 should be no reason to move him on, with his best well and truly amongst the top six.

He'll be back up there in no time.

Currently the seventh most traded out player this week, and there is very little reason to suggest why this should be the case.

Rowe firms as a 75% chance to overcome his BE of 31 and should only add further cash to your bank this weekend as the Crows face GWS.

With plenty of other forward rookies facing tighter quotas in Round 7, you're best to look elsewhere in your moves for this week.

Two months out of the league forces your hand to move on the Lions star, and you're not short on options given his price.

$3k can land you Walsh. Should you dive a little bit deeper into your purse Cameron Guthrie, Clayton Oliver, Marcus Bontempelli and Jarryd Lyons all stand as suitable targets.

While in a similar position with Neale, we'll take a more forward focus when moving Dunkley on.

With the Dogs gun the highest-priced forward you're set to make some decent money no matter where you look.

Jack Ziebell is a must have should you still be without, while Toby Greene, Taylor Walker, Jarmen Impey and Dayne Zorko are also running along nicely.

The young Swans duo are tipped to fall under their Round 7 breakevens, with Gulden and Campbell battling to reach 78 and 65 respectively.

Should you have the room to move one or both on, Jy Farrar, Atu Bosenavulagi, Beau McCreery and Finlay Macrae stand formidable downgrade options.

Jacob Koschitzke (104 points) was the pick of the bunch for the rookies in Round 6, with his breakeven plummeting to -48.

Deven Robertson (97), Connor Menadue (92) and James Jordon (82) were more than serviceable, while debutant duo Riley Thilthorpe (91) and Martin Frederick (88) were also impressive and will be strong bubble boys for next week.

The aforementioned Gulden and Campbell are sure to be in some danger to face price drops, while Heath Chapman is also fighting a tight BE with 68 for Round 7.

Finlay Macrae, Atu Bosenavulagi, Jy Farrar, Sam Flanders and Connor Menadue are all on the bubble this week.

Injuries to Neale and Dunkley will be placed as priority trades ahead of rookie moves or the likes of Jordan Clark unfortunately.

'Mr. Consistent' Jack Steele looks to be a top six selection and will be brought in this week, with Toby Greene an inclusion into my forward line. 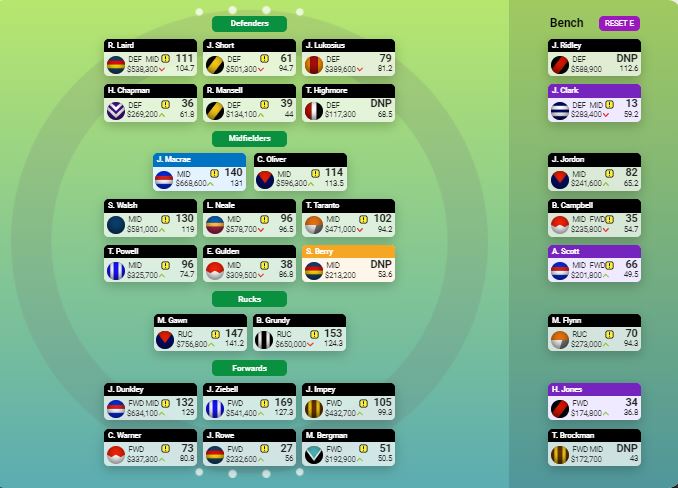