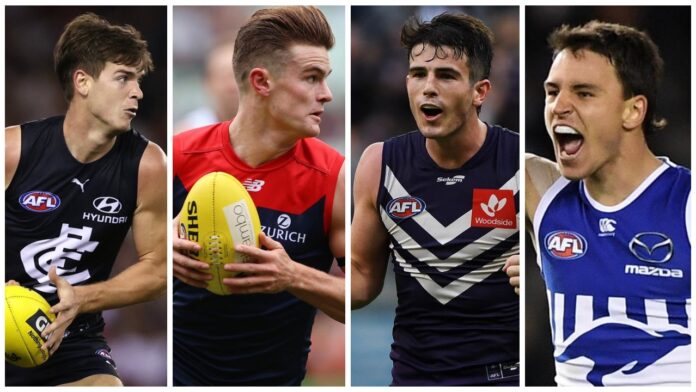 The draft class of 2017 has been a contentious issue over the years with a widely-held belief it hasn't lived up to the expected standards.

Pressure has mounted on certain players from that draft since they entered the system, but 2021 has seen this draft class go boom!

Some of the names have hit their straps in 2021 and are now taking the competition by storm. This weekend past, pick 3 Paddy Dow took on picks 2 and 5 in Andy Brayshaw and Adam Cerra in a terrific clash.

Dow has been one of the big boomers this season with Blues fans longing for the arrival of the speedy midfielder. As recently as earlier this year Dow had been criticised for his lack of development but his last three weeks have been superb.

Dow put in a career best game on Saturday night but was still outshone by Brayshaw. Brayshaw has become arguably Fremantle's best midfielder this season and has become a genuine star.

He has been excellently supported by Adam Cerra who is now demanding serious attention from Melbourne clubs as he contemplates a move back home. Cerra is in hot demand and could warrant offers over $600,000 per season.

Another prospect the AFL world has been waiting for is Luke Davies-Uniacke. The North Melbourne midfielder has generated a lot of excitement for North fans and has shown glimpses of what he can do.

In 2021 he has become a much more consistent threat to oppositions and is starting to become a key cog in the North Melbourne midfield.

There is arguably no bigger star in this class than Aaron Naughton who has had a massive 2021. While Naughton had made his stamp on the competition long before this season, he has again taken it to another level.

The leaping forward has booted 33 goals this season is averaging nearly two more marks per game than his best ever season in the air in 2019.

Another forward who has taken the step this year is Demon Bayley Frtisch. Despite Melbourne having Ben Brown, Sam Weideman and Tom McDonald on the list Fritsch has locked his spot as the Demon's most dangerous goal-kicker.

The smooth left-footer has 31 goals to his name at this point and has kept Brown and Weideman out of the side for most of the year.

This draft class maybe doesn't resemble the 2001 super draft and it maybe doesn't have the star power or immediate impact the 2018 draft possessed. But it is coming of age before our eyes and we are starting to see some good players emerge.

Maybe the crtiticism of 18-20 year-olds was maybe a bit premature. Not every player can hit the ground running like Sam Walsh and for those who have to work on their craft over time the constant debate over their future is all maybe a bit hasty.