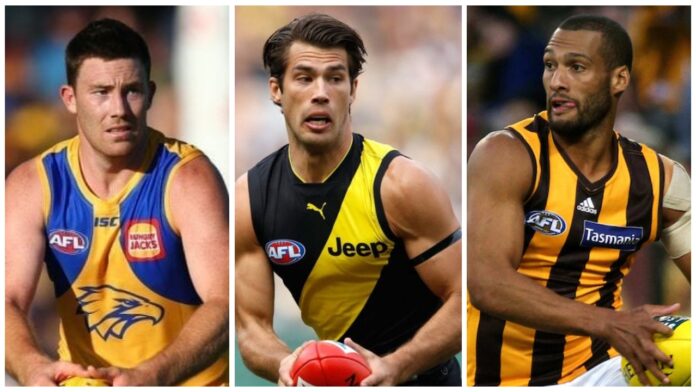 Although their numbers are unlikely to adorn many jumpers at Auskick centres around the country and their player badges remain fully stocked at the club shop, ask any defender, and they will tell you that they provide the most integral service on game day.

Following on from our best players of the century series, we felt that it was the perfect time to count down the top 10 players in every position since 2010.

Akin to selection night, we will be starting this series of lists with these often under-appreciated men at the back.

Despite the fact that some superb footballers plied their trade since 2010, to earn a place within this catalogue, they must have played at least 100 senior games since the start of 2010.

Therefore, even though there is an argument that Matthew Scarlett is the greatest contemporary defender since Stephen Silvagni, sadly for Cats fans, ‘Scarlo’ is ineligible for selection.

Furthermore, unlike our best players of the century series, we've focused on purists in each position. This would rule out someone like Luke Hodge in defence given he played a large portion of his career in the guts.

Without further ado, here are the 10 names that have led that way forward down back over the last decade.

Kicking off our list is a man that provided faultless service for his team across 18 seasons, but sadly missed out when they finally tasted glory – Robert ‘Bob’ Murphy.

Although Murphy debuted for the Dogs in Round 19, 2000, the former skipper truly hit his straps at the commencement of the last decade.

Between 2010 and 2015, the former first round draft pick collected a pair of All-Australian blazers, an AFLPA Captain of the Year award and an average of more than 20 disposals per game.

Despite an ACL injury sidelining him for the vast majority of the Pups’ 2016 premiership season, the Gippsland Power product entered the year as the reigning All-Australian skipper.

As both a fan and folk favourite, the memory of the emotional defender receiving Luke Beveridge’s Jock McHale Medal prior to raising some drought breaking piece of silverware will live long in the memory of football supporters forever.

As quick witted as he was by foot, Heath Shaw’s ability to generate offence from defence was unparalleled for many years.

Although the son of a gun never claimed best and fairest honours at either Collingwood or GWS across his 17 year career, the imperious half-back flanker did finish with a premiership medal and a pair of All-Australian blazers.

From 2010 until the end of last season, ‘Heater’ collected a mean of 20.8 disposals and 5.6 rebound 50s per week, and was also the architect of the game's most recollected smother.

Both quirky and classy, Harry Taylor provided his pair of coaches with unwavering quality for the majority of his career as a Cat.

After being taken with pick 17 of the 2007 Draft, Taylor quickly formed a formidable tandem with Matthew Scarlett, before assuming the master’s role after his backline buddy retired in 2012.

With a pair of AA honours and premiership medallions, the Western Australian stopper earned his dues across his 13 years at Kardinia Park and proved more than adept at blanketing the all of the league’s fleet of key forwards.

Despite being seen as one of the best contemporary defenders in the game, Dylan Grimes’ early years at Tigerland bore little fruit.

Although the Northern Knights product made his debut in the final round of the 2010 season, it would take him a further four years before cementing his place in Damian Hardwick’s 22.

Still, like a cellared sangiovese, Grimes has only gotten better with age.

Having played the entirety of his career within the bounds of this list’s criteria, the 29-year-old was an obvious choice for our catalogue, due to his three premiership medallions, his All-Australian blazer in 2019 and his ability to lead such a successful back six.

Ask a collective of football fans who they believe the best key defender in the current game is and you are likely to hear the 24-year-old’s name more often than not.

Despite being tossed in the deep end down back to begin his career, Andrews has forged forward and carved out the beginnings of a brilliant career.

Although only surpassing the 100-game mark last season, the Aspley Hornets product has already obtained a pair of All-Australian honours and a key role in the Lions’ leadership group.

If you are yet to buy stocks in the young stopper, hit the trading floor now.

That mark. That bend and snap. Harris Andrews, you're a star. 🌟 #AFLLionsDons pic.twitter.com/CrgELmwpFN

Understated, underrated, and also perennially underestimated by teams heading inside forward 50, Shannon Hurn’s ability to leap, grab and repel with his trusty right boot has broken the hearts of many opponents over the years.

Relive his first on debut from 2006. pic.twitter.com/0mh1zmGk6t

The West Coast skipper has been as solid as reinforced cement since 2007, and has obtained a premiership medallion, pair of All-Australian blazers and the 2019 AFLPA Captain of the Year award with the most minimum of fuss.

RELATED: The AFL’s best and worst kicks in 2021

With a hairline like the current economy, the boy from the Barossa appears as though he has been around since the Eagles’ inception, but with fuel left in the tank and his contested marking ability still above average, the powerhouse club from Perth may offer their former skipper another contract extension yet.

Although maligned across the early stages of his career, Josh Gibson had both a follicle and footballing makeover of Backyard Blitz proportions after trading Arden Street for Waverley Park.

In his time with Hawthorn, the former Oakleigh Charger collected three premiership medals, two B&Fs – both in flag winning years – and All-Australian honours in 2015.

With his sublime spoiling prowess and his average of 7.5 one-percenters per week across his 12-year career, it was little wonder why the rookie draftee won the game’s only defensive honour in 2013 – Spud Frawley’s Golden Fist.

Throughout Geelong’s contemporary era of dominance, names like Ablett, Selwood and Bartel were quite rightfully lauded, yet quiet achievers like Corey, Wojcinski and Rooke often went without sufficient praise.

Another name in the second category that well and truly deserved a place within the first was perpetually All-Australian, Corey Enright.

SEE ALSO: Ranking the six most promising young lists in the AFL

Although the crafty Cat earned six blazers across his 332 games, ‘only’ four were awarded from 2010 onwards.

Like Gibson, the South Australian flyer won three flags and a pair of best and fairests in premiership years – 2009 and 2011.

So, although his external plaudits may be muted in comparison to some of his teammates, the view within the four walls of Kardinia Park definitely didn’t match.

Since debuting as a podgy 22-year-old in 2014, Jeremy McGovern has developed into the current game’s best proponent of the intercept mark.

"He just controlled this game." 💪

With sticky hands and a hard nose, the Western Australian stopper has averaged more than six marks, five one-percenters and 14 disposals per week across his 144-game career.

The 29-year-old has been so integral to the Eagles’ ability to perennially make September action, that it surprised nobody when he was awarded All-Australian honours in four of the last five seasons.

With five All-Australian blazers, a B&F, as well as a premiership medal in 2017, even if his cocksure personality may grate you, there is no denying Alex Rance’s status as the past decade’s premier defender.

Across his 11 seasons at Tigerland, the former first round draft pick averaged more than 16 disposals, five marks and seven one-percenters per game, proving the Western Australian backman was adept at both winning the football and raining on his opponent's parade.

Although injuries curtailed his career, it would take a bolt from the blue to dethrone the terrific Tiger as the best defender since 2010.