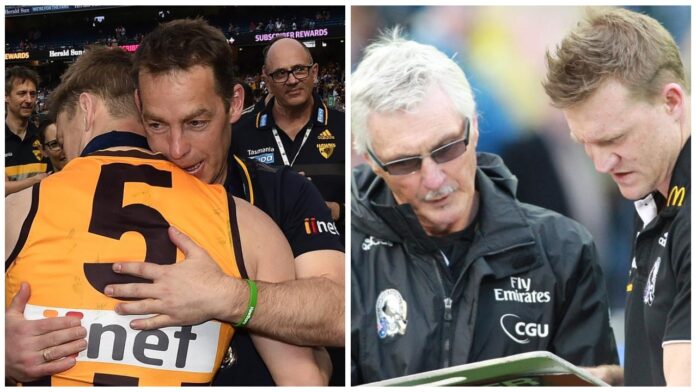 Hawthorn confirmed on Tuesday of a coaching succession plan that will see Sam Mitchell take over from legendary mentor Alastair Clarkson from the 2023 season.

A number of inspired outings over the past few weeks have cast a light on the bright future of Hawthorn's list and their youngsters, while simultaneously adding a further degree of intrigue into their decision to hand the senior coaching reigns to their club great.

Looking at the Hawks' list, there is promise, with time now on Mitchell's side to work with Clarkson to build a steady list come the conclusion of the 2022 season.

The Hawks' young and dynamic backline has stood tall in recent weeks with the likes of Will Day, Jack Scrimshaw, Denver Grainger-Barras and Changkuoth Jiath all playing their part, with disruptive defensive play from Sam Frost and Blake Hardwick allowing for attacking plays to manifest for their half-backs.

On the attack, forward duo Tim O’Brien and Dylan Moore have played an inspired brand of footy that see them dominate in the air and between the big sticks, with other youngsters Jai Newcombe, Lachlan Bramble and Jacob Koschitzke displaying ferocity and finesse in their attacking pursuits.

With the Hawks going strong since the bye, coupled with their youngsters looking the goods, the hopefuls returns of injured star duo James Sicily and Jarman Impey will only provide additional experience to the already developing group for the remainder of the year.

The combination of promising outlets begs the question of whether the incoming succession plan will benefit the club moving forward.

In order to assess this, lets have a look at how other examples of the coaching handover have worked out.

As you can see the coaching succession plan pathway carries no guarantee for greatness, meaning Hawthorn has a lot to weigh up over the off-season.

One way of viewing the situation is that Clarkson has taken the club to the promised land four times, meaning he’s as likely as anyone to continue leading the club to success in the future given he’s a proven commodity.

Conversely, Mitchell matches the Longmire build which has been the most successful of the succession plans, as he’s already been an assistant at the club for several years and even played under Clarkson. This gives Mitchell an in-depth knowledge of the club's workings and culture as to not disrupt these and instead continue to build on them, which itself carries the potential for great future success.

It’s ultimately up to the club whether the Hawks allow their legendary coach to stick around and work his magic, or move on with his star assistant and co and hope they can continue to emulate the latter’s success.

With the club currently sitting at 17th, the rapid development of their youngsters is sure to aid the transition from master to apprentice.