North Melbourne has pulled off the shock move of the off-season by poaching delisted Sun Hugh Greenwood from underneath Gold Coast's nose.

Greenwood, 29, had been delisted by the Carrara club last week, however, Gold Coast General Manager of Player Talent and Strategy Craig Cameron explained that their plan was to re-draft the Tasmanian at this month's draft. 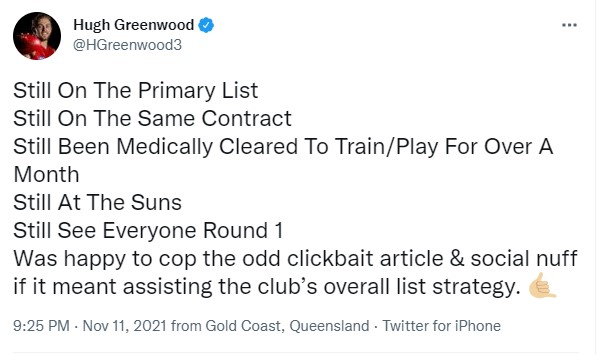 According to Riley Beveridge of AFL Media, Greenwood has inked a two-year deal with the Kangaroos as a delisted free-agent despite still having a pair of seasons still to run on his contract with the expansion franchise.

While the timeline of this shock deal remains bewildering, SEN's expressed via Twitter that the deal was agreed upon within the past 48-hours.

Incredible. Why did the Suns choose to temporarily delist a best 22 regular?

Greenwood produced means of 17.5 disposals, 6.2 clearances and 8.6 tackles across his 15-appearances in 2021 and was still seen as a required player on the paradise strip ahead of the 2022 season.

While a knee injury brought an early end to his second campaign as a Sun, Greenwood is reportedly set to be fully fit by the time the Roos reconvene for pre-season training on December 6.

Should Greenwood remain fit across his first season with his third AFL club, the skilled basketballer will play his 100th game in the back half of next year.