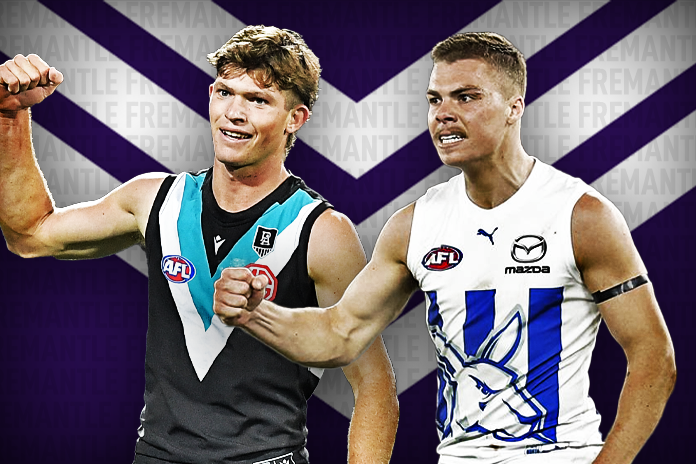 The Dockers have emerged as the most surprising premiership contender of 2022, with Justin Longmuir now getting the best of out of his balance of emerging stars and seasoned heads.

But while Fremantle continue to rise up the ranks after years of rebuilding, some pieces of the purple puzzle are yet to click, with their final solution perhaps relying on players currently plying their trade at rival clubs.

With the Dockers already in the middle of trade and free agency reports and rumours this year, they loom as a major player in the upcoming off-season for both gains and losses.

Looking at the former, we cast our eye over five players Fremantle could consider targeting in 2022.

The Roos' livewire forward is yet to recommit to North Melbourne, with reports suggesting the 24-year-old has held off on contract discussions at Arden Street in favour of assessing his options for next year.

Zurhaar, who hails from East Fremantle, would see a move to the Dockers as a return to his home state and a chance to immediately hold a place at a premiership contending club.

The bullish goalsneak is a proven threat in attack, having booted 98 goals from his 78 career matches in the blue and white, and would complement an already lethal speartip at Cockburn.

With Matt Tarberber to lead the charge, Jye Amiss waiting in the wings, and a trio of small forwards in Lachie Schultz, Sam Switkowski and Michael Walters at their feet, Zurhaar could slot into a Dockers attack with little hassle.

What would the Dockers be required to move for Zurhaar's services? It's unlikely a player-for-player trade would arise, with Fremantle's current Pick 16 - their only selection in the opening three rounds - a likely piece in any transaction.