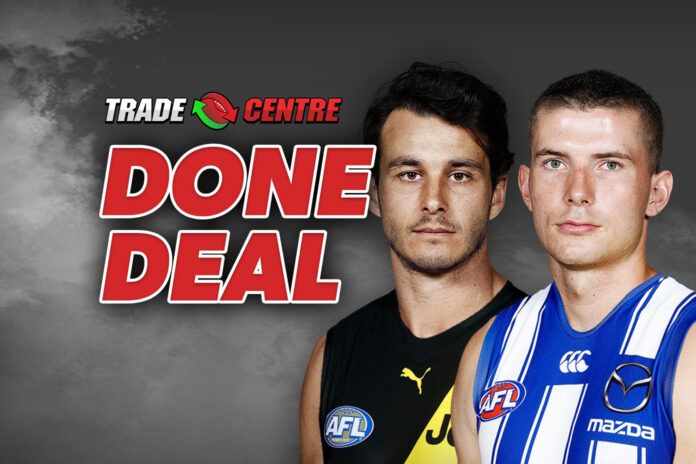 Richmond and North Melbourne have lodged paperwork for a trade that will see Callum Coleman-Jones and Robbie Tarrant swap places, while several picks also exchange hands.

The Kangaroos will receive Coleman-Jones and Picks 42, 47 and the Tigers' future fourth-round selection.

Coleman-Jones requested a trade to Arden Street this year after an impressive season with the Tigers in 2021, booting 11 goals from his eight appearances.

The 22-year-old will bolster the Kangaroos' list rebuild and tall stocks, being able to play as both a key forward and ruckman.

Tarrant had lodged plans for a move to Richmond after exercising his free agency rights in the off-season, ending a 174-game career with the Shinboners.

The veteran backman is sure to aid the Tigers' defensive structure next season in filling the voids left by the retired David Astbury and Bachar Houli.

The two clubs opened trade talks that would include Tarrant as the Tigers look to hold the compensation draft selection they received for the recently departed Mabior Chol, who joined the Suns last week.