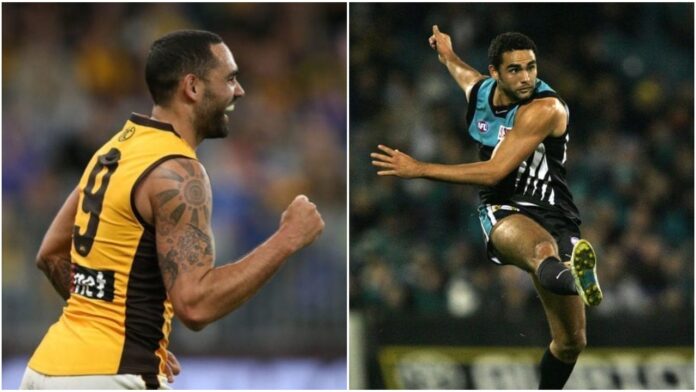 Port Adelaide and Hawthorn great Shaun Burgoyne will reunite with the Power in the first role to follow his playing career.

The Power confirmed on Wednesday that the 38-year-old will return to South Australia to join Port Adelaide's football department in a position that will span across several roles, including leading a role that will focus on programs for the Indigenous community.

A number of clubs - as well as the AFL - were keen to swoop on the recently retired 407-game great, with Burgoyne accepting a position at Alberton for next season.

The role will see Burgoyne impact the club's list management, corporate relations and mentoring, while being appointed as an Indigenous liaison officer.

“As a family we are all thrilled to be returning home to Adelaide. Amy and I are both originally from Adelaide so we have plenty of family and friends that will provide great support to us,” Burgoyne said via the club's announcement.

“I grew up at Port Adelaide, progressed from Mallee Park in Port Lincoln through the juniors with the Magpies at SANFL level and was fortunate enough to win an AFL Premiership for Port Adelaide, so this club means a lot to me, and also to my family.

“The club is in a great position both on and off the field. It is stable, has great leadership and has a playing list that will ensure sustained success for many years to come. It is clear that the club is totally united and I can’t wait to be part of it.”

Burgoyne played 157 games for Port Adelaide and was a key member of their maiden AFL premiership winning side in 2004.

Speaking earlier this week on SEN, Port Adelaide football boss Chris Davies acknowledged the club's interest in luring Burgoyne back to the Power.

“Our club has had an interest in Shaun Burgoyne for a long time,” he said.

“If Shaun was to make the decision to come back to Adelaide, of course we’d be interested in what he could bring to our club.

“There’s not too many times you get an opportunity to garner the wisdom of a 400-game player to impart on your department or your playing group."

The Darwin product made his AFL debut with the Power in 2002, and would played in eight seasons at Port Adelaide until moving to Hawthorn ahead of the 2010 season.

Burgoyne's role will begin from November 1.