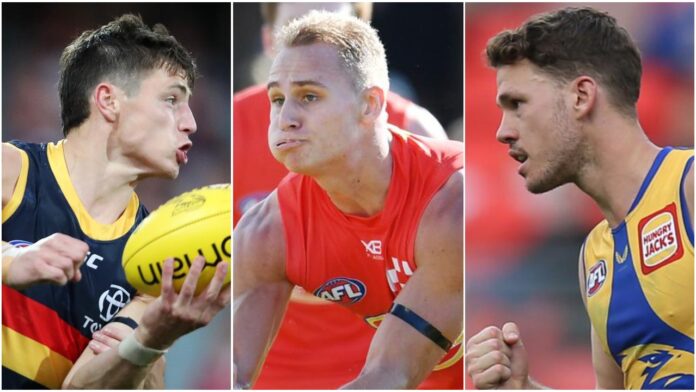 It was another frantic week in the AFL trade circles, with more clubs officially entering their off-season and are beginning to re-shape their lists for 2022.

The Lions, Crows, Bombers and Swans were among the mix of clubs in the headlines over the past week in what has been a busy period of trade and free agency news and rumours.

It was a chaotic week for Lachie Neale, Brisbane and the Dockers, with the superstar midfielder being linked to a return to Fremantle, however the Brownlow medallist was eventually able to clear the air.

Neale said that while he and his wife had discussed the possibility of returning to Perth, but the discussions were very preliminary in their nature.

The departing quintet join the likes of Shaun Burgoyne, Jonathon Patton and Tom Scully to depart the Hawks this year.

Gold Coast forward Malcolm Rosas is on the verge of a new contract extension to remain in Queensland, effectively knocking back interest from Essendon, per AFL.com.au.

The Bombers were linked to the exciting 20-year-old late last month, with the Victorian club eyeing Rosas as a potential boost to their small forward stocks as they looked to reignite their Northern Territory connection.

West Coast gun Jack Redden will need to take a "significant pay cut" to remain at the Eagles in 2022.

The 30-year-old has reportedly been offered a slashed one-year deal to extend his stay in the blue and gold for a seventh season, reports 7 News' Ryan Daniels.

The offer is believed to be south of what Redden would be able to attain elsewhere, with West Coast feeling the pinch of their current financial situation.

Swans free agent George Hewett is "very likely" to land at Carlton this off-season, according to SEN's Sam Edmund.

Hewett, who is among several Sydney players still out-of-contract, could depart the Swans this exchange period as the club looks to wrestle with a reported strain on their available salary cap.

Swans chief executive Tom Harley recently flagged that discussions with Hewett were yet to progress, with the midfielder's future up in the air.

Melbourne could swoop on departing Docker Adam Cerra this off-season, with the Demons reportedly tabling an "attractive pitch" to the 21-year-old, per SEN's Sam Edmund.

While the Blues' chase for Cerra has been considered stronger than the rest of the pack, Melbourne could shock Carlton in luring the former first-round selection to Gosch's Paddock.

Edmund reports that the Demons are set to contest with the Blues for Cerra, despite their lack of valuable trade assets in the form of draft picks.

Collingwood have emerged as the leading candidate in the pursuit of Western Bulldogs midfielder Patrick Lipinski.

Lipinski is expected to request a trade away from the Whitten Oval when the Bulldogs season comes to an end as he looks for more senior footy and midfield opportunities.

The 23-year-old has been linked with both Carlton and Collingwood in recent months but the Pies appear to have their nose in front.

The impending salary cap squeeze facing Sydney is beginning to pose some big headaches for their list management team.

Former Pick 5 in the 2019 draft, Dylan Stephens, is reportedly 'assessing' his options and won't be short of suitors.

Fox Footy's Tom Morris has reported to AFL Tonight that Essendon has now joined Adelaide in the race for the highly-rated 20-year-old.

Carlton have been in the front seat to acquire Adam Cerra for some time, but now a new contender has seriously emerged.

Melbourne have reportedly met with the smooth midfielder and put a pitch to him that left Cerra seriously impressed.

Speaking on 3AW's Sportsday, Sam McClure has reported that Melbourne have pitched to the 21-year-old, but deal might come at a cost.

Departing Bombers veteran David Zaharakis remains open to options on his playing career after not being offered a new deal by Essendon for the 2022 season.

According to AFL.com.au, the 31-year-old is keen to keep his career alive after 13 seasons in the red sash.

The Bombers have bid farewell to Zaharakis and fellow veterans Cale Hooker and Patrick Ambrose so far this year, with the latter duo announcing their retirement from the game last month.

Adelaide defender Jake Kelly is set to join Essendon after informing Adelaide of his desire to return home to Victoria.

Having played 110-games in an Crows jumper since being selected with the 40th pick of the 2014 rookie draft, Kelly's services to the football club have seen him meet the markers to become an unrestricted free-agent.

Despite being sad to see the 26-year-old depart West Lakes, Adelaide's head of football Adam Kelly claimed that the Melburnian would depart with their blessing.

FULL STORY: Kelly set to link up with Essendon

Swans midfielder Jordan Dawson has requested a trade to his home state of South Australia.

Dawson, who is out-of-contract at the Swans as a restricted free agent, will require the club to agree to an exchange that will see the 24-year-old join either the Crows or Power.

The Robe product has played 64 games for the Swans since joining the club, making his debut in 2017.

A number Geelong's young stars could be set to lose patience with the club after their embarrassing 83-point loss to Melbourne in the preliminary final.

Geelong have opted over the years to play in the free agency market and trade in ready-made senior players to continue to contend. This at times has come at the expense of the development of younger players.

Fremantle have eye on Cerra replacement

Fremantle have conceded it is all-but a done deal that Adam Cerra will make his way to Victoria in the trade period, with his most likely landing spot being Carlton.

Cerra has developed into one the game's most exciting young midfielders and the Dockers will be filthy with losing a talent they spent four years developing.

Tall Tigers Callum Coleman-Jones and Mabior Chol are reportedly weighing up whether to end their tenures at Punt Road.

With the likely return of Ivan Soldo by Round 1, as well as the fact that Toby Nankervis is certain to remain on Richmond's list, the pair of rucking forwards could well see their playing time dry up next season.

According to reports from The Age, Coleman-Jones is deliberating whether to join North Melbourne or Gold Coast for the 2022 season, with both rival clubs having signalled their interest in signing the 22-year-old.

Jordan Dawson requested a trade from Sydney back to South Australia earlier this week as the Sydney salary cap squeeze begins to take some names.

Dawson had a career best season 2021 and was a key part of the Swans charge up the ladder but he and the Swans have been unable to come to terms on a new deal with his contract expiring at the end of this season.

Both Adelaide and Port Adelaide were said to be keen on landing Dawson but according to SEN's Sam Edmund, Dawson looks likely to join Port Adelaide.