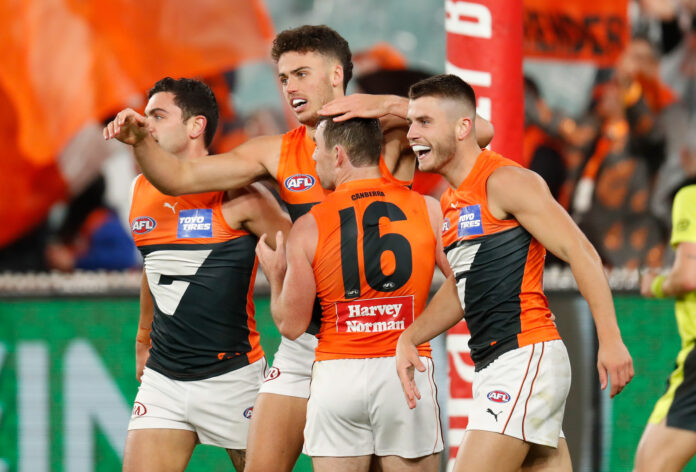 GWS Giants spearhead Jake Riccardi is being monitored by several Victorian clubs on his current contract situation, with Carlton named as one keen suitor to land the 21-year old's services, per The Herald Sun.

Riccardi burst onto the scene in 2020, booting six goals in his first two games and earning a rising star nomination whilst drawing comparisons to legendary key forwards such as Wayne Carey, Matthew Pavlich and Nick Riewoldt.

The Werribee native, selected by the Giants in the 2019 AFL Draft with pick 51 as a mature-age recruit from VFL side Werribee, has struggled however in 2021 to find a consistent spot in the Giants' 22.

Having played only 12 games in the past two seasons, including eight this year, Riccardi has played predominantly in the Giants' VFL side, showing outstanding form; kicking 18 goals from six games which includes an eight-goal haul against Aspley.

Due to limited opportunities in the senior side, even with Jesse Hogan's injury concerns and the departure of Jeremy Cameron, several Victorian clubs including Carlton have been keeping an eye on the talented key forward's next move in his AFL career.

The Giants have reportedly offered the high-flying forward a new contract to stay on at the club, per AFL Media.

"In terms of Jake and his progression, we're obviously really happy as a second-year key forward," Caruso said.

"He probably burst onto the scene a bit last year and we were rapt with that, but he's probably gone through some challenges this year and he's developing away in the VFL."

"He's working on some parts of his game that are going to hold him in good stead in the long run."

The Calder Cannons product won the Fothergill-Round-Mitchell Medal in 2019 as the best young talent in the VFL after booting 38 goals for Werribee.

Riccardi was a shining light for the Giants in 2020 averaging nearly two goals a game with limited opportunities.

The club has been busy with contract negotiations, locking in star midfielder Josh Kelly to a new eight-year deal, whilst contract talks have opened up with live-wire forward Bobby Hill.

The Giants take on Richmond on Friday night at Marvel Stadium in a bid to keep their finals hopes alive.