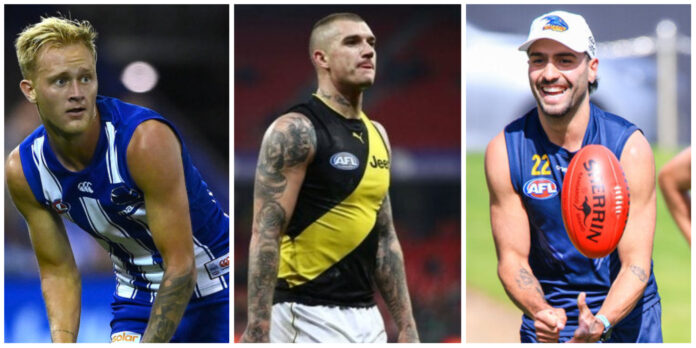 With the draft and trade frenzy coming to an end, clubs will be placing their attention toward pre-season training, while new recruits look to start the next chapter of their careers.

Players will be looking to impress coaches in the coming months on the track, whether it be through gruelling time trials or skill drills.

Others are hoping for an uninterrupted pre-season following a long injury battle through 2022, while the younger cohort at each club will be hoping to take major strides prior to the new year.

One of the biggest signings this off-season was Adelaide's acquisition of Izak Rankine in an $800k per year deal. The 22-year-old is one of the most exciting young players in the competition but is yet to show the consistent form that a contract like this typically warrants.

While Adelaide are still rebuilding with a young list, they are at a stage where they should start climbing the ladder and show signs of their potential. Rankine himself is at a similar stage; young, loaded with potential and ready to establish himself.

If he can improve his fitness to a midfielder's level while improving his forward craft and strength further, Crows fans could watch him take the league by storm very soon.

Rayner showed glimpses of superstardom this season with career highs across the board and some notable performances, including a four-goal best-on-ground performance against St Kilda in Round 22.

Rayner impacts matches forward of centre like a Dustin Martin-type and is explosive out of the midfield. If he can improve his running capacity and defensive accountability, he is another player who could shake the competition and become an All-Australian in 2023.

After one of the best off-seasons in AFL history, Brisbane are ready to chase a premiership within the next few years and the rise of Cam Rayner could be the difference between a premiership and a finals exit.

McGovern has never quite reached the potential that many thought he was capable of at the Crows as a spine player. He showed glimpses as a forward before finding a more suitable role in defence at Carlton. He has had a poor run with health in recent seasons but is primed for a full 2023 preseason.

If he too can improve his endurance and establish his role within the Blues back six, he should become a consistent intercepter and contribute to Carlton's finals hopes in a major way.

De Goey resurrected his diminishing reputation this season with some stellar finals performances which saw Collingwood come one kick short of a fairy-tale grand final appearance.

Like Cam Rayner, De Goey is a forward-of-centre contributor who hasn't been able to string together a consistent All-Australian level season.

It's a trend on this list but he is another player who would benefit from improving his tank and increasing his capacity to perform week in and week out. De Goey has the potential to reach the level of a Christian Petracca-like player and help Collingwood inflict major damage in their premiership window.

The former number one draft pick has struggled to take his game to the elite level while his side face perpetual struggles, but a fresh start under new coach Brad Scott could assist his development.

He rose steadily into his best year in 2020 where he averaged 22.1 disposals and 4.8 tackles in shortened quarters, but hasn't been able to reach this level since.

The Bombers success relies on improvements all around the ground, but this preseason will be big for McGrath in particular to establish himself as an Essendon star and potential future captain of the club.

Fyfe has become a controversial figure on Fremantle's list as they look to inflict damage in the finals for the forseeable future.

The rise of Andrew Brayshaw, Caleb Serong as well as the acquisitions of Will Brodie and Jaeger O'Meara have threatened his spot in the midfield dramatically.

The Dockers have trialled Fyfe at full-forward with hopes of making good use of his overhead marking ability but this strategy hasn't been productive as of yet.

If Fyfe can dedicate this preseason to becoming an effective key forward or demand his spot back in the midfield, Fremantle will be a dangerous prospect for opponents.

Ratugolea has struggled to earn a routine spot in a stacked Geelong forward line headlined by Tom Hawkins and Jeremy Cameron but has still shown glimpses of his potential with some strong games marking the ball and posing a goal threat.

2023 will be the final year on his current contract so he is playing both for his spot in a successful team and for maximum value in his next contract offer.

Now 24 years old, if he can continue to take big clunks and nail some set-shots early in the season, Ratugolea could be in for a big year and potentially a big future at Geelong or elsewhere.

There is more pressure than ever on Gold Coast to make their first finals appearance in history and after an absent 2022 season, Ben King could lead the Suns to a top-eight spot in 2023.

The emergence of Mabior Chol as a valuable key forward creates a dynamic tall duo, assuming King can continue to improve on the quality start to his career.

Like his brother Max, Ben King has potential to become a premier key position player in the competition and 2023 will be vital for his and Gold Coast's future.

He kicked the 10th most goals in 2021 as a 20/21-year-old. As he turns 23 midway through the season, Suns fans will hope he can grow into a top-five goal-kicker and be a primary factor in Gold Coast's potential rise up the ladder.

As a top five pick in 2019, Ash looked to be on the rise in 2021 with some monster performances; 35 disposals, 15 marks in round 6 vs Bulldogs, 28 disposals, 11 marks in Round 4 vs Collingwood. As the Giants have fallen down the ladder, however, Ash's form has followed.

In a dismal year for GWS in 2022, Ash averaged a below-par 16 disposals and couldn't impact games in the way that teammates like Tom Green could.

2023 should be the year where Ash shows his top-five talent and puts together more of the superstar performances we saw in 2021.

After a positive first year under Sam Mitchell, Hawthorn's rebuild is well and truly underway with the departures of Tom Mitchell, Jaeger O'Meara, Jack Gunston and Liam Shiels. These losses leave gaping holes through the Hawk's midfield, which will now be led by a 24-year-old James Worpel in 2023.

After 11 games in his first year, Worpel emerged as a star in 2019, averaging over 26 disposals per game and polling 10 Brownlow votes. He hasn't been able to sustain this form since the covid-struck 2020 season however, dropping to a 21 disposal average in 2021 season and 15 per game in 2022.

The pressure is on Worpel to develop into a star as Hawthorn seek to enter a premiership window in the next five years.

2021 gave us one of the feel-good stories in football with the revival of Ben Brown in the AFL landscape. After a shocking form drop in his time with the Kangaroos, Brown's career was on life-support before Melbourne acquired him and allowed him to reinvigorate his near All-Australian form.

2022 however, saw Melbourne's forward efficiency exposed as they struggled to find the inside 50 connection they had in 2021. Ben Brown was a liability at times, struggling to hold his own in marking contests and providing little at ground level. Melbourne's success in 2023 relies on improvements forward of centre and Ben Brown is a key factor in that.

If he can become an aerial headache for opposition defenders impact games with his strong leading ability once again, the sky is the limit for the Demons.

Jaidyn Stephenson's poor form in recent seasons has been symbolic of North Melbourne's terminal struggles. Since his blistering first season with the Magpies in 2018, Stephenson has been faced with many career-altering off-field scandals and events which has heavily impacted his status in the AFL.

His gambling incident in 2019 and bike accident in 2021 were notable occurrences which stifled his career considerably. 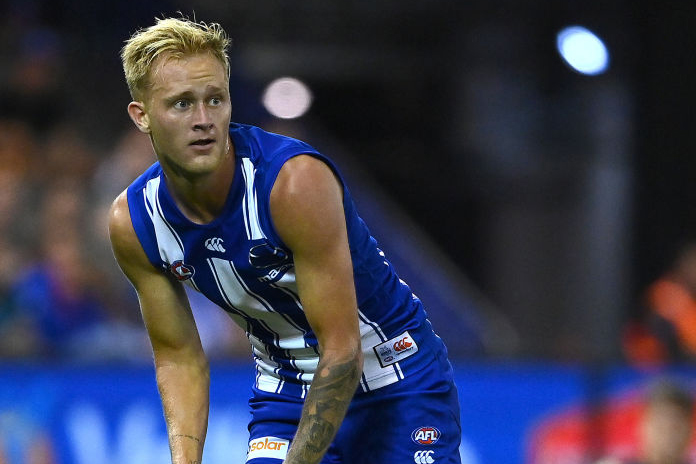 Under the illustrious Alastair Clarkson in 2023 and onwards, Stephenson should be provided with the tools to succeed in a new environment. This pre-season will be telling, he could either show that he is capable of being a future star of the league, or show that he is not up to the AFL standard.

Sam Hayes has been in the AFL system for five seasons now, and is yet to show the ability to be a full-time ruckman at the elite level. He managed seven games in 2022 to get his career started, but struggled notably to run out games.

As Scott Lycett enters his 30s, Hayes will be tasked with developing into Port Adelaide's primary ruckman while Finlayson plays the utility role.

He has shown ability to dominate at reserves level and has the capacity to win 30+ hit-outs per game at AFL level, the focus for Hayes is to develop his tank and enter every ruck contest he can around the ground.

The finals GOAT has come back down to earth since his third premiership and Norm Mmith Medal in 2020, but as Richmond look to win another premiership in 2023 with an improved list, Dusty has a chance to add further to his already illustrious legacy.

A fourth premiership would put him further into the all-time GOAT debate. A fourth Norm Smith would make him a consensus top three all time player.

Richmond fans will hope Dusty can regain his finals form with a big 2023 preseason and lead the tigers to a landmark fourth premiership since 2017.

St Kilda saw the best of Hunter Clark in 2020 where he averaged 17 disposals in shortened quarters and provided elite ball use and composure out of defensive 50.

Poor luck with injury has hampered his form and seen him in and out of the lineup and a shoulder collision against Carlton ended his 2022 campaign prematurely.

Under Ross Lyon, Saints fans will hope Clark can return to form and impact games off half-back and potentially earn some midfield minutes. St Kilda's future success relies on the development of young stars like Hunter Clark and 2023 will be important for the growth of the club.

Lance Franklin will enter the 2023 season at 37 years of age, meaning Logan McDonald should be primed to take his full-forward spot as he continues to develop his skill set and body.

He will be 21 at the start of the season and should hopefully start to show signs of future superstardom after two positive seasons to start his career.

Sydney have tended not to play McDonald and Franklin in the same lineup given the presence of Sam Reid as a secondary key forward and around-the-ground utility.

For McDonald to earn a routine spot in this Swan's side, he must prove to be a clear-cut better option than Buddy and a big preseason will be crucial to that.

Oscar Allen sat out the entire 2022 season with a foot injury and watched his side underperform significantly in a difficult year. Many would agree that the entire West Coast squad needs a productive pre-season, primarily to improve their running capacity.

However, it is Oscar Allen who looks to be the future of the Eagles after some quality early career seasons and some best-on-ground performances.

No one expects West Coast to inflict much damage in the foreseeable future, but the rise of Oscar Allen will put bums on seats and make him the foundational piece of their rebuild.

With a top-heavy list in 2023, Josh Bruce may struggle to find a place in a Bulldog's forward line led by Aaron Naughton, Jamarra Ugle-Hagan and now Sam Darcy.

The acquisition of Liam Jones should make life easier for the Bulldogs backline, but there is pressure on Josh Bruce to perform in 2023 or else enjoy a spot in the reserves.