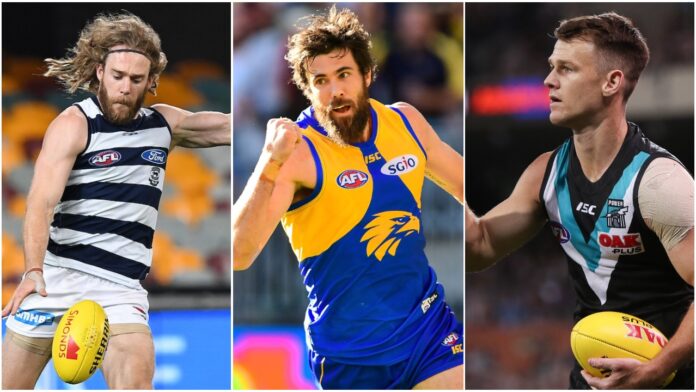 With the AFL Finals series approaching, season 2021 is coming towards its climax. For the 10 teams who don't feature in the September action they turn their attention to a number of list decisions for 2022.

We decided to put together a team of the best out-of-contract players heading into the finals and off-season.

The 24 year-old Eagle has featured in 14 games so far this season averaging 19 disposals per game. A member of West Coast's 2018 premiership team, Duggan has experienced an injury interrupted season, missing extended periods due to ongoing knee issues.

Robbie Tarrant falls into the unrestricted free agent category at season's end. Tarrant has featured in 10 games this season, averaging 14 disposals and 6 marks per game. Th key defender is 32 years of age.

The 301-game veteran and West Coast Eagles legend is also an unrestricted free agent this off season. The question that lingers over Hurn will be whether he decides to retire or go around one more time with the Eagles.

Prior to a calf injury in Round 21, the 33-year-old was having a terrific season averaging 22 disposals and seven marks per contest.

Playing down in defence in 2021, Jack Ziebell found plenty of the footy. Averaging 25 disposals and seven marks per game, the Kangaroos captain played a vital role in steadying the ship down back.

Moving forward, the out-of-contract veteran is still only 30 years of age and should have some good footy ahead of him.

Phil Davis is another veteran defender who is coming out-of-contract to end 2021. The former Giants captain has only managed 10 games this season averaging 10 disposals per outing.

Aaron Hall has had a career best season in 2021, having no troubles finding the footy. The Kangaroos half-back is averaging 27 disposals and ranks fifth in total metres gained in the league.

Hall turns 31 in November and is out-of-contract at Arden Street.