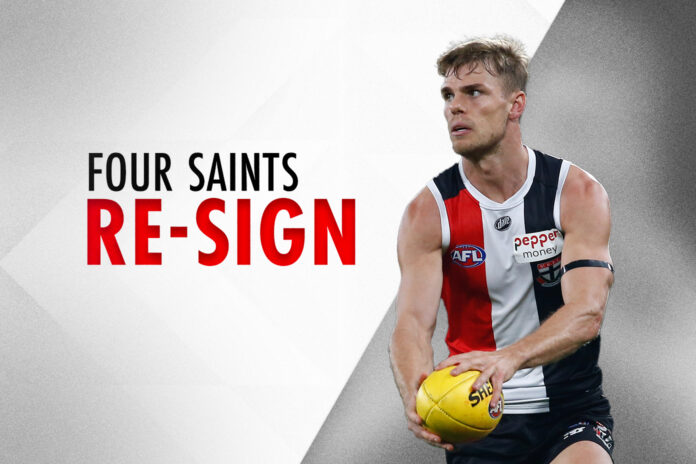 St Kilda have announced the re-signing of four players for the 2023 season, with Mason Wood, Thomas Highmore, Tom Campbell and Jack Peris each signing on for an additional year.

Wood inks his new deal following a 19-game season in 2022, averaging 16.6 disposals per game in his second season at the Saints.

Highmore managed just three games at senior level this season as he struggled to break into Brett Ratten's side after 13 games in his debut 2021 campaign. The young Canberran was drafted with pick 45 in the 2020 national draft.

Campbell played just two senior games for the Saints in his first season at the club after stints at both the Western Bulldogs and North Melbourne. The veteran ruckman was a regular fixture in the VFL, featuring for Sandringham on 12 occasions.

With the recent retirement of Paddy Ryder, Campbell will be hoping for more regular game time in 2023.

Peris, drafted as a Category B Rookie from the Saints' Next Generation Academy, is yet to make his debut for the club but finished inside the top ten in Sandringham's best and fairest count.

St Kilda Head of List Management James Gallagher said the club was pleased to have the quartet extend at Moorabbin.

“We’re pleased to have Mason, Tom, Jack and Tom extend their time at the club,” Gallagher said.

"All four players have put in a commendable amount of work both on and off the track this year and, irrespective of the number of senior games played, that is a trait we’re always happy to see.

“As we look towards the upcoming draft and trade periods, we will look to further consolidate and strengthen our list, but these recent extensions are important in shoring up our depth across each line.”