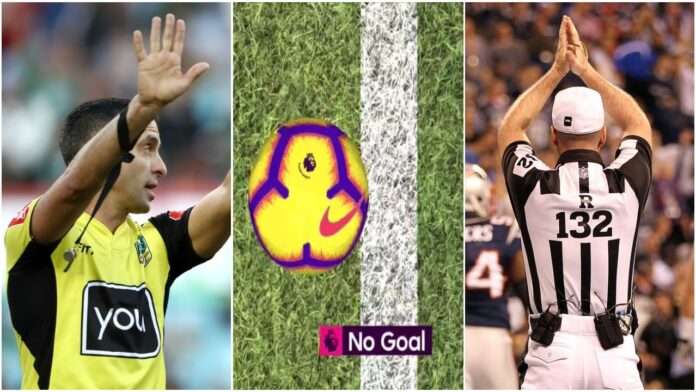 As of late, it appears to be an annual tradition for the heads at AFL House to add several new rules to the competition each off-season, as the league continues on its path to Americanising our game.

Aside from a handful of changes in the last few years, mainly the 6-6-6 and kick -n rules, the game seemed to peak 10-15 years ago in terms of its enjoyment to officiating ratio. Nonetheless, the league insists on continuous evolution as they look to increase the speed, scoring and engagement of Aussie Rules.

This begs the question, what's next? Spoiler alert, it’s not replacing throw-ins for last touched…

What we have below is six new rule proposals for the 2022 season, three that are realistic and three that are fun to think about. These new six hypothetical rules borrow from multiple codes and leagues around the world, and depending on how much of a footy purist you are, will either drive you insane or leave you thinking of what could be.

Here’s six hypothetical rule changes that the AFL should consider for 2022 and beyond.

The video assistant referee is a relatively new revelation in soccer, or football, and has almost instantly tidied up the areas of grey afforded to human error when officiating.

VAR is used in four instances, these being:

It’s quite simple, an umpire makes a critical call and has near-immediate feedback to whether it was technically the correct decision or not. The AFL would be better off having such a system in play to reward rightful free-kicks in crucial instances, like the Zac Bailey tackle on Mark Blicavs earlier this year.

The league can also increase the accuracy around goal reviews that the current goal-line technology leaves up for debate. Furthermore, they can also penalise unjust off-the-ball actions that often go unnoticed by the field umpires as they keep their eyes on play.

The biggest factor in implementing such technology is the feasibility related to cost and implementation league-wide. In the worst-case scenario, the league should invest what they can to have this technology available for the finals given this is the most crucial point of the season.

Why must the AFL adhere to this age-old rule that isn't applicable to scoring in similar football codes like rugby and gridiron?

Whether kicking a conversion or field goal you always put points on the board as long as the ball goes through the big sticks. You can even return a kick that's ricocheted off the uprights in the NFL, yet the AFL won’t recognise a goal, let alone allow play to continue if the ball strikes one of the four posts.

'Posters' aren't really a common occurrence in footy anyway, so why not ditch this rule and allow games to have an extra element of chaos. The crazy thing is that the league even trialled the rule during the 2005 pre-season then seemingly let it mull around in obscurity for several more pre-seasons.

This is a great way to increase the speed and ferocity of the game without physically compromising a player’s adaptation to the rules, given the split-second ability to read such a play is largely mental in nature.

How often does an unjust act occur during a game go unpunished in footy until headlines of the incident dominate the next weeks’ news cycle?

The above methods of penalising undisciplined players have immediate on-field consequences for their team's and work to enforce fair and safe play, in regards to rugby, gridiron and soccer.

How the AFL hasn't already adopted such a system is almost unfathomable given the propensity in which some regular offenders choose to play the game.

However, there’s a significant difference between a sloppy play and a malicious attack, which is why introducing cards will assist in deciphering these acts and thus penalise teams appropriately and immediately. These decisions will obviously need some type of VAR official that can review the acts in question and determine whether or not the action deserves to be penalised, almost like an in-game tribunal.

Again the logistics of such a process will need to be ironed out as not to make the on-field umpiring more difficult than it already is.

By the AFL implementing such a system they should be able to reduce the number of egregious incidents that take place in the game, again, this isn't penalising a player for a mistimed bump or tackle, this is penalising someone who attempts to harm a fellow player.

In the NFL, if an offensive player is tackled inside their own end-zone the defence is awarded two points and possession (via a punt).

This is an extreme adaptation to the current set of rules but aspects of the safety will make for more frantic and clever defending when the ball drops near the goal square.

As things currently are; the defender can dispose of the ball into their oppositions’ goal for a rushed behind provided they're inside 10 meters from said goal.

Thats fine. But what if the defender was tackled over the goal line and the offence was awarded a safety (three points) as a result? The transfer of possession wouldn't happen, we’d stick to the kick-ins like normal, but this rule would make close games more intriguing if the defenders couldn't just bail themselves out with try-like leaps through the goals.

Plus if a defender doesn't have the wherewithal to dispose of the ball in such a situation, shouldn't they be penalised as a result? It’s either a safety or holding the ball.

5. Play-on called for backwards kicks not in attacking half (inverted rugby rule)

It seems a tad harsh to penalise plays that aren't actually illegal but it also makes sense to not reward calculated time wasting as well. By not paying a mark for backward kicks, the current incentive teams have to play keepings off will dissipate instantly. They’ll still be able to go this route if they want but it will be at their own risk and without the safety of a mark.

The AFL actually introduced a similar rule back in the 2006 pre-season, with the exception being that play on would be called unless the backwards kick occurred in a team's attacking 50. This again is harsh as most teams try and change angles when advancing the ball forward, which is probably why this iteration of the rule was never acted upon further.

If the AFL were to introduce such a rule for 2022 it wouldn't be difficult for the umpires and players to take to, it will be awkward at first but it’s quite realistic and feasible to introduce. The game will also be guaranteed to stay ultra attacking.

Let me preface this proposal by first stating that this type of ‘timeout’ isn't to give players extra rest, it’s solely for the purpose of advancing the ball to midfield in the same way that the ball can be advanced to the front court in basketball.

How exciting is it in the NBA, or NBL or whatever basketball league you follow, when a team saves their last timeout for the dying seconds where they can advance to the front-court and unload a last-second shot? It generates either a moment of pure ecstasy or dread as the play unfolds in a type of real-time slow motion.

The AFL can add extra drama to games by allowing teams one timeout a game, where said timeout can only be called when play is dead, like during a throw-in, ball-up or kick-in. The ball would then be advanced to the centre square for a ball up, as if a goal has been kicked, with one final clearance and quick kick forward allowing desperate teams one final roll of the dice.

While this type of rule does partly take away from the fatigue induced bravado teams need to generate a final surge forward when stuck in their back-half, it also offers players a chance to truly fight to the final siren.

Rule changes are likely to rear their ugly mugs again sometime this off-season and what they’ll end up being is unknown to that outside of the AFL head office.

If the league does want to continue increasing the speed of play and scoring opportunities for teams, it should look to implement elements from different sporting codes to do so rather than continuing to increase the physical stresses placed on their athletes, ie. capping interchanges.

Some of the mentioned rule changes were more radical than others but they all offer something in regards to improving the integrity of play, scoring propensity and cadence of general play.

Let us know what rule changes you think the AFL should implement for the upcoming season in the comments below.

Noble lauds mindset of new Roo on the block