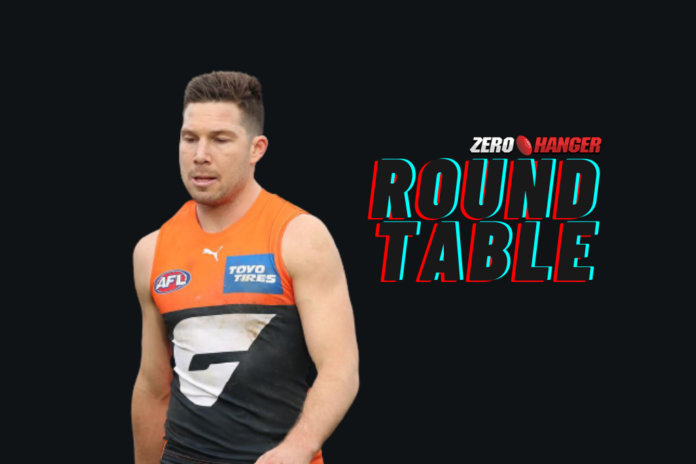 The AFL have done a great job in navigating both last season and this season in the middle of a pandemic, and should be applauded for it.

The COVID-19 situation however is starting to get out of hand in Australia - with Victoria, New South Wales and South Australia all in lockdown due to cases of the Delta variant popping up in those states.

It means that teams such as Adelaide and Port Adelaide are having to fly from one lockdown state to another to play against Victorian teams in Melbourne, using potential 'sterile corridors' to avoid contact with the public.

Most other teams are either situated in Victoria, Queensland or Perth during this period.

Players are also getting caught up in the COVID madness, with Callum Mills and Toby Greene told to isolate after attending AAMI Park last week, which turned out to be an exposure site. The same thing has happened to Josh Dunkley going to get a coffee at a coffee shop, and Rowan Marshall going to a bar.

With players, staff and close contacts of the players being told to isolate, it makes it even tougher for the AFL to work around the several states' strict restrictions at the moment, and it really begs the question: Should the AFL pause the season for a week just to settle everything down?

Hear the thoughts of the Zero Hanger team below:

Aidan O'Carroll: I think the AFL should pause the season just for a week to let everything settle down with Covid. Hopefully in a weeks time, at least Victoria and South Australia will be out of lockdown and the players that have to isolate will now be out of quarantine and ready to play.

I know pausing the season would cause headaches for the AFL, but another possibility could be moving the pre-finals bye to this next weekend, which would mean pushing the fixture a week in advance after the week off and get straight into the finals after the regular season.

It may disadvantage some teams who want to get healthy and rest up before the finals, but it would benefit the entire league and health and safety of the players and staff, as too many players and staff are having to isolate in the past week and pausing the season could be the best solution to stop the COVID situation escalating any further in the AFL.

Jake Benoiton: The bye must be brought forward to this week. Half the country is in lockdown and there are players missing through isolation despite having done nothing wrong. The pre-finals bye is rubbish anyway and this is a good way to shift it and allow the season a chance to breathe and prepare for the final months.

Yes, the AFL season is a war of attrition. But these isolation circumstances aren't attrition. They are dumb luck and teams/players shouldn't be punished for living inside the rules allowed to them. The pre-finals bye gives teams a genuine advantage if they have players injured and close to returning on the eve of finals and it's not what the game is about. It's a no-brainer, but it probably won't happen.

Michael Georgiou: I think the AFL should pause the season for a week, by bringing the pre finals bye forward. With so many states entering lockdown or in the middle of a lockdown all at once, AFL needs some time to consider it’s next move. We saw this week, the Port Adelaide vs Collingwood changed time and location several times, this can be avoided.

Will Guthrie: As much as I’d like this week’s game to be postponed (Saints fan and losing Marshall is a killer), the uncertainty around the next month in regards to lockdowns etc has me leaning towards pushing ahead and getting as much of the season done as possible in case a shutdown occurs again and finals need to be played when we resume.
The compromise that could work for everyone however, might be if the AFL brought the pre finals bye forward to this weekend, in which case the big picture shouldn’t be altered too much.