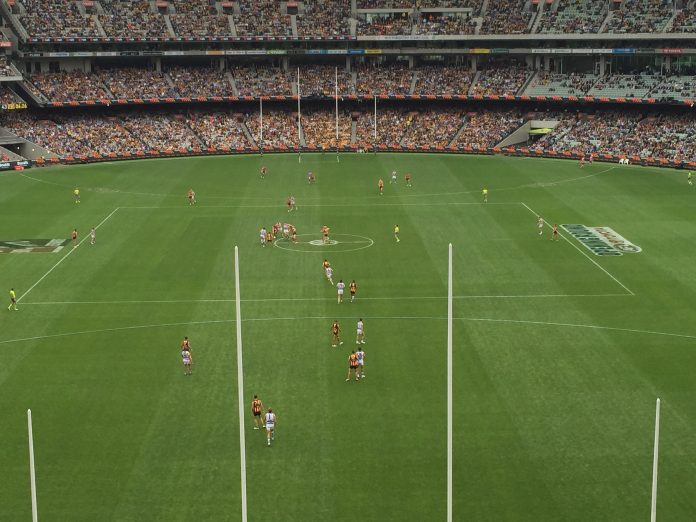 Footy is back and what a great Round 1 it was, one of the best opening rounds in recent memory! Every home team picked up the four points which is a rarity and we saw the new rule changes in full flight. So let’s take a look at our winners and losers from week one.

Nine teams managed to score over a hundred points over the weekend’s action with two of those sides ending up on the losing end of the scoreboard.

The new rule changes have encouraged a more attacking brand of our game with players now more inclined to play on with the new protected zone and more likely to keep the ball in play with the new interpretation of the deliberate out-of-bounds rule.

We are seeing more goals being kicked from over-the-top play and we are also witnessing the game open up for the better with the congested style of play being a thing of the past.

The average score was 97 points – almost two goals better than last season’s 197-game average of 86 points. The game has definitely opened up, but it remains to be seen whether AFL coaches will prefer shoot-outs or aim for defensive footy.

The less I say about this the better, this definitely, but not entirely, overshadowed what was a great round of footy as it has everyone in the AFL community talking.

It must be stressed that this is an AFL issue, not just Collingwood’s and the league needs to find a way to put a stop to these sort of misdemeanours. We would rather be talking about the thrilling round we just witnessed than associating drugs with our great yet again.

Whether or not these allegations are true, the players are meant be acting as role models for young kids and if they’re taking drugs whether its during the season or at the end the of year, they’re still employed and contracted by the club and partaking in this sort of activity is simply not on.

Any normal working-employee who gets caught taking illicit drugs would be immediately sacked so why should AFL players be treated any differently? Put aside the confidentiality agreement between the players association and the players themselves, information got leaked and they got found out, so if it all turns out to be true, then the guilty should be rightly punished.

The two big winners from round 1 for me are Geelong and the Western Bulldogs, not just for their wins, but the teams they beat.

One completely obliterated a side that finished first at the end of 23 rounds last season and the other knocked off the reigning premiers.

I was one who was sceptical about the Bulldogs this year, but after what I saw on Sunday afternoon, I may have to change my prediction. Either I witnessed side that is completely declining or that the Dogs are just that good.

My Impression from that game is that the Bulldogs don’t look scared of anyone, they really couldn’t care less who they are playing and how good or big they are and that is a quite brilliant mentality to have.

Geelong meanwhile dominated last season’s premiers for three quarters. Take away the third quarter and Hawthorn were simply terrible, a far cry from what they were last season. With that being said, they were missing big names in Roughead, Hill and Shiels but Geelong still needed to beat them and they did exactly that.

The Cats looked like a renewed outfit and with Dangerfield immediately making his presence known, they’re going to be a scary opposition for any team this season. The midfield of Dangerfield, Selwood and Blicavs is going to blow a lot of teams out of the water in 2016.

I know it’s only round 1 but the retirements of both Lake and Hale are going to hurt Hawthorn and they may not be as dominant this year. Hawthorn are in a very similar situation to what Geelong were in after 2011 and their superstars are ageing and don’t have a lot of footy left in them.

I have Collingwood in my top eight this season. Yeah I know right, wow!

They literally dished up nothing on Saturday night and were blown away by a strong Sydney Swans outfit. Whether or not the drugs scandal affected them, its not good enough from a side that has finals aspirations.

With Steele Sidebottom ruled out for a few weeks and Dane Swan out injured for what looks like most of the season, Collingwood’s season could be over before it’s even properly begun.

I had Fremantle at third going into this season, but after their performance against the Dogs, I really truly think this side is in big trouble.

Their home form might just get them into the four, but don’t expect them to make an impression. They’ve got no forward line and they failed to sign any key positions forwards during the off-season.

On top of that, Nat Fyfe is playing injured and I highly doubt he’ll ever be the same again after what happened with his leg last season, and their skipper David Mundy is also playing injured.

The thing for me is that Ross Lyon doesn’t change anything. He did the same thing at St Kilda and now it’s happening at Fremantle, it just taken longer for people to realise it. He’s inability to trust youth is a huge downside for Freo and I feel its going to bite them in the backside come the end of the season.

You don’t lose three grand finals as a coach without there being a reasonable explanation as to why he can’t get it done on the big stage.

They’re flying! Literally. What a start for the Eagles, pumping home 166 points in what was a statement to the competition that they’re the team to beat in 2016.

I have them as my flag favourites and rightly so. Just try and beat them at Subiaco this season, it will be the toughest assignment for any team this year.

Josh Kennedy took off where he left off and Priddis looks like he hasn’t missed a beat. This week against the Hawks will be a completely different game to what the Grand Final was and I have them knocking off the premiers on their home patch.

Did it feel like we were missing something over the weekend?

Ah that’s right, a game on Good Friday. It didn’t happen this season, which is a shame but surely it will happen in 2017 with the AFL finally realising the revenue that can be generate from the match.

The NRL has it, so it’s only logical for the AFL to introduce it. It just feels like the next step.