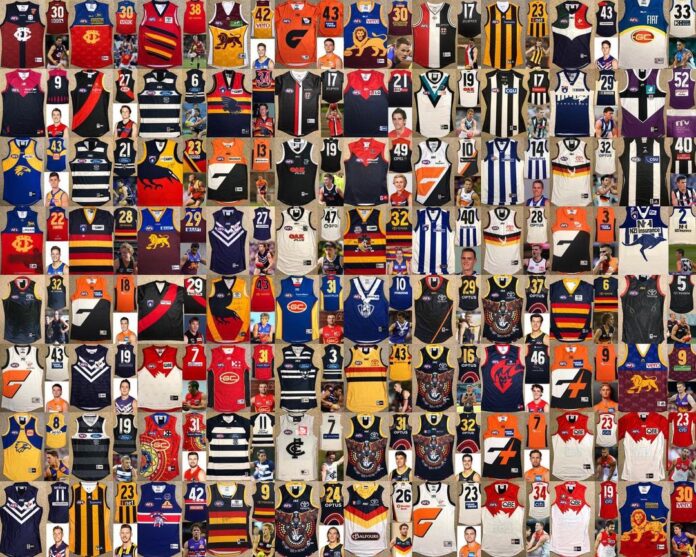 Meet Andy Munro - the man with the craziest footy jumper collection in the country.

Hailing from the small country town of Naracoorte in South Australia - with a population of around 6,000 people and hometown of Brownlow medallist Lachie Neale - Munro is obsessed with collecting footy jumpers.

Munro owns around 200 kits, predominately '90s classics, player editions and rare designs - basically anything he can get his hands on that is unique.

Most of his collection is of players from South-East South Australia who originally played in the local leagues.

That's a bit of an estimate but I reckon that's about right. I have a lot of soccer jumpers as well - easily over 50. 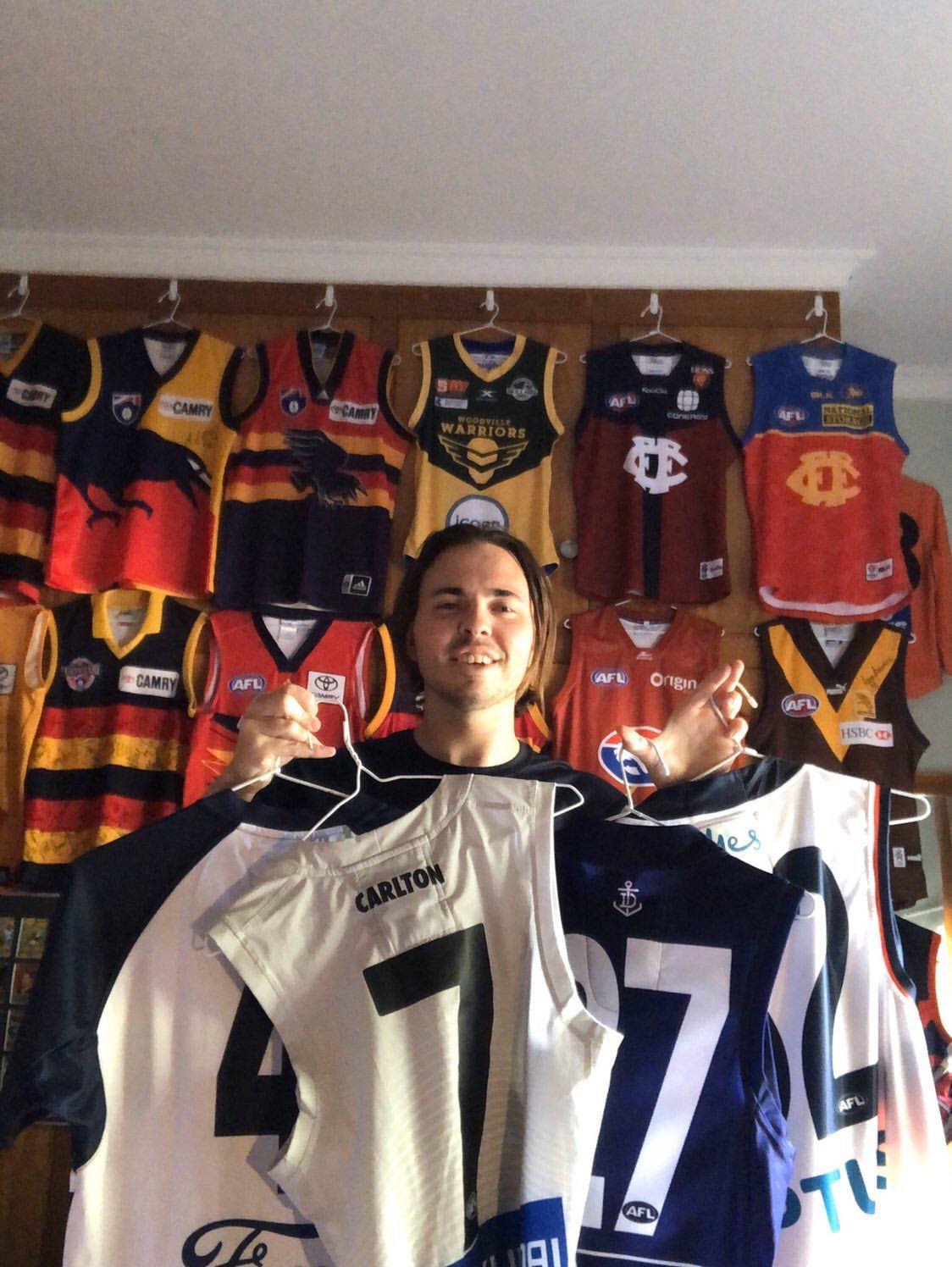 When he's not collecting guernseys, the 25-year old works on his family farm near Narracoorte, four hours south of Adelaide.

Munro described the aftermath of the Crows' premiership loss and the slide that followed in 2018 as a tough time to be a fan as he looked to turn to something else. It was then that his interest in footy jumpers ignited.

And he's not alone. Munro discovered a whole community of footy jumper collectors which spurred his passion.

"I was just on Ebay buying old books, cards, stickers and got a few jumpers," he said.

"I was just going to sell them but I got a few '90s jumpers and I thought this was pretty cool. Then I found the community of collectors which really got me going and it has grown since then.

"I didn't know there was a community of collectors at the time and took a bit of inspiration from them and slowly collected a few. On Facebook groups, I didn't even know these communities existed, and just got right into it."

While his allegiance is to the Crows, Munro wanted to extend his collection to all clubs to seperate himself from other guernsey fanatics.

Munro has always been fascinated by different jumpers and designs dating back to his childhood days on footyjumpers.com.

"I've always had a strong interest in jumpers for some reason. I remember jumping on footyjumpers.com and have been looking on there since I was 10 or 11 years old, Munro said.

"I've always been fascinated by different designs. I could just collect Crows jumpers but at the time we'd just lost the premiership and it was a really bad time. I wanted to expand, most people just collect their club but I want to do something different."

The first addition of his collection was a Lachie Neale player edition Fremantle guernsey just after the superstar midfielder's move to Brisbane.

Munro landed the jumper for a budget price of $100, a fee which he estimates would have quadrupled since.

Interestingly, he does not own a Neale Lions jumper. And coming off his 2020 Brownlow Medal win, Munro doesn't plan on buying one anytime soon.

"I do need a Lachie Neale Brisbane, because he's from my town and played for my old footy club. I reckon one sold at auction for a grand and that was probably a good price. I've never spent that much, so I might need to wait a few years."

Munro's collection of local SA players is still not complete. He won't stop until he owns a jumper of every local player who was on an AFL list, even if they never played a senior game.

"I think I've got about 30 to go, because I try and get every player and every club, even players who didn't get a name. So if they were listed, they're on my list. Then I've got the '90s ones as well, which I only need about three of four to complete my sublimated '90s collection."

As for his favourite jumper, he could not go past his treasured Andrew McLeod '90s prototype.

"It's hard to pick. My favourite design is a Crows '90s pre-season design and I do have a prototype Andrew McLeod one of that," he said.

"It's not worn by him, it was an early prototype by Puma, this was when pollyester jumpers were just coming in so they made heaps of designs. It's Andrew McLeod, No. 23 on the back, signed by him so thats probably my favourite."

Since starting up his TikTok account, Munro receives frequent offers from his massive collection or queries around availability of certain kits, but admits only some of his are up for sale.

And it's fair to say the elder collectors don't appreciate some of the offers that come their way from younger generations.

"Ever since I started TikTok I probably get a handful of messages a day asking for certain clubs, but I only have a few to sell. So most of the time I don't have anything, but I do get quite a bit. That's what happens when you put yourself out there.

"There's a few older collectors who have been collecting for years and they're not too keen on all these kids messaging them asking what they have for sale. They ask for like a Buddy Franklin jumper and want it for $50 - that's not how it works."

Munro does not have massive plans to build his collection in the future, with the top of his priority list to complete his local players and 90s sublimated sets.

However, the temptation to buy a jumper - any jumper - remains weekly.

"I mostly go with the flow. I do have a goal of reaching my local player collection, I'm about halfway off completing that.

"The '90s players are really hard to get, the modern players are what I'm trying to focus on for now. I do get a bit of an itch if I don't buy a few jumpers every week, it's a bit addictive. But that's when I have to sell."

Check out more of Munro's jumper collection on his Instagram here and his TikTok here.