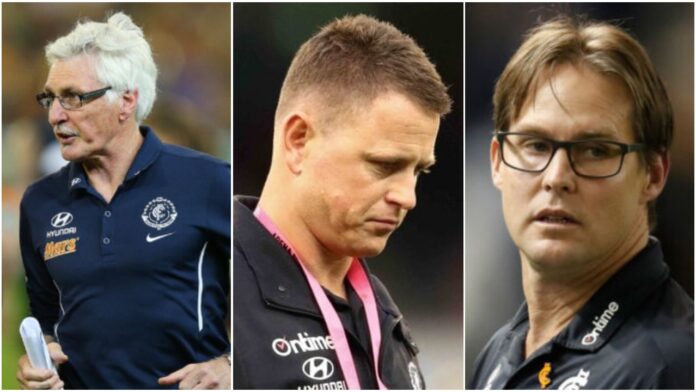 The Carlton Football Club have moved on from another coach in David Teague in what seems to be a three-year tradition at the football club.

Many believe it was warranted, many believe it wasn’t but but we all agree with it was a scape goat firing and that Teague didn’t have the support he needed to at least turn the wheel at Carlton.

Whether you think he is a good coach or not is a seperate discussion, but I truely think with the cards he has been dealt with the Blues, you could put Alastair Clarkson in the same seat and it doesn’t change much.

Let’s start with Carlton as a football club. In more relatable terms, the Carlton Football Club is like that one tinder date. Photos and conversation on-point and you’re thinking this could be good, until you meet them in person and you realise things aren't how you hoped, leaving you flat and disappointed.

Carlton are similar, they have a great history, loyal fans, multiple All-Australian's and potential greats of the future, but it just doesn’t seem to work on the field no matter who is in the coach's seat.

The club isn't unfamiliar with leaving fans disappointed. This dates back to the days when current St Kilda coach Brett Ratten was in charge of the Blues. After missing the finals in 2012, Ratten was officially moved on and replaced with coaching great Mick Malthouse.

With Malthouse they achieved a level of success with a lucky finals berth from finishing 9th due to the Essendon supplements scandal that kicked them out of the finals. The Malthouse-led Blues went on to beat Richmond in the elimination final and then eventually lost to the Sydney swans in the semi-final the following week, which many thought would be the making of the Blues.

That 2012 season led on to what would be called cringe worthy membership slogans such as "they know we’re coming" and "no passengers", which added internal pressure to the Blues to become finals contenders.

After two underwhelming years with Malthouse at the helm, he was given the sack and, maybe rightfully so, many thought he was past the modern times.

Carlton then moved onto a more bubbly and cheerful coach in Brendon Bolton, this was supposed to be the straw that broke the camel's back in terms of success at the club. While showing flashes at times, Carlton stagnated in four years under Bolton and he was officially relieved of his duties in 2019.

Being a mid-season firing, forward coach David Teague took over for the reminder of the year. Carlton thrived and every Carlton supporter and his dog were waving the premiership flag, they looked like a completely different team and the "Teague Train" was trending.

At the conclusion of the 2019 season, the "Teague Train" was given the full-time coaching role. In more relatable terms, this was the Michael Jackson This Is It tour in which it was Carlton’s spectacular comeback to football, they had the star players, they have the rich history and then they had their dream coach in Teague.

Both didn’t pan out, as Teague was sacked before he was given a good shot at finals.

There is a running pattern here, and I feel that the Carlton board has very big expectations, which can be warranted at times, but you also need to be realistic and need to support their coaches more.

Like Richmond have done with Hardwick, Port Adelaide have done with Ken Hinkley, Geelong have with Chris Scott and Melbourne have done with Simon Goodwin, when the times got tough they revamped the whole coaching roster, got on the same page as the coach and we’re aligned with success.

I feel like Carlton lack massively in this area, they’ve had the same assistant coaches for many years, a lot of their young players who were high draft picks haven’t panned out and they all don’t seem on the same page.

I think the problem with Carlton is a problem within the club. Sure you can blame coaches, players and say whatever excuse under the sun. The common theme in all successful clubs is that there is strong leadership from the top, players buy into the culture and everyone does their jobs.

I feel this is the opposite to Carlton, hence why I think no matter what coach you get or what players you get I think you’ll be in the same situation unless you change the fabric inside the club and stop blaming the coaches.