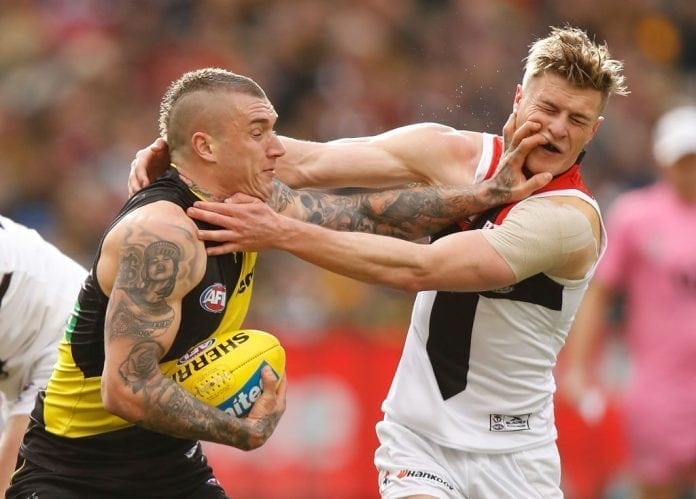 Team news: Saints fans can expect to see Seb Ross, Blake Acres and Josh Battle back in the team this weekend, however, defender Jimmy Webster could miss with a groin injury.

Injury Watch: Richmond are likely to have premiership players Nathan Broad, Dan Butler and Jack Graham back in time for finals as well as Nathan Drummond and Reece Conca.

Prediction: The Saints knocked off the Tigers in this match last year but these sides have changed significantly since then and the reigning premiers will be looking to bounce back after last week’s loss. Richmond by 27 points.

Team news: Big man Mason Cox was a late out for the Pies last week due to hamstring soreness but the club is hopeful he will be right to play this week.

North Melbourne tagger Ben Jacobs has been suffering from delayed concussion for a number of weeks now and is a 50/50 chance to play this weekend.

Injury Watch: Collingwood’s star midfielder Adam Treloar came out this week and said his recovery from hamstring surgery is going well and he is hopeful to be back playing before finals.

Prediction: North Melbourne have been very good this year but Collingwood relish the MCG and they need the win to solidify their top four spot. Collingwood by nine points.

Team news: The word is that Sydney will likely be without their skipper Josh Kennedy this weekend but they will have Heath Grundy back who was managed last week.

Injury Watch: Suns skipper Steven May looked to have aggravated his troublesome hip last week but it seems as though he will be fine to take on the Swans.

Prediction: Sydney at home will be too good for the struggling Suns. Sydney by 45 points

Team news: After being a late out for the last two weeks, the Bombers are hoping Orazio Fantasia will be fit to take on the Dockers.

There is every chance we could see Harley Bennell play his first game of AFL footy since round 23 last year.

Injury Watch: David Zaharakis (Essendon) has recovered from a broken collar bone ahead of schedule and could play this week but if not, he should be ready to go next week.

Freo skipper Nat Fyfe is on track to return to the field in round 20 for the Western Derby.

Prediction: On paper you would think Essendon should just win but Ross Lyon coaches well against them and seems to have a nick to shutting down their fast ball movement. No Fyfe and Aaron Sandilands make this a tougher challenge though. Essendon by 15 points

Team news: Veteran Luke Hodge is a chance to return to the Lions line-up this weekend.

The Crows could have Mitch McGovern back for his first game since round eight after suffering an ankle injury.

Injury Watch: Brodie Smith will return to the SANFL this weekend after tearing his ACL and having a knee reconstruction during last year’s finals series.

Prediction: A big danger game for the Crows taking on the in form and incredibly confident Lions at home. It would be no surprise if an upset was caused here but Adelaide need the win to keep their finals chances alive and class and experience should prevail in what looks like a tight match. Adelaide by 15 points

Team news: Lachie Henderson looks set to come back in for Geelong but there is no certainty that Harry Taylor will be fit to play.

Michael Hibberd will miss this match for Melbourne after injuring his quad at training this week.

Injury watch: The Dees co-captain Jack Viney is set to miss a month of footy with the foot injury that kept him out earlier in the season, flaring up again.

Prediction: Geelong’s ruck woes could be a huge factor in this game as they will have to shut down the huge presence that is Max Gawn. They are still tough to beat down at the Cattery regardless of what the team sheets look like. Geelong by seven points

Team news: Blues ruckman Matthew Kreuzer suffered a heart scare last week and it is unknown whether the will be okay to take on the Hawks. Jed Lamb will miss due to suspension.

Hawthorn will be without swingman James Sicily for the next six weeks who has broke his wrist.

Injury watch: Hawthorn could have Grant Birchall and Shaun Burgoyne back in the next couple of weeks and if they make finals, Ben McEvoy could also feature.

Prediction: You’d probably pick the Carlton AFLW team to be the men’s AFL team at the moment. Hawthorn by 32 points

Team news: Big news at the Eagles this week as they confirm Nic Naitanui has sustained his second ACL injury and will undergo a knee reconstruction that will see him miss the rest of this year and most of next year.

The Bulldogs should have Hayden Crozier and Tom Boyd back into the team this weekend.

Injury watch: This week the Bulldogs confirmed the Liam Picken will not play this year after suffering from serious concussion problems.

Prediction: The Eagles need to keep the ball rolling to secure the second spot on the ladder. West Coast by 33 points

Team news: Port Adelaide lose ruckman Paddy Ryder again this year who has injured his hip flexor and Robbie Gray will need to pass concussion tests to be declared fit to take on the Giants.

The Giants should have Brett Deledio back into the team this weekend.

Injury watch: GWS are hopeful of having Matt de Boer back into the team in two to three weeks’ time.

Prediction: A big clash between two in-form clubs vying for finals. Port Adelaide will want to bounce back from the shock loss to Fremantle last weekend to keep their top four chances alive. Port Adelaide by eight points

GWS. Many thought the season was done and dusted for the Giants after about round 10. And then their star forward Jeremy Cameron got handed a lengthy suspension and people really thought their finals chances were gone.

Since their loss to Essendon in round 10, they have won five of their last six matches with the only loss being to West Coast in Perth. They managed to beat the reigning premiers who had only lost three times for the year before that game.

GWS have gotten Josh Kelly and Toby Greene back into the team and Brett Deledio is likely to return this weekend, while Cameron is only a couple of weeks away.

They currently sit seventh on the ladder with a healthy percentage but this weekend they must face an undermanned Port Adelaide side at the Adelaide Oval. It is a must win to prove that they are still a threat in 2018.

On the 1st of July, 45,580 fans flocked to Etihad Stadium and saw one of the highest scoring and most entertaining games of footy between Essendon and North Melbourne.

The quarter-time and half-time scores broke a bunch of records and people left the match questioning whether there really is anything wrong with where the game is at right now.

There have been trials of zones and starting positions and the public are yet to see how that looked, but the AFL seems very keen to introduce these new rules to create a faster and less congested game.

Rule changes might work but AFL coaches are very smart people and those who coach in favour of defence, are every chance to work around the new rules and still find a way to hold up ball movement and create congestion.

Photo of the week: