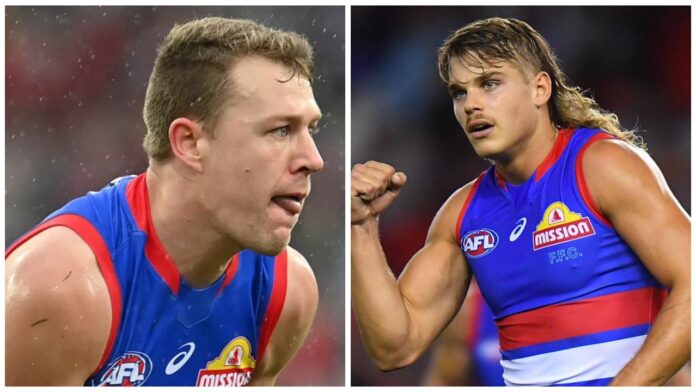 Following their side's pair of hefty prelim' wins, a raft of Demons and Dogs up the table for this season's Gary Ayres Award handed to the best player across the finals series.

However, after backing up his perfect 10 votes with a near-on nine in the rout of Port Adelaide, Western Bulldogs midfielder Jack Macrae is still leading the pack for the prize.

Macrae's 36 disposals and four clearances against the sparkless Power was enough to see him gain top billing on Saturday night, yet the 2016 premiership player was forced to share the podium with his flamboyant teammate, Bailey Smith.

The mulleted maestro added to his eight votes gained against Brisbane with a set of nine nods from both coaches after slotting four majors and finding the Sherrin 23 times.

It's hard to believe Bailey Smith is putting in performances like these at just 20 years old.

The pair currently occupy the gold and silver slots in the count heading into the Grand Final on Saturday week and remain the only players mathematically able to claim the prize.

Bulldogs have Gary Ayres Award sewn up, with Jack Macrae having a convincing lead heading into the GF pic.twitter.com/vLOckghZdJ

The connection in this group is real ❤️ pic.twitter.com/0o0TcSosTH

Following the Demons' demolition of the hapless Cats on Friday night, skipper Max Gawn was predictably awarded a perfect set of 10 votes after snagging five-goals and recording 33 hitouts in an 83-point victory.

That was a mind blowing performance!

The fleet of midfielders beneath the bearded ruckman's feet also featured, with the efforts of Christian Petracca (6), Clayton Oliver (4) and Jack Viney (3) catching both Simon Goodwin and Chris Scott's eye.

Half-back flanker Christian Salem and small-forward Kysiah Pickett capped off the one-sided affair with six and and one vote(s) respectively.

"It was pretty incredible." 🙌

Salo reflects post-match on the side's emphatic win over the Cats.

The award will be decided in the wake of the decider, but unless Macrae goes missing on Grand Final night, the 27-year-old's body of work across the last month should see him salute ahead of Smith.