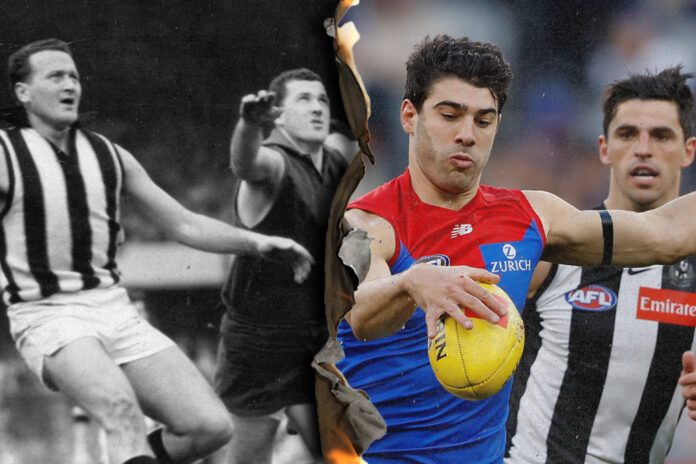 For many fans born after Collingwood’s drought-breaking 1990 premiership, the notion that the Magpies and Demons were once embroiled in football’s fiercest rivalry will provide more confusion than recent adjustments to the high-tackle laws.

But if you turn the clock’s hands back to the middle of the last century, flick through the yellowing annals or tune in to the tales spun by your grandpa, heady scenes from heated battles begin to stoke the senses.

As six of Melbourne’s 13 flags came at the expense of their blue-collar neighbours, even though the results rarely ran two ways on the game's grandest stage, the loathing and malice were far from one-sided.

But with the white-collared Dees and rough and tumble Pies not meeting in September since 1989, the flames have been dimmed to near extinguishment.

Aside from their annual Big Freeze fixtures, bouts between these poles-apart clubs have been far from the main event on any card of late. Run the numbers and only nine of the combatant’s meetings since their elimination final date have been decided by two goals or less, with the average margin sitting above six goals and change.

With Melbourne’s rare peaks wedged snuggly between the Pies’ intermittent, yet raucous, spikes, the clubs with almost three centuries of collective history have been recent ships in the night when it comes to hoisting flags and toasting silverware.

Still, with the pair set to meet on Friday night in a clash that holds real ramifications for more than those clad in red, blue, black and white, could this latest fixture act as kindling to see the bonfire roar once more?

After snapping a flagless streak that stretched back to Robert Menzies’ days on Capital Hill, the fact that Melbourne has retained their place in the four this year is unlikely to have vexed many minds.

But after clearing almost every seat in both their boardroom and coaches box, Collingwood’s phoenix rise from 17th to their current perch on the ladder’s third rung has not only caught attention but had feathers aflutter too.

In a vacuum, the duo’s upcoming date has the ability to shape the top-four prospects of a multitude of chasers, whilst also delivering the Demons an opportunity to dish up revenge for their Queen’s Birthday defeat in mid-June.

Set the lens wider, and the competing fabrics of both clubs have readied themselves to rub, with Collingwood’s colloquial blue denim and the Dees’ white lace enough to spark a dormant class war.

Since their formation over a drip tray in the midst of a depression, the Collingwood Football Club quickly came to embody the gritty streets of their suburb. Like their members and workforce that punched the clock at the tanneries that lined Victoria Park, the Pies showed themselves to be tough, uncompromising, calloused and proudly Catholic.

Down Hoddle Street, or into the leafy groves of the eastern suburbs, the gentry ruling or representing the Melbourne Football Club had their necks tied with stethoscopes, their backsides on protestant pews and their lives in homes likely crafted by the hands of Collingwood fans.

Though these clashing ideologies and differing levels of dirt caught beneath fingernails have come to mean much less as the club bases and society have evolved, both outfits haven’t completely shed their stereotypical DNAS.

In the case of Collingwood, stern efforts have been employed to entrench it, even if flocks of their barrackers a shouting have deeper pockets than most. While a stab pass down Swan Street, jibes and thinning truths regarding butlers, ski trips, Range Rovers and Tweed jackets have long been part of the furniture.

Yet while there may be plenty of Demon diehards that dig ditches for a living, one-eyed Pies that hold sway in billion-dollar deals and two sets of playing groups that aren’t asked to graft outside of AFLPA-approved hours, the ingrained identities of our two sets of sides may now be mythological, but they are still bought and consumed as truth.

But why when all reasonable evidence points to the contrary?

Put simply, it is only human to crave drama. And with many of the world’s greatest rivalries relying upon propped-up chronicles or furrowing morality plays, the timeless battle between the supposedly rich and the comparatively poor is one that needs little introduction to anyone.

Still, the sternest of rivalries need more than just ideological tugs of war. They require stylistic differences in the pot. The pinch of sugar in a bitter bouillabaisse if you will.

By September of 1958, just two years after the world set their eyes on Melbourne for the Games of the XVI Olympiad, there were no fiercer rivals, or fearsome foes, than Norm Smith’s Demons and Phonse Kyne’s Magpies.

Throughout the previous six seasons, the custodians of the Melbourne Cricket Ground and Victoria Park had played off in every grand final with the former proving premiers in 1955, ‘56 and ‘57.

With Melbourne on the precipice of matching the unrivalled four-peat feats met out by Collingwood’s ‘Machine’ during the late 20s and early 30s, the oft vanquished Pies pulled out all stops, targeting the man before the ball to preserve, and make, history.

While entering the clash without their captain, Frank Tuck, and the skillset of Bill Twomey, Kyne’s conventicle was at mammoth odds to cause a boilover. And as the Dees skipped out to a 17-point lead at quarter-time, the cue looked in the rack for another year.

But off the back of a steadfast backline, the negating role of Barry ‘Hooker’ Harrison on Ron Barassi and the forthright leadership of Murray Weideman, the working-class underdogs had their day, leading Smith to pay his begrudging respect as the tops flew off the celebratory stubbies.

"I hate you bastards,” Smith uttered in the Pies’ rooms post-game, “but, by God, I admire you.”

Now nearly 64 years on from this famous slog in the wet, the stage has been set for another battle of consequence on the cricket ground’s greasy deck. But while Barassi, Smith, Kyne or even a Weideman won’t be out there when leather meets sod, the recent exchange of designs only adds intrigue to the 242nd meeting between the duelling duo.

With grit once the Magpies M.O. and finesse Melbourne’s, the tables have turned of late, as evidenced by the silk on display by Nick Daicos in the face of the Demons’ workmanlike midfield and regimented defence.

The recent reprisal of ruthlessness by Simon Goodwin’s side has also acted as a stylistic antonym to ‘Fly’ McRae’s Pies, who have been keen to rebound, change angles and make use of the corridor. And with this run-and-gun style labelled as “all duck and no dinner” by Demons’ dasher Ed Langdon, a petrol-soaked log has been lobbed onto the once dying flames.

Though Langdon’s inflammatory analysis has been enough to send members of the Magpie Army in one hell of a hullabaloo, the fervor whipped is unlikely to see record masses flood into the MCG as they did in Round 10, 1958.

However, as the owner of a whippet frame, silver tongue and private education, Langdon’s pre-bout remarks are certain to have left old-school Maggies griping before their tools are downed and their sights turned to the fight under lights.

Nevertheless, as the barbs have been traded and the battle lines re-drawn, the first meaningful fixture between these two sides in 12,019 days is sure to have all and sundry enthralled, not least the likes of fellow top-four aspirants Geelong, Sydney, Brisbane and Fremantle.

Ever since Fitzroy triumphed over Essendon in the inaugural AFL/VFL Grand Final some 124 years ago, no two teams have met in more premiership deciders than Melbourne and Collingwood, with the current count sitting at seven.

Though the outcome of a home-and-away fixture in early August has little right shaping who will progress to this season’s final day, as Melbourne is currently defending the cup and their rivals up the road are on a roll, the deeds set to go on show this evening could prove a dress rehearsal for the pair’s first grand final since The Beatles rose to prominence.

In the near six decades since the Pies and Dees last stood toe-to-toe for the ultimate prize, almost every single one of their meetings has come with little consequence, closeness or lustre.

But with another niggle here, a nudge there or a head-high free kick leading to a late winner for you-know-who, the flames of fights from years gone by could soon be enough to evacuate the building.

And as boom budgets from Hollywood have proven of late, audiences love a re-make, just as much as they clearly love an origin story.

So, before August ends and the glow of September invites, take a break from your imported brie or your bangers and mash and allow tonight to whet your appetite for the prospect of something greater than what has been dished up for generations.