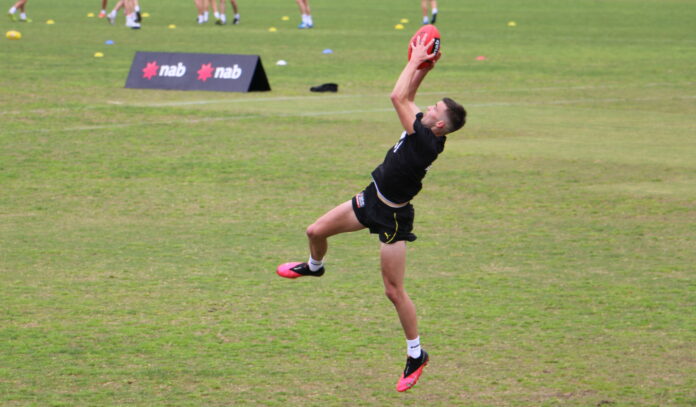 Northern Knights defender Darcy Wilmot is just nine days away from learning which AFL club he will be calling home in 2022.

The explosive defender has gained the attention of recruiters this year following his efforts for the Knights and Vic Metro, being named at back-pocket for the NAB League Boys' Team of the Year.

Touted as a fearless leader in defence, Wilmot is hoping his best football could see him break into the first round of next Wednesday's draft count.

A penetrating right foot that is able to break open lines, Wilmot compares his game to Collingwood defender-turned-midfielder Jack Crisp, having watched the durable utility star for his beloved Magpies.

"I sort of see myself as a Jack Crisp (type)," Wilmot said on Monday.

"The way he can have his impact as a 50-50 defender, can be a lockdown player or be more attacking and good skill execution coming from defence."

Wilmot's late father Grant played five games for Magpies in 1980, with the dream of pulling on the black and white stripes to follow in his dad's footsteps potentially becoming a reality.

The Knights star revealed he has held discussions with Collingwood ahead of the National Draft, however with his stocks rising as a likely early-second round selection, the Holden Centre is unlikely to be the teenager's new home.

While Wilmot would love to represent the Magpies, the hard-nosed backman revealed he would be elated to join any AFL club.

"Dad played for the Magpies back in the day," Wilmot said when asked on his Magpies favouritism." I'm happy to play anywhere, I don't really mind where I go," he said.

"It's your whole life's work to have this moment.

"To have this opportunity to do what you love to do and make a career out of it means everything to me."

The 17-year-old's skills were on display at Trevor Barker Oval as members of the Vic Metro squad underwent a light training session on Monday.

Scouts from all 18 clubs were in attendance, with Wilmot sure to be hoping he impressed any important witnesses.

The dashing defender will learn his fate next week, with first-round selections to be named on November 24, with the following rounds taking place the next night.