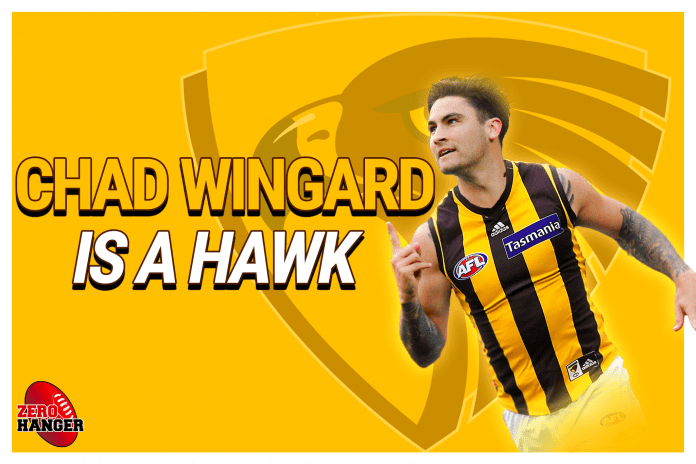 Hawthorn have secured Chad Wingard in a three-way deal that will see the Brisbane Lions trade Sam Mayes and pick 5 to Port Adelaide for pick 6, 35 and a future third round selection.

Wingard's move to the Hawks will send Ryan Burton and pick 15, 35 and a future third round selection to the Power.

The Lions have also traded Sam Mayes and and pick 5 to the Power for pick 6, 35 and a future third round selection.

Hawthorn has traded Ryan Burton, Rd 1 (15), Rd 2 (35) & its Future Rd 4 Selection (on traded from W.Bulldogs) to Port Adelaide for Chad Wingard and its Future Rd 3 Selection.

Pick 6 will likely be used by the Lions to secure Lachie Neal from Fremantle.

Burton yesterday agreed to join the Power on a four-year-deal, despite being 'shocked' when reports emerged the Hawks had offered him to the Power in exchange for Wingard.

The 21-year-old played 47 games for the Hawks since being selected with pick 19 in the 2015 National Draft.

Wingard took to Instagram to thank Port Adelaide for the opportunity to play at the top level.

First of all just want to thank the port Adelaide football club for the opportunity to play at the highest level when they drafted me in 2011. Has been quite the journey and have enjoyed all the highs and lows with the boys. Thank you to the fans who have been there since day one and supported myself and my family through it all, massive thanks to chokito in Perth who always took my family in on there trips to WA. To all the volunteers, staff, coaches and players at port: just want to say a massive thank you and I appreciate everything you’ve done for myself and the club. My family have been through a lot over the last month and I appreciate all the support from fans and friends who helped us through this time. To the fans, I have always loved you guys, and wish nothing but the best for the boys in the future. But I’m also excited to start my new journey and taking on another challenge. Thank you for the memories port Adelaide I leave with the greatest memories and appreciation of everything you’ve done for me and my family :). Love you guys

Selected with pick 6 in the 2011 National Draft, Wingard played 147 games and kicked 232 goals for the Power.

Selected with pick 8 in the 2012 National Draft, Sam Mayes departs Brisbane to be closer to family.

The 24-year-old played 101 games for the Lions in six seasons at the club.

Brisbane General Manager of Football David Noble thanked Mayes for his commitment to the club.

“We would like to thank Sam for his efforts and contributions over the years at our Club,” Noble told the Lions website.

“During a challenging period at the Club Sam stood up, continued playing with the Lions and we are grateful for his loyalty.