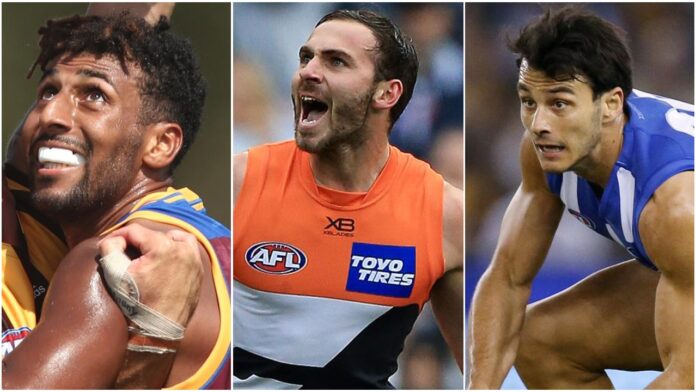 It was another frantic week in the AFL trade circles, with more clubs officially entering their off-season and are beginning to re-shape their lists for 2022.

The Swans, Tigers, Cats and Power were among the mix of clubs in the headlines over the past week in what has been a busy period of trade and free agency news and rumours.

Edmund tweeted on Saturday afternoon that the veteran had chosen to walk from his home of 12-seasons and straight into Richmond's back-six, as is his right as an unrestricted free agent.

Collingwood onballer Brayden Sier is understood to be on the lookout for a new club this off-season, according to The Herald Sun.

Sier is among an extensive list of Magpies players yet to recommit to the club for 2022, with Collingwood reportedly unlikely to offer the 23-year-old a new deal.

The Banyule product has played 28 games in black and white, having been limited to no more than seven appearances in each of his past three seasons due to injury and form.

Geelong youngster Jordan Clark has reportedly met with Fremantle as he continues to weigh up his options for the future.

As reported by Fox Footy's Tom Morris, Clark is understood to have held discussions with Dockers coach Justin Longmuir, with a move back to his home state of Western Australia seen as a likely outcome for the 20-year-old.

Fremantle have been closely linked to Clark's signature across the course of this season, with the Claremont product being limited to just the 11 matches in 2021, three of which coming as an unused medical sub.

West Coast have reportedly decided not to offer a new deal to midfielder Jarrod Brander for the 2022 season.

According to 7 News Perth's Ryan Daniels, Brander is likely to make a move east, with a return to Victoria potentially on the cards.

The 22-year-old's departure is a likely outcome of the Eagles' tight salary cap situation, which has placed a number of key players without deals for next year.

St Kilda are the latest club to be linked to out-of-contract Cat Nathan Kreuger ahead of the off-season.

According to The Age's Peter Ryan, the Saints have joined Collingwood in expressing some level of interest in the 22-year-old swingman.

Kreuger made his AFL debut in Round 20 this year, featuring against North Melbourne before lining up against the Giants the following week in what would be his last appearance for the season.

Saint turns back on free agency

Jack Billings has turned his back on free agency and signed a new four-year deal with the Saints.

The classy left-footer was joined in re-signing by Paddy Ryder who signed a one-year extension.

St Kilda coach Brett Ratten confirmed the news on SEN Breakfast. Ratten said Billings had become a real leader in his time at Moorabbin and deserved the long-term deal.

Interstate move on cards for Chol

Mabior Chol is set for a move up north to the Gold Coast with his time at Richmond seemingly coming to an end.

Chol is out of contract at the end of the season and is keen to play senior football now. With Richmond having re-signed Jack Riewoldt for another year and Ivan Soldo set to return from a knee injury, those opportunities may not come at Richmond.

FULL STORY: Chol destined to link up with Suns

The Brisbane Lions have confirmed that Archie Smith will depart the club after eight years and just 16 games.

Smith was a talented junior basketballer, the son of former NBA player Andre Moore, and was scouted by AFL recruiters at 17.

He eventually joined the Lions, going on to win three premierships with the club's NEAFL side.

North Melbourne could be ready to swoop on Richmond tall Callum Coleman-Jones this off-season, with a deal worth north of $2 million and first-string ruck duties being key factors in potentially luring the 22-year-old away from Punt Road.

According to Fox Sports' Tom Morris, the Kangaroos - along with the Suns - are likely to have a five-year deal tabled to the ruck/forward utility, with an exit from the Tigers now looking likely.

It is understood that Coleman-Jones is keen to play more minutes in the ruck, with North Melbourne potentially seeing the young tall as a formidable successor to veteran Todd Goldstein.

Greater Western Sydney forward Jeremy Finlayson is understood to have undergone a medical with Port Adelaide, per reporter Tom Browne.

The news comes as quite a shock for both Giants and Power fans, with Finlayson's having signed a new three-year deal with GWS last year.

The Giants spearhead's name hasn't emerged in known discussions previously in the build-up to this off-season either, certainly catching AFL fans off-guard.

Port confirm interest in Swan, defender to remain in SA

Dawson, 24, requested a trade home to South Australia last week as the Swans and midfielder couldn't see eye-to-eye on a new deal amid the club's strained financial flexibility.

Out-of-favour defender Tom Clurey is set to remain at the club next season despite facing a tough battle to retain his place in Ken Hinkley's defence.

Melbourne forward Jake Melksham is reportedly open to a move at the end of the season despite being contracted until the end of 2022.

Melksham has found himself out of the Demons best-22 this season and may be keen to head somewhere where he his more of a chance to play senior football.

The Eagles are set to re-sign veterans Josh Kennedy and Shannon Hurn as well as Jack Redden on a trio of one-year deals.

However, due to salary cap pressure, those deals will all be on reduced rates to what the three have usually come to expect.

Geelong midfielder Quinton Narkle is nearing a decision to recommit to the Cats for the 2022 season, amid speculation of a move due to a lack of opportunity.

Ralph Carr, Narkle's agent, told SEN.com.au that he is hopeful of an imminent agreement between the two sides.

Wantaway Swan Jordan Dawson is understood to have toured the Crows' training facilities this week as he weighs up a move back to South Australia.

The Robe product requested a trade back to his home state last Friday, with the Swans and their gun midfielder unable to find agreed terms on a new deal past 2021.

The Power and Crows are both keen on luring the 24-year-old to their respective clubs, with Adelaide getting the "first crack" at Dawson after the utility toured West Lakes.

Hawks star Tom Mitchell has laughed off any speculation surrounding his future at Hawthorn.

Mitchell, who claimed his third Peter Crimmins Medal on Thursday, has had his name linked to a potential move away from the Hawks this season, with the club undergoing a rebuild and coaching handover.

The conjecture on Mitchell's future suggested there was belief the Hawks could be tempted to part ways with the Brownlow medallist in order to strengthen their draft hand and youthful stocks.

Axed Port Adelaide midfielder Hamish Hartlett has revealed he has reached out to the Gold Coast Suns in hope of landing an AFL lifeline.

The 31-year-old was delisted by the Power earlier this week after 193 games with the club, first making his debut in 2009.

Swans quartet Dylan Stephens, Hayden McLean, Robbie Fox and Will Gould have all signed new deals to remain in the Harbour City, while Kaiden Brand, Sam Gray, Matthew Ling and Malachy Carruthers have not been offered contracts for 2022.

Stephens, a former top five pick for the Swans, is a major retention for John Longmire, with the young midfielder having been closely linked to a move to either South Australia or Victoria.

The 20-year-old has inked a new deal that will see him secured to Sydney for a further two seasons.