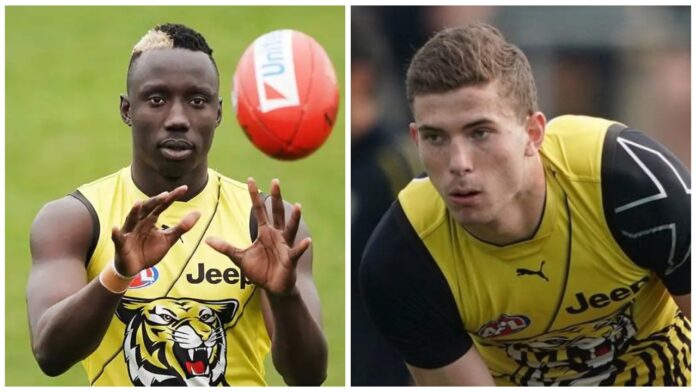 Tall Tigers Callum Coleman-Jones and Mabior Chol are reportedly weighing up whether to end their tenures at Punt Road.

With the likely return of Ivan Soldo by Round 1, as well as the fact that Toby Nankervis is certain to remain on Richmond's list, the pair of rucking forwards could well see their playing time dry up next season.

According to reports from The Age, Coleman-Jones is deliberating whether to join North Melbourne or Gold Coast for the 2022 season, with both rival clubs having signalled their interest in signing the 22-year-old.

As the Suns hold an array of picks that would likely pique the Tigers' interest, the Carrara based side appear the clubhouse leaders to land the Sturt product's services.

The South Australian is expected to make a final decision on his playing future within the next week.

Coleman-Jones was originally selected with the 20th pick of the 2017 draft and lined up for Damien Hardwick's side on eight occasions this season for a return of 11.4 in front of goal and a mean of 7.6 hitouts per week.

Given that his six-season stint at Tigerland began on the rookie list, Chol has met the markers required to earn unrestricted free-agent status.

Like Coleman-Jones, Chol is also being chased by the Roos, but could also land at Essendon should he agree to the terms the Bombers have reportedly offered him.

Richmond could be in line for a compensation selection should either of these club's offers for the 24-year-old exceed certain financial indicators.

Despite it appearing likely that Richmond's depth will take another hit this off-season with the aforesaid pair likely to prefer posts with greater job security, SEN pundit Kane Cornes is of the belief that Chol's versatility is enough to make him a required name on Hardwick's whiteboard.

“The player that can play forward like Chol can but also ruck, every team wants one,” the former Port Adelaide games record holder said on AFL Nation.

“A lot of teams aren’t prepared to play two rucks but they need their ruck to have a rest, so if you can rest forward and be equally as effective there, it’s just so valuable.

“I think Coleman-Jones has a bigger future in holding down a key position but Chol, for that versatility that he gives you, is vital.”