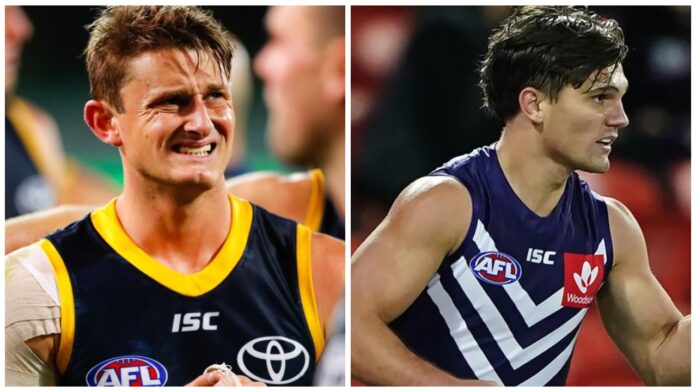 Sam McClure and Daniel Cherny of The Age have reported that the Crows are showing a willingness to let them walk out of the club.

The duo are currently in the final year of their contract but are yet to play a game this season through injury.

Crouch has been long been linked to a move back to Victoria, with talk only heating up since the departure of brother Brad Crouch.

The 26-year-old has been a ball magnet over his time at Adelaide. In 2017, Crouch had the most disposals in the league, earning him best-and-fairest and All-Australian honours.

A groin injury has cruelled Crouch's 2021 season but the club is hopeful he can make a return in coming weeks.

Talia has been a mainstay in defence during his 11-seasons at the Crows and celebrated his 200th game in Round 18 last year.

The 29-year-old is a two-time All-Australian and a best-and-fairest winner, and is considered one of the most reliable defenders in the AFL.

Due to Crouch's injury history and Talia's age, they're both expected to worth approximately second-round picks.

Adelaide coach Matthew Nicks spoke on their contract situation back in June.

“I am not going to come out and say they have to play football [this season] for them to be at this footy club going forward, that’s not the case,” Nicks said.

“But it is factored into the conversation at this point.”

Former Saint and current Crow, Tom Lynch could also be on the outer at West Lakes.

Schultz went undrafted as an 18-year-old but, after two impressive seasons in the VFL, was taken with pick 58 by Freo in 2018.

The youngster has since become a regular in Justin Longmuir's side, playing all but one game over the last two years.

Shultz qualifies as an unrestricted free-agent after Fremantle downgraded him last year. Following special provisions to help teams cope with list sizes, Fremantle delisted the forward before moving him onto their rookie list.

The possibility of acquiring Shultz for free has spiked the interest of Hawthorn.

Shultz, who has managed 17 goals in 2021, would offer the Hawks some much need goal-kicking.

With Luke Breust past 30 and Paul Puopolo's retirement, Hawthorn are desperate to add some potency up forward.

The young Docker would be a handy addition alongside fellow small Dylan Moore who has impressed in his third season at the Hawks.