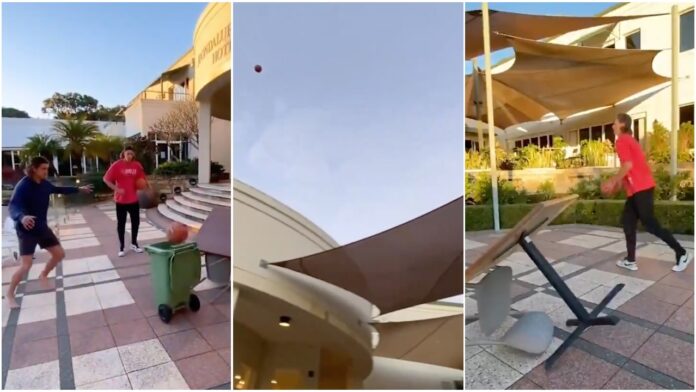 It seems the Brisbane Lions are making the most of their stay in Western Australia.

The players are currently residing at the Joondalup Resort in Perth since flying into the state and undergoing directions of the WA Government.

Cooped at their temporary new homes ahead of their clash with Fremantle on Sunday, a number of players look to have sparked some friendly competition in the form of basketball trick shots.

Berry brothers Jarrod and Tom, former Brisbane Bullet-turned-Lions forward Tom Fullarton and veteran Daniel Rich were among the players showing off their skills and watching on in rivalry.

Using equipment and the settings surrounding them at the resort, the Lions were able land some stunning trick shots worthy of famous Youtube group Dude Perfect.

Who did it better? 🤯

The Lions will be hoping to pull off some similar success on Sunday, as they look to return to the winners list following their poor Round 20 showing against the Hawks.

Currently placed in sixth spot on the ladder, a win could see the Lions move a spot higher and potentially land a top four placing.

The Lions will face Fremantle at Optus Stadium on Sunday at 5:10pm AEST.