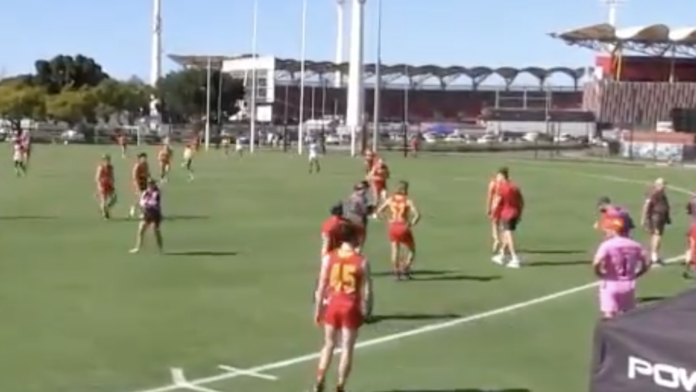 A VFL match between the Gold Coast Suns Reserves and the Southport Sharks came to an abrupt end in it's opening quarter on Saturday.

The game was underway at the Suns' training facilities at 10:30am, with the Queensland Government announcing within the hour that professional sport would be cancelled as part of the state's snap three-day lockdown.

With both sides battling for premiership points after a chaotic season to-date, the topsy-turvy 2021 VFL season took a further twist.

The Suns led the Sharks 8-6 before a premature siren ended the match under the directions of the state government.

Here's the moment the VFL Suns vs Southport Sharks match was suddenly cancelled 10mins into the 1st quarter, due to snap lockdown announcement. pic.twitter.com/6UV05RJJ2B

Southport were looking to continue their impressive campaign, aiming to add a 10th win of their season as they sit at the summit of the second-tier competition.

The Suns currently sit just outside the finals picture after 11 matches, with several clubs still yet to play their ninth game following multiple postponements.

The Suns/Sharks clash was one of three matches scheduled for Saturday in Queensland, with clashes between Aspley/Essendon and Brisbane/Sydney also being cancelled.

The three-day lockdown in South-East Queensland has caused plenty of issues for the AFL, NRL and Super Netball.

The AFL are currently working to reschedule three postponed matches from this weekend.