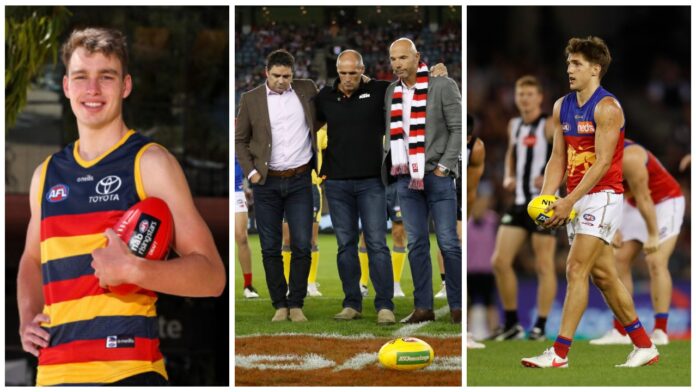 After a disrupted and often chaotic 2020 season, the opening eight rounds of 2021 have given us some kind of footy normalcy.

There's been injuries, umpiring controversies and last minute venue switches, but 2021 has given us some pretty good moments too.

After a crushing final few minutes in Round 2 where Zac Bailey should have had the opportunity to kick the winning goal for Brisbane after his tackle on Geelong’s Mark Blicavs, the young Lion finally got his moment.

Brisbane came from 25 points down midway through the second quarter against the Pies, with a missed set shot from Hugh McCluggage levelling the scores in the final term. A late Josh Daicos goal gave the Pies the advantage, before Bailey stepped up from 45 metres out as the siren sounded and delivered the Lions a much needed four points.

It was heartbreak for Collingwood fans and utter elation for Brisbane. For Bailey, it was redemption and a reminder that the footy gods always have a plan.

Josh Bruce’s first season at the Bulldogs in 2020 was considered underwhelming by many, but in 2021, the key forward has seemingly re-found the form that made him St Kilda’s leading goal kicker in 2015.

Round 3 saw Bruce bag a career-best 10 goals against North Melbourne, becoming the first player since Ben Brown in 2019 to do so and the first Bulldog since Simon Beasley in 1987.

While a 10-goal haul against the last placed Kangaroos in a 128-point victory may not have the 28-year-old in contention for the best forward in the competition (although it does place him third in the Coleman after 8 rounds), it sure was exciting for fans to see a key forward dominating once again.

Hearing the ‘Bruce’ chant ring out around Marvel Stadium every time the forward approached the ball in the late stages of the game was also a nice touch. After a footy starved 2020, it’s good to see Melbourne-based fans getting to have some genuine fun again this season.

St Kilda's Round 2 clash against Melbourne was renamed 'Spud's Game', a tribute to the late Saints great Danny Frawley. Saints players wore the famous No.2 and 'Spud' on their tops during their pre-game warmup, while the traditional Lloyd end of Marvel Stadium was replaced with Frawley for the Saturday night game.

The fixture was a special moment for all involved, but what happened just prior to the bounce was one of the more touching moments of the season so far. The scheduled kick-off time of 7:25 was delayed by two minutes.

Instead, players from both teams joined in the centre circle with Frawley's close friends Garry Lyon, Stewart Loewe and Tony Lockett talking about Frawley's legacy. Lyon urged people to spend the two minutes checking up on their mates.

“Whether you’re sitting here in the stands or at home watching on the television, it’s a time to talk,” Lyon said.

“If you’ve got an issue at home, if you’ve got a problem, if you think there’s something that needs to be said, we are encouraging tonight to talk – and that’s what Spud would’ve wanted you to do."

While the match didn't go to plan for the Saints, losing to the Dees by 18 points, the night itself and the message it sent was one of the most important of the season.

Tonight's game has been delayed to give everyone the time to reach out and check in with your mates.

During the delay we heard from two of Spud's great mates, Garry Lyon and Stewart Loewe. #AFLSaintsDees pic.twitter.com/Q68C36DSTq

After a pretty bleak 2020 season in Melbourne, starting with no fans at games to no games at all, seeing a packed MCG on ANZAC Day was a highlight for footy fans around Victoria and the country.

The first bounce of the season at the MCG in Round 1 in front of a Melbourne crowd for the first time in over a year was a special moment. But the ANZAC crowd, the biggest at any sporting event since the pandemic began, made it feel like the AFL had finally made it through one of the biggest challenges the league has faced.

Although the sides were sitting 15th and 16th on the ladder before the match, Essendon and Collingwood fans ensured that the MCG was filled with a footy-loving atmosphere not seen since the 2019 Grand Final. The roar after the national anthem was surely the biggest since 2019 too.

In the end, it was a 24-point win for Essendon, and a bigger win for the game.

The biggest attendance at a global sporting event since the start of the COVID-19 pandemic.#AFLPiesDons pic.twitter.com/ABrZharzdm

Not only did Lachie Jones make his AFL debut on his 19th birthday, and face Brownlow medallist Dustin Martin in the process, the Port youngster managed to achieve a feat some players never come close to: cult hero status.

The backman, born in a small farming town in South Australia, was met with a loud roar as he ran on the ground for the first time in Port's Round 4 win over Richmond.

Asked by reporters after the win about the roaring reception he received, Jones was honest on why he thought he had obtained such a reaction.

Not only was the Power youngster a fan favourite on Australian social media, the 19-year-old even made a splash overseas, with Port's TikTok video on Jones' debut going viral, amassing close to 500,000 views and 93,000 likes. Of the over 2000 comments on the video, many are confused Americans with a newfound interest in the game, and Jones.

"Wait what sport is this? I will buy a subscription. TELL ME!!" one comment said, while another read: "suddenly I'm interested in whatever sport this is"

Long in the back. Shaved in the sides 🥰 #afl #weareportadelaide #mullet #mulletszn

While Jones is unfortunately on the sidelines after suffering an ankle injury in Port's Round 5 win over Carlton, Power fans, TikTok users and the AFL's marketing department are all surely eagerly awaiting his return.

After a forgettable first few minutes on an AFL field, in which Riley Thilthorpe's first kick in the game went straight into the man on the mark and resulted in a rebound goal, the Crows' prized No.2 draft pick proved his worth.

In one of the craziest games of the season, which saw the Crows kick a remarkable 16.0 to start the game, Thilthorpe steadied after a shaky start and kicked 5.0 from 16 disposals and five marks. The 18-year-old became the only Crows player to kick five majors on debut.

“We are seeing something here – the emergence of a future star,” Hawks legend Jason Dunstall said on Fox Footy, while three-time premiership Lion Jonathan Brown added his own praise.

“The hardest thing as a young key forward to do is take a big contested mark … I love his positioning." Brown said.

The Crows pick up where they left off 💥

Adelaide ended up going down by three points in a thrilling finish, with the Hawks' young gun Jacob Koschitzke kicking his own bag of five goals to help his team come back from a 32-point deficit in the third quarter.

Remarkably, Hawthorn also came from 39 points down to win in their Round 1 clash against Essendon, a slightly concerning trend for Hawks fans, but an entertaining one for fans of the game.