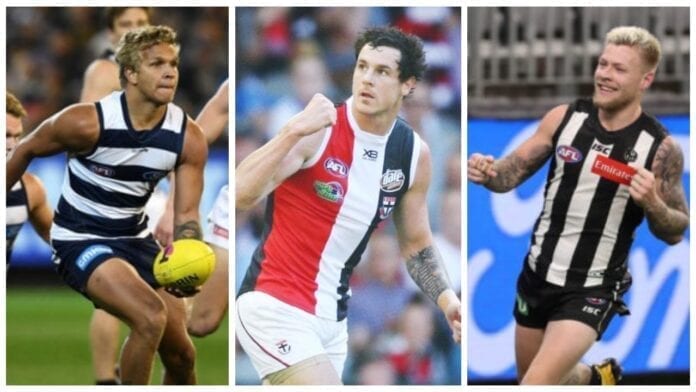 Now that footy is over for the season, the focus turns to the circus that is trade period.

With clubs looking to make deals in quite possibly the most important trade period in recent memory, here are the 10 most interesting out-of-contract players.

Out-of-favour Dee Oscar McDonald by all accounts won’t be at the club come 2021.

The 24-year-old has played 81 games for the club, but hasn’t featured heavily in the side over the past couple of seasons.

According to SEN’s Sam Edmund, the defender is resigned to the fact he will have to leave.

“He will move on,” he said on Whateley.

“Opportunities slim for him at Melbourne, both parties agreeing that a trade will almost likely happen.”

However, there seems no suitors as of current for McDonald, with clubs having to make a trade for him as he isn’t a free agent.

MELBOURNE, AUSTRALIA – APRIL 29: James Harmes of the Demons (left) celebrates with Oscar McDonald of the Demons during the 2018 AFL round six match between the Essendon Bombers and the Melbourne Demons at Etihad Stadium on April 29, 2018 in Melbourne, Australia. (Photo by Adam Trafford/AFL Media)
BackNext