COLL80
ZERO HANGERAustralia's #1 independent AFL news source
More
Home AFL News Team of the Round Team of the Week: Round 19 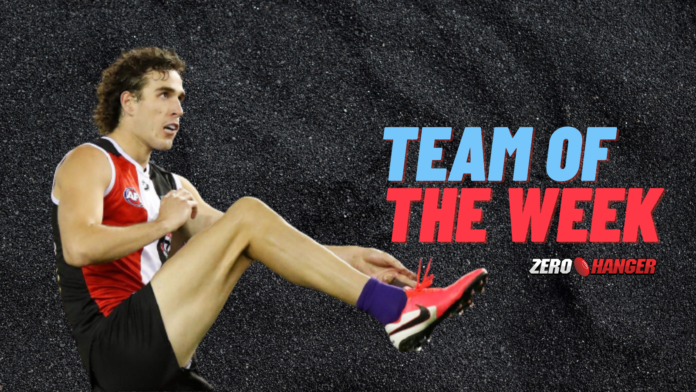 Daniel was instrumental for his side, as the small defender helped generate offense for the Dogs, even managing to hit the scoreboard himself with a goal.

Challenging for the Bulldogs best player behind Bontempelli, Daniel put on a show. He gathered 34 touches, 6 marks, 5 clearances, 9 intercepts, and 6 score involvements.

In another strong performance, Stewart led a Cats defense that held Richmond to only one goal in the first half. This effort set up his side's victory as they built up an insurmountable lead.

Leading all players with 10 intercepts, he also managed 25 disposals, 7 score involvements, 7 rebounds from 50, 9 marks, and 92% disposal efficiency. While previously undervalued, Stewart is close to a lock for an All-Australian spot after a season of stellar play.

The booming left-footer was at it again helping his side down back while propelling his team forward on the rebound.

Ending with 29 touches, he also had 671 metres gained, 6 marks, 8 intercepts, 6 score involvements and disposed of the ball with 80% efficiency.

Lloyd was once again a reliable defender who manages to generate opportunities for his side coming out of defence. His efficiency (87.5%) while collecting plenty of the ball gave his side excellent use ensuring that the Swans could keep control of possession.

Finishing with 32 touches, he also had 5 intercepts, 4 score involvements, 6 marks and 502 metres gained.

In a disappointing loss for the Bombers, Heppell was one of his team's best trying hard all game. While the Bombers missed an opportunity to hold a top-eight spot, strong Heppell performances will be crucial for the side to challenge for that final spot.

With a team-high 28 disposals, he also finished with 6 marks, 4 tackles, 6 intercepts and 435 metres gained.

Crisp was one of the Magpies best, being one of the main reasons that his side only lost by 28. He was strong in defence, preventing many entries into 50 and keeping Power's forwards at bay.

Jack Crisp (141) starts the round in the best way possible for his owners!#AFLFantasy #AFLPowerPies pic.twitter.com/jBLdbjnuOF