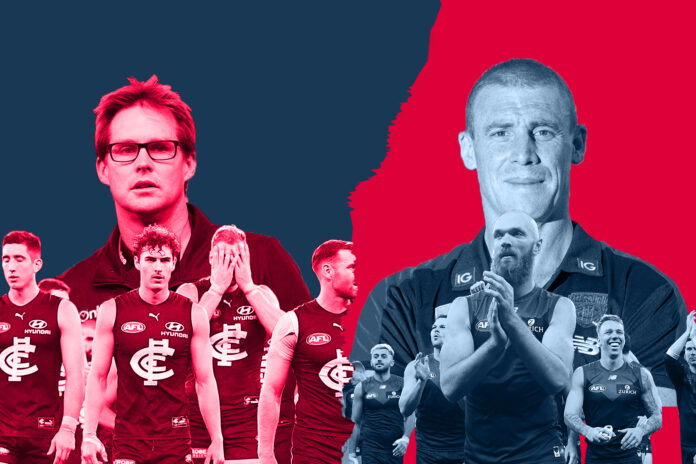 At the completion of the 2020 season, both Melbourne and Carlton missed out on yet another finals campaign, with both clubs stuck around the middle of the ladder.

For the Demons, a ninth-placed finish was the second year in a row they failed to live up to expectations. They fell short in many of the games that really mattered, and it seemed increasingly likely that their 2018 Preliminary Final breakout year was merely an outlier.

Questions were beginning to be asked of coach Simon Goodwin. He was lost for answers in press conferences as to why a talented list on paper couldn't gel on the park.

At Carlton, the 11th-placed finish was a noticeable improvement from the season before it. But for a club starved of finals appearances for nearly two decades, the result would hardly have been of comfort to its weary supporters.

At the time, there were many parallels between the two middle-of-the-road clubs.

Both clubs had finished in the bottom-4 seven times since 2005. Both had question marks over their coaches and high-end talent at the top of their lists. Both needed to show improvement in 2021.

You could be forgiven for putting the two clubs who had seemingly forgotten how to win into the same boat.

But only halfway into the 2021 season, Melbourne and Carlton are like chalk and cheese.

Last Friday, Melbourne cemented themselves as the flag favourites with an ultra-impressive 22-point win over the Brisbane Lions.

Two days later, the Blues all but ended their own AFL Finals hopes with a 22-point defeat to the injury-stricken Eagles.

So, what on earth has happened in the last eight months?

Under his watch, the Demons capitulated under the weight of expectation to finish 17th in 2019, following a Preliminary Final appearance the previous year. Despite what seemed a talented list, they were unable to translate it into free-flowing footy.

The effort was there, but Goodwin's side didn't trust each other.

As the disappointing losses mounted up, the major ball-winners only dug in deeper to try win the game off their own boot, rather than playing the team game required to win in modern footy.

The disconnection within the squad left Goodwin seemingly lost for answers, and it seemed possible that he might only get one more season to prove himself as senior coach.

Now in 2021, it looks as if Goodwin has finally found the answers.

Melbourne has defeated every other top-eight opponent this season and (with a win over Collingwood on Monday) will enter their bye week with a 12-1 record.

The club's leadership has been measured, composed, assured. Melbourne is now beating teams in the coaching box as well on the field.

Inclusions to the coaching staff - such as Mark 'Choco' Williams - have reportedly had a huge effect behind the scenes.

For all that has been said about their turnaround, the one that stands out was the Demons' off-season focus on 'selfless footy.'

The players have repeated this notion time and time again. They no longer try to win games by themselves, but trust their their system, and importantly, their teammates, to drive them towards success.

The result has turned the direction of this club around, and has vindicated Goodwin in his role.

The opposite can be said for the beleaguered David Teague and his men.

At the halfway point of the season, Carlton have failed every challenge asked of them and are 0-7 against sides in the finals positions.

The Blues have failed repeatedly to stop the bleeding on the scoreboard and, unlike Melbourne, haven't shown an identifiable blueprint to win games of footy.

With Nathan Buckley stepping down as Collingwood coach, Teague will now go into the bye under more pressure than other other coach in the league.

The role of senior coach at Carlton has been a poisoned chalice for two decades now. No one has lasted a full six seasons, since David Parkin stepped down in 2000.

After his predecessor, Brendon Bolton, was sacked halfway through the 2019 season, Teague took over as interim coach and has kept the role since.

Due to the rushed process over Teague's appointment, there will be inevitable scrutiny over his credentials unless he can rapidly turn around the club's fortunes.

If you want to know what the difference is at Melbourne this year then you just have to look at their tackle numbers.

Last year they were ranked last for tackles. This year they're ranked first.

In footy, there is perhaps no stronger indicator of a side's hunger and connection than their tackling efforts. Richmond built a premiership dynasty around it.

As for Carlton, in 2020 they ranked 4th for tackles, this year they rank 15th. Right there, that is the ballgame, folks.

In one off-season, Melbourne chose to completely revamp itself defensively.

Christian Petracca stated in a post-game interview two weeks ago that they have focused on 'trusting the tackler'. The tackling ferocity means that they now back their teammates' ability to get the ball out without getting sucked into the contest themselves.

All players now feel a responsibility to help out on defence - the Demons' work rate when they don't have the ball is phenomenal.

Led by stalwarts Steven May and Jake Lever, the Demons are also the #1 intercept team in the competition. Opposition teams can't break through their defensive set-up, and Melbourne make them pay on the rebound.

Their ability to fill the space and be accountable on defence is stifling opposition attacking efforts. Aside from in their solitary loss - against Adelaide - no team has managed to score more than 75-points against Melbourne.

Conversely, defensive alarm bells must be ringing at Ikon Park.

Carlton has conceded 94-points or more, in nine of their 12 games so far, including six times over one hundred.

Throughout Teague's tenure, Carlton has struggled to stop sides from scoring fast and scoring heavily for long periods in games.

The problems are less to do with personnel than they are to do with pressure. The Blues have two of the best intercept defenders in the league in Jacob Weitering and Liam Jones, and their recruits in Adam Saad and Zac Williams both have strong resumes in defence.

The defensive problem isn't just in defense, but all over the ground.

No backline can cope when teams are punishing them so easily up the ground.

The best teams have repeatedly exposed Carlton in this area, and they concede 100+ points per game, to top-eight teams.

There is a distinct lack of urgency on defence and it is leaving them open for scoring opportunities.

For Melbourne, the rock of their impressive rise has been in the engine room.

They are the #1 contested disposal team in the league, and rank 6th for clearances.

Clayton Oliver has stamped himself as a top five midfielder in the comp, and is leading the AFL for contested possessions and stoppage clearances.

Round 12 is in the books and so is our MVP leaderboard!

Christian Petracca has been equally dominant. In 18 months, Petracca has developed into the complete player - he ranks elite in statistics across the board and is close to the game's best player.

Melbourne lead the league for hit-outs, headed by skipper, Max Gawn, who looks destined to earn his 5th All-Australian jacket this year.

Despite the star power, the load is shared across the midfield group. Unsung heroes in James Harmes, Ed Langdon and Angus Brayshaw can all be relied on to pull their weight.

The Demons have also dramatically improved their field kicking, which had plagued them over the previous two seasons.

They get the ball inside-50 the 3rd most of any side, and rank 5th for marks once in there. They have cleaned up how they move forward, which is now putting their opposition under real pressure.

At Carlton, the midfield load has been left to too few and their depth has been exposed.

Sam Walsh has been one of the few shining lights for the Blues this year. He has averaged over 30 disposals per game, showing poise and leadership beyond his young years.

But, worryingly for the Blues, Walsh has been their leading ball-winner in all but two of their games. That is a lot of pressure to put on the shoulders of a kid in just his third year.

You only have to look to skipper, Patrick Cripps, to see the danger in this. Cripps has looked battered and bruised from years of carrying Carlton's midfield on his back, and has struggled to regain some of his impactful best form.

The gap from there widens again. When looking at Carlton's core midfield nucleus for the next decade you'd be hard pressed to find many other names.

Carlton targeted Zac Williams, recruiting him on big money for this exact reason, but after failing to make an impact in the middle, he has been moved back to defence.

This is a midfield crying out for help.

A welcome change for Demons fans has been the potency of their forward line.

Gone are the days of lacking a tall key forward to anchor their offence - in fact they now have too many.

Tom McDonald has been one of the success stories of the season and has turned his career around.

The 28-year-old has built one of the best tanks of any key forward in the game, and does much of his damage at the ground level. He ranks 4th for tackles inside-50 and sits 15th in the Coleman Medal race.

Bayley Fritsch has been simply enormous. He sits 9th in the Coleman race, and has kicked multiple goals on eight different occasions this year.

Kysaiah Pickett has been electrifying, contributing 20 goals himself.

The forward group is humming, they're 2nd in the league for turning inside-50s into scoring opportunities.

At Carlton, the goal kicking tally makes for worrying reading.

Harry McKay has been a lone hand down forward and sits atop the 2021 AFL goalkicking table with 38 goals. The out-of-contract star will be the name Carlton most desperately want signed on the dotted line before the end of the year.

Behind McKay, however, only veteran Eddie Betts has managed more than 10 goals in the first half of the year.

The health of Charlie Curnow will be crucial going forward but the Blues will need to find more creativity in front of goal.

With big money prioritized elsewhere in the salary cap, Carlton's hands are tied at the trade table. The draft may present the most realistic option to surround McKay with more goal kickers.

RELATED: Carey calls for club to make a play for Carlton star

When a week is a long time in football, it is amazing what can happen over the course of a pre-season.

Melbourne supporters don't yet dare to dream, but a chance to finally break the longest drought in footy now seems scarily possible.

But for Carlton, a Melbourne-like effort is all fans can hope for to avoid further suffering.