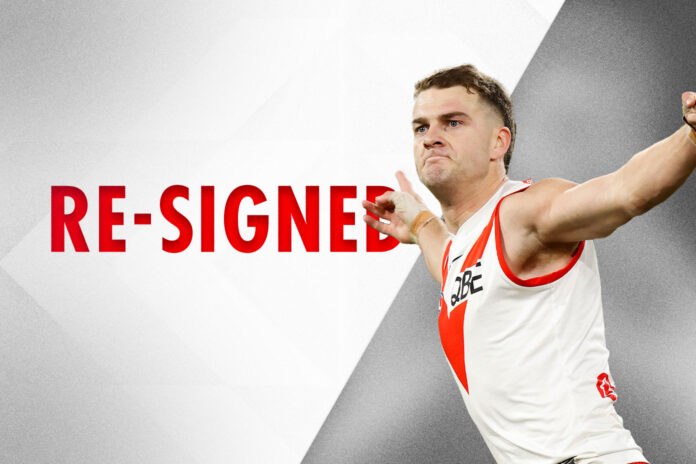 Swans livewire Tom Papley has rejected the chance to enter free agency, instead signing a five-year extension to remain in the Harbour City until the cessation of the 2028 season.

With eight seasons of service to Sydney under his belt, the 26-year-old had met the triggers to become a restricted free agent next season.

Yet, with the pain of last Saturday's grand final demolition still fresh in his mind, Papley committed his future to the Swans on Friday in an effort to go one better in 2023.

Speaking in the wake of entrenched his future with the Bloods, the former Rookie Draftee claimed that his choice to remain in the red and white was a simple one.

“We have a very exciting group coming through, I'm really looking forward to the next five years,” Papley said within a club statement.

“The contract didn't take that long to be honest; it all happened pretty quickly during the finals and got it signed off.”

“One of the main reasons I signed on was because of this young group. They're still learning, and I think only half played in their first final this year, so we can't wait to get back to pre-season and start working hard again.”

Having entered the 2022 season with a question mark over his head following trade speculation in recent seasons, the Gippsland Power product made his mark known, booting 32 goals as the Swans ascended to the last Saturday in September.

Sydney's GM of Football, Charlie Gardiner, professed that while there remained a total buy-in at Moore Park, Papley's enthusiasm was a barometer in this regard.

“We are thrilled that Tom has committed his future to Sydney,” Gardiner said.

“Few players are as invested and committed to seeing their football club succeed as Tom Papley. We all know he is an exceptional player and has well and truly established himself as one of the best small forwards in the competition but equally impressive is his passion and care for the club.

“Tom has enormous respect amongst his teammates and our coaches, and we just love the energy he brings to the team, the way he approaches his football and his drive to improve the team and the players around him. He continues to emerge as a leader of our Club and we're delighted that he will be a part of the Club's long-term future.”

Since debuting during the opening round of the 2016 season, Papley has gone on to make a further 140 appearances for the Swans, slotting 221 goals in the process.

The Victorian earned All-Australian honours in 2021, a campaign that closed after averaging 1.87 goals per game.