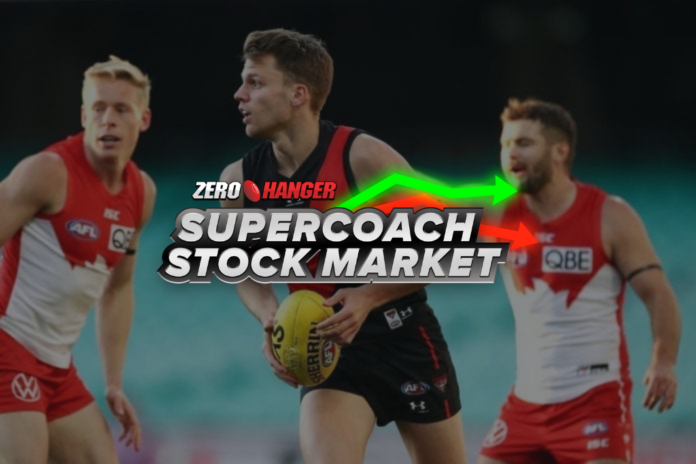 Should you be deprived of one of the many in-form defensive premiums that are on offer and looking to move on a high-priced backman early, Ridley is the obvious answer.

The fifth highest scorer across the competition after the opening two weeks, Ridley's price is set to soar as breakevens come into play from this weekend.

Saturday's score of 136 against Port Adelaide proved the Bombers defender is still able to produce quality scores despite receiving a shellacking in the match itself.

Last week we suggested buying into the Bulldogs mids, and with Dunkley placed as the only DPP of the lot, he's a perfect target for your forward structure.

Should you be sought after a premium-priced forward, Dunkley (and Dustin Martin) look to be the leading options if you have cash to splash.

Owning a very gettable breakeven of 83 and facing the Kangaroos, Lions and Suns in his next three matches - Dunkley's price is set to sky-rocket in the coming weeks. Buy now.

In similar fashion to Ridley, should you require a premium defender, Crisp looks to be a formidable selection.

Should you somehow fail to reach the extra $14k pricing the Bombers defender boasts, change your tune to the latest smooth mover that has transitioned into Collingwood's engine room.

Crisp thrived on the ball against the Blues, a move that was also thrust upon him late last year, where he went on to score 125, 134, 138 and 93 in his final month of the season.

A much cheaper option than the aforementioned must haves, Impey's outing against the Tigers saw the Hawks speedster dominate his way to a tally of 123 points.

With his premium-esque score arrives a mouth-watering breakeven of -62, guaranteeing a significant green number to be placed next to his name following Monday's clash against Geelong.

Should you be looking to cull an underperforming mid-pricer, need to move on the injured Jye Caldwell or can't afford the stunning SuperCoach top-scorer in Taylor Walker, Impey is a clever inclusion for your side.

A contrasting opening two rounds would have Stephenson coaches scratching their heads.

But fear not, the opening round roost of 112 points gifts Stephenson a gettable breakeven of 55 ahead of this weekend's clash against the Bulldogs.

Hopefully the drop in CBA's from 10 to 4 is just an anomaly in what is shaping to be an impressive debut season at Arden Street for Jaidyn Stephenson.

It has been a difficult opening fortnight for arguably the competition best SuperCoach scorer, producing scores of 77 and 75 in Round 1 and 2.

Should Neale have a carbon copy outing from 2020 against his opponents for the next month, he'll be looking at scores of 113, 167, 157 and 142 against the Magpies, Dogs, Bombers and Blues respectively.

Like most premiums, particularly the ones priced above $700k, they're likely to still end up as one of your best options come the end of the season, so best to stick-fat through the poor scores early before the inevitable turnaround.

Currently in over 66,000 sides, the Blues midfielder is yet to live up to his pre-season hype despite the 24 CBA's in the opening two rounds.

A breakeven of just 6 just about guarantees a price rise, but with the aforementioned $212,800 Impey looking the goods, an early sideways trade to the Hawks forward could see you earn some extra coin in the long run.

Should you be one of the unlucky coaches to own the Bombers recruit, you'll be looking deep into the forms of the mid-priced forwards and hoping to unlock a gem.

In line with Caldwell's extended absence, those that own the Bombers ruckman will be scrambling to find an appropriate successor given their tricky pricing.

Should you not own the must-have rookie option that is Matt Flynn, your trade options are simple.

The Sydney trio of Errol Gulden (136 points), Braeden Campbell (118) and Chad Warner (94) have once again proven to be must-haves, with Gulden the pick of the bunch - boasting an average of 137.5 and currently ranking fourth overall in SuperCoach.

Giants ruckman Matt Flynn backed up his stellar Round 1 score of 140 points with an admirable 78 against the Dockers.

James Jordon impressed once again with an 82 point outing against the Saints, while Tom Highmore (77), Lloyd Meek (82) and Tyler Brockman (77) also put up strong scores.

Should Downie remain unnamed for Round 3 (annoying enough that the Hawks' team selections won't come out until Sunday night), I'll be looking to ship the Hawthorn midfielder to land the enticing James Jordon.

It will remove my only chance of a captaincy loophole unless one of the other rookies faces the axe, but Jordon's breakeven of -87 is too good to miss.