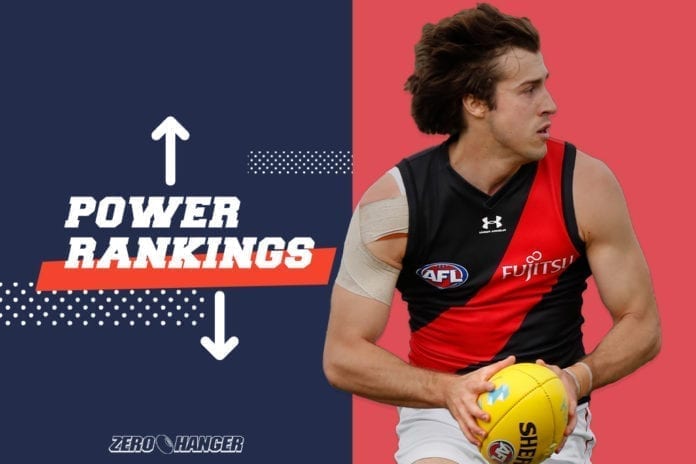 It was another tricky week for tipsters and Power Rankers alike – perhaps the hardest yet.

Several sides fall back to earth while sleeping premiership favourites begin to awaken. Where does your side sit after another huge weekend?

That was a big statement by the Power on Sunday after critics swooped on their loss to the Lions a week before. They knuckled down all day against the tough Giants and received their reward late in the day, pulling away in the fourth. A first genuine scalp and a game clear on the ladder – that’s surely deserving of first place on our rankings.

The Lions looked on track for another impressive win at half time, but were completely torpedoed out of the water by an irrepressible Cats outfit in the third quarter. We’re still high on them after their four straight wins but after a comfortable run at the Gabba it’s now time for the Lions to prove they can stick with the best away from home.

That third quarter was the best sixteen minutes of footy we’ve seen all season. That’s not the stuff of preliminary finalists – that was flag-winning football. After going a year without stringing together back-to-back wins, the Cats have won three in a row and are now poised perfectly for a finals assault.

The Bombers are sitting very pretty – in the four and with a game against Melbourne still up their sleeve. But their win against North came at a cost: Conor McKenna will need surgery for a broken finger while Dylan Shiel is set to miss two weeks after a high bump on Curtis Taylor.

Four points are only ever four points, but that win felt like a whole lot more for the Pies after a tumultuous few weeks. After a first quarter blitz, the Pies were happy to sit back and play Hawthorn’s game of attrition, and they ran out comfortable winners. A huge game against the Cats looms next week.

We were mightily impressed with their conversion rate last week, when they beat the Hawks easily despite an inferior inside-50 count. But the trend is not the Giants’ friend: they’ve been beaten in the count every game so far this season, and their worst differential came on the weekend, down 18 entries to the Power. That’s not good enough for a team who is supposed to be a flag fancy.

In wet conditions and with a bevy of players missing, Damien Hardwick would have taken any win – although even he seemed a little embarrassed in the post-match presser. If the Tigers can survive this five-week period, it could still be 2019 all over again come October/November/December.

Two comfortable wins for the Eagles against perhaps the two worst teams in the comp: it’s hard to read a whole lot into them just yet. But after the vultures were circling just two weeks ago, they’re now 3-3 and heading home to enjoy what could be the most significant home advantage ever seen. A big derby ahead.

The Dogs are our new Power Rankings yo-yos. They’re seemingly impossible to gauge after their three-game run was knocked on the head by the Blues in a 52-point thumping on the weekend. It only got ugly in the final quarter but they were second-best all day. Luke Beveridge has 11 rounds to show his team is an actual finals threat.
<Embed from Getty Images

At quarter time, the Saints were in the top four and dreaming of finals contention. Maybe that’s why they forgot they were still in a game against the Dockers, who have kept every contest close this year despite their lowly position. While they rallied late, that was a serious wake-up call. No team will count themselves out now against the Saints, and nor should they.

After Richmond frustratingly became a good side, Carlton solidified themselves as the AFL community’s whipping boys – they haven’t disappointed in recent years. But now, after a big win against the Bulldogs and their first taste of the top 8 eight in years, they mightn’t be the butt of all jokes for much longer. We still need to see much more – that was their first four-quarter performance all season. A win against Port next week and Blues fans can dare to dream.

Maybe the Rising Star will stay on the Gold Coast after all? Izak Rankine picked up where Matt Rowell left off, almost proving the match-winner in his debut. It might not be until next season, but we can’t wait to see those two together.

“They just died a slow death”: Club great Dermott Brereton summed Friday night up better than most. The Hawks struggled to get anything going all night, and their inability to move the ball constructively out of defence is becoming a recurring theme. For the first time in years, a serious spotlight has to be put on coach Alastair Clarkson.

Izak Rankine stole most of the headlines, but the Demons got the win they desperately needed. After Rankine levelled the scores late in the final term, Melbourne did just enough to eke out a win. We still need to see much more from them to not write off 2020 as just another disappointing season.

That was the win of the round and perhaps the season, and they’ll deservedly travel home to Perth with their heads held high. Back-to-back wins have salvaged their season – a derby win will well and truly kickstart it.

All is not well in North Melbourne, and that’s not just because they’re one of Victoria’s coronavirus hotspots. Their footy side has been in freefall since opening the season with two wins. A dysfunctional forward line and a lack of all-round genuine talent are two of the several serious problems plaguing the Kangaroos.

The Swans aren’t unfamiliar with accusations of negative, dour football – but, unlike in the glory days, they’re no longer chalking up wins. Their injury woes continue, with Josh Kennedy and Isaac Heeney both likely to miss serious weeks. Time to draw a line through the season, we think.

Thank you, Adelaide. There are too many teams who are good one week and bad the next. The Crows, blissfully, show nothing every week. That makes our job a lot easier, and for their troubles, they’ll collect a nice shiny spoon at season’s end.