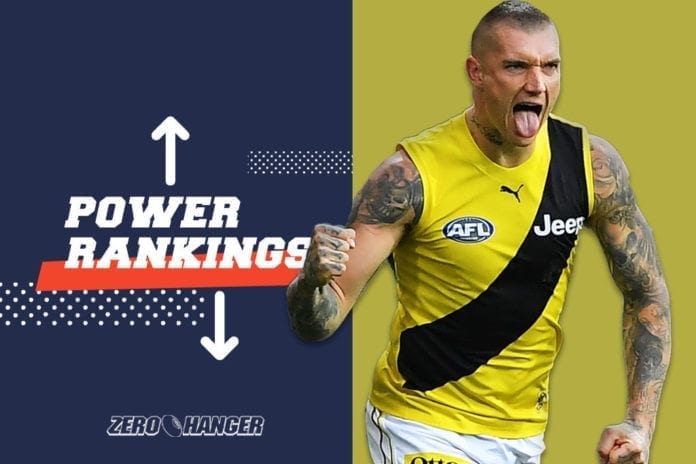 Seventeen games, made up of sixteen-minute quarters: it’s been far from the home and away season we all expected. But that’s a wrap, and now, finally, the real stuff is set to begin. Where did your side finish in our Power Rankings, in what has surely been the wildest and most unpredictable season in living memory?

They didn’t top the regular season ladder, but make no mistake – the Tigers are the team to beat (on that note, actually, the minor premiers haven’t won the real thing since 2013). Richmond easily accounted for the Crows on Saturday afternoon, buoyed by the return of Shane Edwards and David Astbury. Much still hinges on the fitness of several of the Tigers’ big-name stars, but if they do re-gain Dion Prestia, Shai Bolton and Tom Lynch for their Qualifying Final against Brisbane, good luck.

Pushed by the Pies at various stages, Port had every answer on their way to clinching the minor premiership. Remarkably, they’ve topped the ladder at the end of every round. They haven’t had an identical story in our Power Rankings, and we haven’t been the only ones not to brand them as premiership favourites. But rankings are one thing, and actions are another. The Power have the chance to let the latter do the talking as they head into their Qualifying Final against Geelong.

The Lions secured a top-two spot with a comfortable win over the Blues, and all eyes now turn to their finals campaign. At the very least, another straight-sets fade-out won’t cut it – and with a familiar foe waiting in their Qualifying Final, that possibility can’t be ruled out. On the other hand, with a Gabba Grand Final waiting, no side will want to face a Lions side with their tails up on the big day (sorry, night). They can start building that momentum with a win against the Tigers.

That win told us exactly one thing: the Cats will have a double chance in the finals. Coach Chris Scott will struggle to find too many other takeaways, except perhaps the seamless return of Gary Ablett, who looked like he hasn’t missed a step. In the years to come, no one will remember an ugly win late in the home and away season – but they will for what comes next. They will fancy themselves against the Power, who they smashed by 10 goals earlier in the year.

The Swans nearly did them a favour, but the Eagles couldn’t quite clinch a top four spot and will now play elimination football from here out. In the end, their Gold Coast hub from hell at the start of the season has come back to haunt them. If they manage to win a big final or two in Queensland, though (read: the big one), expect those demons to be exorcised pretty quickly. First things first, though: they must navigate a crunch elimination final against the Pies on their own turf.

Deservedly, the Dogs will play finals, although they left it about as late as it can come. Fremantle were competitive on Sunday night but the Dogs’ class shone through in the end, running out comfortable winners. They might very well be dreaming of 2016, but their first assignment is a finals win: they haven’t had one since Grand Final day four years ago.

The Pies stuck thick all night, and certainly put themselves in a position to topple the high-flying Power, but it wasn’t quite to be. A daunting trip west to face the Eagles on their home turf awaits, who have looked nigh unbeatable there this season. If this elimination final is anything like the two finals these sides played against each other in 2018, we should be in for a belter.

The Saints have finally broken their finals drought, and their season will be a success no matter what happens in their elimination final. Looking at the odds, many have St Kilda making up the numbers – but they won’t fear the best sides in the competition, having knocked off Port and Richmond while coming up just two points short against Brisbane in the regular season.

The Demons were clearly the comp’s 9th best side – and that’s an honour exactly zero Melbourne fans will be thrilled about. But if, according to coach Simon Goodwin, the side overachieved in 2018 and underperformed last year, is this really what they’ll settle for? More off-field turmoil brings with it the promise of what is sure to be a turbulent summer for the Demons

A quiet end to a quiet but promising year for the Dockers. Rarely have they captured the front-page headlines, but these are the years of growth premiership sides look back on as the ones that laid those crucial foundations. A long way to go before Fremantle can think about finals, let along a premiership, but this year has definitely been a step in the right direction.

The Blues were brave on Saturday night, ensuring Kade Simpson didn’t go out in a blowout, but they were never really in a position to send the club champion off with a win. Plenty to work on as they head into the off-season – not least their habit of conceding 30-point runs, which sunk them against the Lions and plenty of other times in 2020.

They had stiff competition, but the Giants have staved off Melbourne, Essendon and the Hawks for the title of the season’s biggest disappointments. With their slim finals hopes hanging by a thread, the Giants gift-wrapped the Saints their first finals berth in nine years, managing a meagre three goals for the night. Their work for 2020 isn’t quite done yet – if they lose several of their out-of-contract stars, they might manage to knock themselves out of contention for 2021 and beyond before the year is out.

With nothing to play for, the Swans took it right up to a Cats side desperate for the win. Plenty to like about how Sydney rallied this year after injuries tore through their best 22, and their biggest win might have been the news star forward Tom Papley isn’t going anywhere.

It was nice of the Suns to offer the Hawks’ retiring champs a guard of honour, but someone should have told them they generally happen after the game. The Suns were training cones against a side who had lost 11 of their last 12 coming in. For their part, Gold Coast have finished off their season with just one win from their last 10 games in what has been yet another late season fadeout for the club. Brighter days still beckon in 2021 and beyond.

It was an unexpectedly anxious wait, but the Crows will finally get their hands on their first wooden spoon in club history. A super September shouldn’t erase their absolutely dismal run up to that point, but there are much better signs moving into 2021 than we were expecting just a few weeks ago.

The Hawks wound back the clock to their glory days against the Suns – you know things are going well when you have the luxury of throwing retiring captain and one-goal-wonder Ben Stratton forward to double his career goal tally late in the day. Still a bad year for the Hawks, but that day in the sun will help, no doubt, with making the off-season feel a little shorter.

It’s tough to believe this side was only knocked out of the finals race a few weeks ago. They rallied late against the Demons but couldn’t quite do enough to give outgoing coach John Worsfold a send-off. Both coach and club seem relieved that they are going their separate ways, and that, really, is a bit of an indictment on both.

They mightn’t have done enough to win the spoon, but it’s okay, North – in our hearts, you deserve bottom spot. One last reminder to close out this season: the Kangaroos started the season 2-0. The only takeaway: North were stiff that Gill didn’t shorten the season even further – let’s say, to a two-game exhibition tournament.