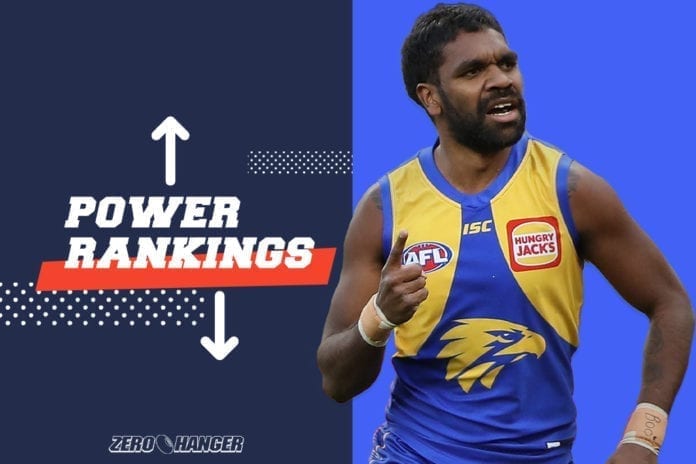 With a few weeks gone since our last Power Rankings, it’s fair to say the AFL hasn’t stood still in the meantime. Seasons have been revived and others have been buried as the regular season swings towards a dramatic conclusion.

Just remember that our rankings have taken into account the last two weeks (for some teams, that’s three games), rather than just your side’s most recent game.

Another comfortable win for the Eagles, who had all the answers for a Hawks side who landed one or two tame punches. That’s now seven in a row for a team who looks close to unbeatable at home. Good luck to the rest of the comp if the whole finals series is played in Perth.

Monday: belt a top four challenger, Friday: smash the top team. Not a bad week’s work for the Cats, especially on the percentage front – they now boast the best percentage in the league and by some margin (11% better than the next best). That could be critical come the home straight, with the top four race looking likely to be split by percentage for at least a few sides. But on that form, the Cats might not need to care –  it’s the top two they’ll have their sights set on.

A win is a win, but that is as ugly as they come. If they don’t learn how to kick in front of goal, they’re not going to seriously challenge come finals time. They shot themselves in the foot again, kicking 7.11 and missing several gilt-edged opportunities, especially in the first quarter. Only five games now to get things right before the finals.

Gee that was ugly. The Power went down by 7 points – to Tom Hawkins himself. Whatever they do from here out before the finals, it’ll be hard for Ken Hinkley’s side to shake the label of pretenders. A few bad nights of sleep ahead for Port’s defenders, probably involving terrifying dreams where they’re frozen in place unable to move – as a big Cat ragdolls them from left to right.

The Tigers are well in the hunt for the top four, but with a number of red-hot sides around right now, they might miss out. Still, no one will relish playing the Tigers in the finals, in whatever capacity, and especially if all their troops return in time.

That’s the turnaround the Saints needed after their humbling at the hands of the Cats. They had that game sewn up at half time, and were probably already looking ahead at next weekend’s big clash against the Lions. A win against Brisbane and their top four hopes will look back on track.

Well – there it is. It didn’t quite come last game, or the week before (against the Crows and the Kangaroos respectively), but here’s the game the Demons needed to prove they really can do what they did in 2018. They’re now in the eight with a great percentage – that percentage, actually, might make the world of difference when the finals race starts gets really hot come the end of the season.

After three losses on the bounce, the Crows were just the team the Bulldogs needed to build their confidence back up again – and they sure didn’t disappoint. The only post-game headache for coach Luke Beveridge would have been splitting Bailey Smith (37 disposals), Marcus Bontempelli (33 disposals) and Aaron Naughton (6 goals) in the coaches’ votes.

There won’t be a person involved with the Giants – not least the AFL – not immensely frustrated with this football club. Unfortunately, it isn’t so hard to remember a performance worse than that one on Thursday night – try a day in September last year. But that was otherwise as bad as they come: three goals on the night against a bottom four side (your local rivals, by the way) that’s much more injury hit than the Giants are. Good luck against the Eagles next week.

A fortnight ago, top four looked gone – now, just quietly, the finals aren’t even certain for a Pies side as disjointed as we’ve ever seen them. In hindsight, the Pies’ soft run in recent weeks just delayed the crisis, but it’s here now. Their injury woes don’t look like ceasing anytime soon, either – Ben Reid (hamstring) and Brody Mihocek (concussion) both failed to finish the game.

Forget Robbie Gray – Jack Newnes is the AFL’s latest post-siren hero. And his incredible kick will go some way to healing the wounds of the Port star’s goal to beat the Blues just a month ago. That was the very definition of a smash-and-grab: they led for just two-and-a-half minutes of the game. At 5-6, the Blues still have plenty to play for.

Somehow, the Dons still have an even record (5-5-1) despite looking absolutely nowhere near it for much of the last month. Sunday’s listless performance against the Saints consigned them to just one win in the last six games – and that was a three-point win against the Crows. In fact, all season, here are the Bombers’ scalps: Fremantle, Sydney, North, Adelaide and Collingwood. Remove the Pies (who don’t look so crash-hot anymore anyway) and there’s no side close to the top-eight amongst them.

The Dockers shouldn’t have lost that, and some will point solely to the umpires after a very controversial end to the game. Yet they really were second best after quarter time, being outscored 5.9 to 2.4. Newnes’ kick had two seasons riding on it: both teams at 4-6 as it hung in the air, the loser would almost certainly be out of the finals race. That fate looks to be the Dockers’, but they’ll be plenty of positives to take out of this season whatever happens.

Again, plenty to like about Gold Coast, but Stuart Dew will be anxious to secure a few more wins before the season’s out – otherwise their trademark as a football club that fades heavily in the second half of the season will stick around. Their last win was now six games ago, against the Swans.

Now that was a shock. In the midst of an injury plague and the season gone, the Swans came out and killed their crosstown rivals all around the ground. The Giants hardly looked like scoring – their three goals all came from questionable free kicks. All in all, the future looks very bright for the Swans.

That was far from the Hawks’ worst performance all season – there was actually a bit to like after quarter time. Truth be told, though, the game was all but over by then. Alastair Clarkson’s men should be applauded for not dropping off in intensity all day – or should they? Maybe we’ve become too used to the Hawks’ fadeouts in recent weeks. After the horrible news of James Sicily’s ACL injury, it looks like things are going to get worse before they get better.

The Kangaroos weren’t perhaps quite that close against the Lions – Cam Zurhaar’s after the siren goal brought the margin to within a score. But there was still plenty to like for a team playing for pride only in these last few weeks. Time to build a platform for what Rhyce Shaw will be hoping will be a much improved year next season.

They’ll pick up a win somewhere, right? A winless season is starting to look less like a punchline and more like the most likely outcome. More ugly stats on the weekend against the Dogs, including the one called the scoreboard. Hey, if you’re going to win your club’s first wooden spoon, I guess you might as well do it in style.