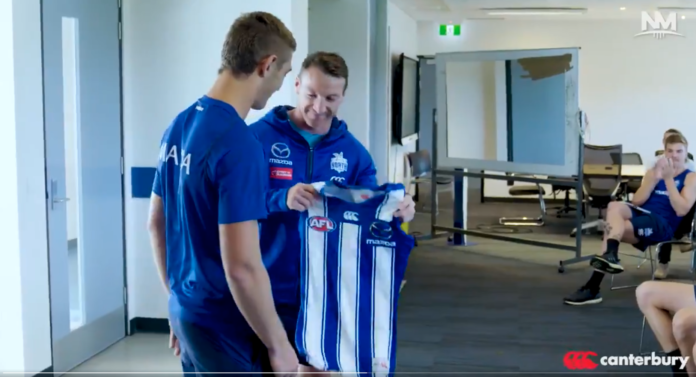 North Melbourne draftee Will Phillips will make his AFL debut in this weekend's Good Friday clash against the Bulldogs.

The Kangaroos announced on social media on Wednesday afternoon that the 18-year old would get his opportunity.

The club posted a video showing club icon Brent Harvey award his famous No. 29 guernsey to the debutant.

It's going to be a very Good Friday for our number 29 💙 pic.twitter.com/TbTzFdRn8F

SEE ALSO: 10 AFL Fantasy PODs to consider for Round 3

Phillips was drafted to North Melbourne out of the Oakleigh Chargers with Pick 3 in last year's draft.

The young midfielder was overjoyed upon hearing he would get the call up.

“I had a bit of a rush of emotion, I was trying to hold in some tears.

“What was going through my head at that point was my family who had given me so much, helped me along the journey - all the people who had just invested so much in me.

“The last three weeks for me haven’t been easy, I’ve had ups and downs, as everyone does, so to finally get the call-up and to hear that for the first time is just unbelievable and I’m so happy, I couldn’t be happier.

“I’m sure I’ll be a bit nervous come game-time but I think good nerves. I’m generally not too nervous but I just can’t wait to get out there.”

And with all good debutant announcements there is the video of the phone call to mum and dad, and this was no different.

It might have taken a while to get a hold of Dad, but it was a very special moment as Will Phillips shared the news of his debut with his parents 💙 pic.twitter.com/WNV6DeaPay

Originally retiring Harvey's No. 29, the Kangaroos brought it back when Phillips was drafted to the club.

Phillips said it was special to carry on Boomer's legacy having had the legend's backing since day one.

“He’s [Harvey] been there since day one, he backed me even when I didn’t get selected and he’s always had that belief in me, as have the other coaches, so I’m really grateful for him and hopefully I can live up to the expectation that goes with that jumper,” he said.

“I think it’s just another number I’ve got to make my own, obviously I’m super grateful to be wearing 29. It’s got a rich history at this club and looking forward to hopefully living up to that expectation without weighing me down at all and just can’t wait to pull it on, on Friday.”

The Kangaroos meet the Bulldogs at Marvel Stadium on Friday at 4.20pm AEDT.