As sport grinds to a halt due to the coronavirus pandemic, the Zero Hanger team have had a little fun figuring out which characters out of The Simpsons cartoon would best represent the 18 AFL clubs.

The club based in the ‘City of Churches’ makes this an easy choice. Ned Flanders is a devout Christian, kind-hearted neighbour and pillar of Springfield’s society.

But he also has a tough, brawny edge to him that comes out from time to time. Too bad the power stance in the 2017 Grand Final wasn’t as sturdy.

Not the cynical smoker version, but the fun and exciting Krusty the Clown. Brisbane are the showman team of the league that all neutrals enjoy watching.

Krusty has lived through extreme highs and lows, much like the Lions. Their grand performances can pick you up, but their horror shows can equally let you down!

This one relates to the scandalous actions of Carlton in the early 1990’s and 2000’s when they breached their salary cap. Fat Tony is the dark underbelly of Springfield, the big bad gangster. You get it. 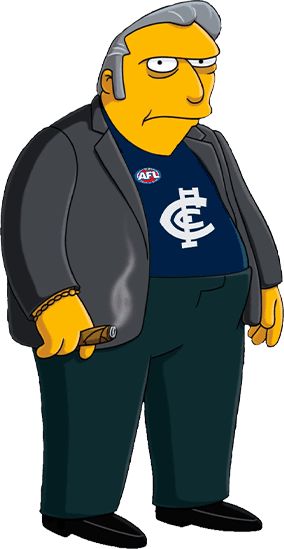 Homer is overweight, lazy, dim-witted and hot-tempered. Or in Australian terms – a good old bogan! And Collingwood fans… well, I’m sure you can fill in the blanks.

Homer is one of the most iconic and polarising characters from the show – you either love him or hate him. Much like Collingwood’s mega status in the AFL. Another grand final loss? D’oh! 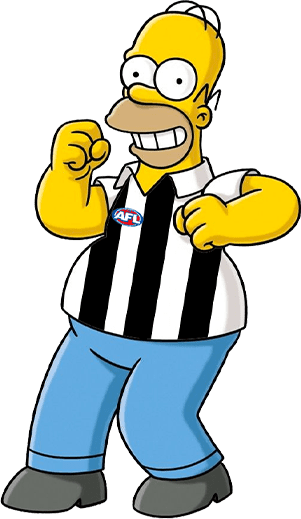 Milhouse is always optimistic but things never seem to go his way. A bit like Essendon. Think of that 16-year streak of not winning a final. And let’s not forget the supplements saga. Sorry Bombers fans, this one was easy.

For all those non-Simpson nerds, Jub Jub is Selma Bouvier’s pet iguana. Kind of irrelevant. Kind of like the Dockers.

Ahh Smithers. He is Mr Burns’ sidekick and always plays second fiddle to Springfield’s mastermind figure. Similar to how Geelong’s golden era in the 2000s will always be second-best to Hawthorn’s. Plus, Smithers gives off that nerdy vibe…

Oh, it is so easy to pick on the Gold Coast. Ralph is a simple-minded, clueless, unaware kid. Some of Gold Coast’s recruiting and drafting over the years has been truly mind boggling, and well, plain stupid. 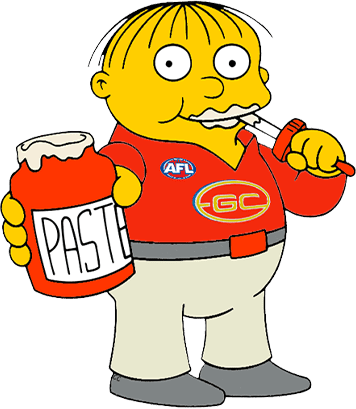 Mr Burns is the evil, greedy and wealthy owner of the Springfield Power Plant. The long-term villain of the show. Three-straight premierships show just how greedy the Hawks are. And if you can’t imagine Jeff Kennett with his hands steepled like Mr Burns, well…

The old patriarch of the family, Abe Simpson is Homer’s father and Bart, Lisa and Maggie’s grandfather. The Demons were one of the AFL’s inaugural clubs. The oldest of any football code in the world. And that fall from grace in 2019 required a walking stick just like Grandpa Simpson.

Does anyone remember Troy McClure? The actor that did infomercials? He hasn’t been really seen since season 15 of The Simpsons, Well, North Melbourne haven’t been relevant since the 90s.

Aliens! Kang and Kodos are the green octopus-like aliens usually seen in the Treehouse of Horror episodes. And anyone who has been to Adelaide Oval to see the Power play would know it feels like being on another planet surrounded by that bunch.

All non-Richmond supporters would agree there is a not-so-subtle arrogance to the Tigers nowadays. Duffman is the superhero-costume-wearing-advertising guy that shakes his hips way too much.

“Duffman says go Tiges!” Alright we get it, you’re good. 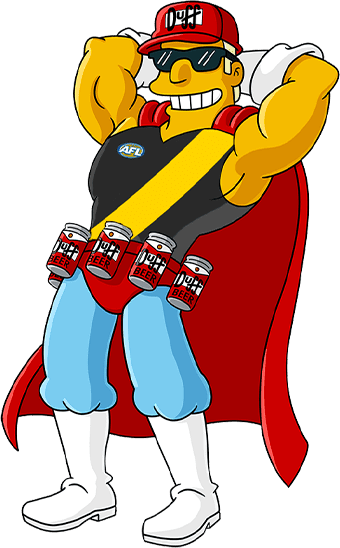 Gil Gunderson is a desperate real estate agent trying to make a bang for a buck. St Kilda are in one of the worst financial positions of any club in the AFL. They have to turn things around at some point, right?

Goody-two-shoes Lisa Simpson. Goody-two-shoes Sydney Swans. This one is pretty straightforward. Plus, does anyone really watch The Simpsons for Lisa?

Rich Texan is the stereotypical rich guy in The Simpsons that loves flaunting his wealth and firing his guns. The Eagles have big money, are a big club and the cashed-up bogans of the AFL. The battlers. Everyone is on their side. Lenny is the blue-collar worker in The Simpsons, the standard working-class citizen. What better character for a blue-collar club.