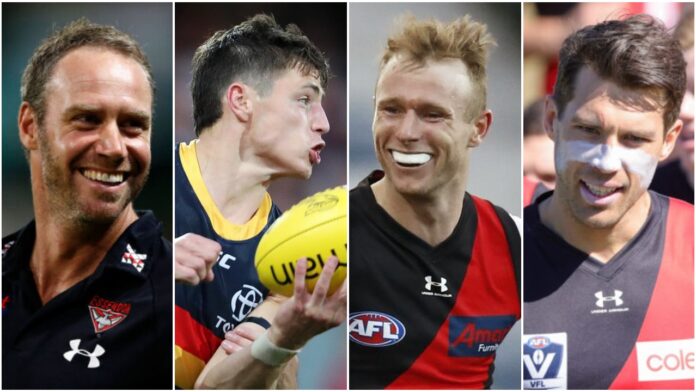 In the space of a year, Essendon have transformed their back half to quietly boast one of the deepest defences in the league.

Facing a wave of departures and injuries at the end of 2020, the Bombers were forced to get creative.

Conor McKenna had announced he would be returning to Ireland and Adam Saad surprised the club by requesting a trade to Carlton.

Veteran Cale Hooker was slowing down and was desperately needed up forward instead.

Patrick Ambrose, who had become a reliable key defender for Essendon prior to injuries, was struggling to get his body right.

The Bombers had lost all their size and experience in defence and - apart from a breakout season from Jordan Ridley - looked to be seriously lacking personnel down back.

At the end of last year, former All-Australian defender Ben Rutten became Essendon's sole senior coach and he made decisions to reshape the backline.

Rutten first turned to two forwards who were at a crossroads in their career.

One was Jayden Laverde, who hadn't played more than 10 games in any of his first six seasons in the league. The other being James Stewart, who was at equal risk of slipping out of the AFL system.

Both Stewart and Laverde were able to hold down their defensive assignments admirably, with the latter finishing sixth in club's best-and-fairest.

The Bombers also targeted fringe Saint Nick Hind, who they acquired for a proverbial bag of peanuts.

Hind, who was on Essendon's VFL list in previous years, was a revelation and soon became the poster boy for 'moneyball' recruiting.

Next, the Bombers drafted 202cm Zach Reid with pick 10 in the 2021 National Draft. The lanky defender in Reid is rated incredibly highly, and the club believes he is to be the future of their defence.

Injury-riddled skipper Dyson Heppell also returned to the half-back line where he started out his career. The captain put together his most consistent season for some time and added a cool presence in defence.

Meanwhile, Ridley continued his remarkable progression. The 22-year-old is the prototype for the modern intercepting defender and looks like a star in the making.

Added into that mix late was Tom Cutler, who suddenly showed he still had worth at AFL level. Cutler's future looked in doubt before a string of strong performances from half-back earned him another contract at the club.

Suddenly things weren't looking so bleak for the Bombers.

Through internal role changes and crafty trading, Essendon were able to create a dependable backline from little-to-no cost.

Despite struggling early, the new-look defence was quietly built as the season wore on, with Essendon only conceding 100 points on one occasions after the bye as their defensive structure grew in experience.

Another free agent is locked in 🔒 #AFL https://t.co/1CLmTndskO

The 26-year-old finished sixth in Adelaide's best-and-fairest this season and is capable of shutting down the game's best small forwards.

With Tom Papley, Cody Weightman and Jamie Elliot all kicking doing damage against the Bombers late in the year, the acquisition of Kelly will fill an important role in Rutten's lineup.

The next step is to implement the coach's new game plan.

Before arriving at Essendon, Rutten helped build a defensive structure that led Richmond to a drought-breaking premiership in 2017.

Since then, Essendon also poached Blake Caracella from the Tigers, and will now add legendary defender Alex Rance to their coaching ranks.

With their new senior coach at the helm, Essendon found themselves able to score, however they were vulnerable on transition. The Bombers conceded more points than any other side in the top-eight, something Rutten will be desperate to change this off-season.

Further headaches will be at the selection table.

“If the Bombers are to move forward, they wouldn’t have Kelly playing every game. I think he’s more a support (player),” Lloyd said.

“I loved what Jayden Laverde did this year, I think Laverde went to a new level. (Nick) Hind has added so much to them, James Stewart, they obviously got Zach Reid in the draft who you’d hope would play 22 games.

“So for me, I think Kelly would be a support to the group more so than a key figure if they’re going places."

The pressure is also on Aaron Francis to retain his spot in the side. The former high draft pick has played his best footy down back but will now need to fill Essendon's gaping key-forward hole.

Martin Gleeson's career is also in the balance. The club's defensive depth has pushed Gleeson to the outer, with the 27-year-old currently out-of-contract at the Bombers.

Meanwhile, there is a nervous wait on Hurley. The veteran turns 32 next year and some inside the club fear his hip could prevent him from getting the farewell he deserves.

There is still plenty left for the Bombers to figure out over the off-season. But their backline, which loomed as a disaster 12 months ago, is now their strongest asset.